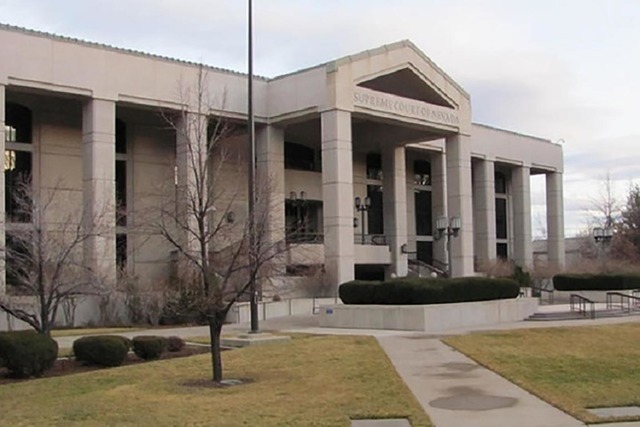 CARSON CITY — The Nevada Supreme Court tapped the brakes Friday on a law that would impose new registration requirements on sex offenders and subject thousands of them to community notification, but not before a state website briefly went live with the information.

The order signed by Justices Michael Douglas, Michael Cherry and Mark Gibbons temporarily blocked the Department of Public Safety from implementing the law and posting thousands of sex offender names and addressed online.

But the expanded list of thousands of names that includes people never before subject to community notification were available for about 4½ hours. The new website went live at 4 a.m., and was taken down at 8:40 a.m. after the agency was made aware of the court’s ruling.

“We had staff come to work at 2 a.m. and started preparing the switchover,” James Wright, DPS director, said Friday. “At 4 a.m. it went live.”

Wright said the Supreme Court’s stay was issued at 8:15 a.m. and the site was taken down 25 minutes later.

“Once we were notified we quickly got that thing turned off,” he said.

Wright said the agency was implementing the law and he hoped no harm was done during the brief, early morning hours when names were available.

A Clark County judge on Thursday denied an emergency motion filed on behalf of 17 unnamed plaintiffs seeking to stop the law. Attorneys then filed an emergency writ late Thursday with the Nevada Supreme Court.

“Given the time constraints and the assertions in the petition, we conclude that a temporary stay of enforcement of AB579 is warranted to maintain the status quo while this court considers the petition and supporting documents,” justices wrote in the brief order Friday.

“It’s just a temporary stay but it’s something. It’s much better than it going live,” said Maggie McLetchie, who is representing the unnamed plaintiffs with her law partner, Alina Shell.

It’s unknown how long the stay will remain in effect or the next step the court will take.

“We’ll just maintain that authority to do this, and then we just have to wait to see what the court does with it,” Wright said. “That’s where it has to get sorted out.”

Nevada lawmakers approved AB579 in 2007 to comply with the federal Adam Walsh Child Protection and Safety Act enacted the year before by Congress and signed by President George W. Bush. The federal government warned states it would lose federal grant money unless they complied.

The Nevada law changed how sex offenders are classified. Previously, people convicted of sex crimes were assessed by specially trained mental health professionals and rated on their risk of re-offending. Offenders deemed low risk, or Tier 1, were not subject to community notification.

Under the new law, tier levels are based on the conviction and age of the victim without regard to circumstances. Thousands of Tier 1 offenders were notified by letter in June that they were re-assessed to a Tier 3 — the highest risk level — and would be subject to reporting every three months for life. Some offenses occurred decades ago, and some are no longer considered crimes under state law.

The number of Tier 3 offenders jumped from around 300 to more than 3,000 with the law change. Now, even Tier 1 offenders will be publicly identified.

Offenders were notified of their new tier rating by letter last month. The lawsuit claims many offenders who had court orders relieving them of their sex offender status were told by the state they would now be subject to lifetime reporting.

It also argues there is no process under the new law for offenders to challenge their status or correct errors, and that the public notifications will subject them and their families to harassment, possible violence and job losses.

On Thursday, a legislative committee approved $545,000 for the Criminal History Repository to hire more staff to implement the law and meet the demand of running fingerprints and palmprints every three months for Tier 3 offenders.