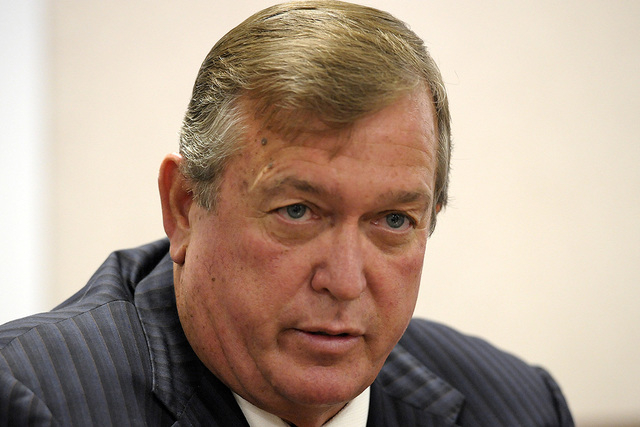 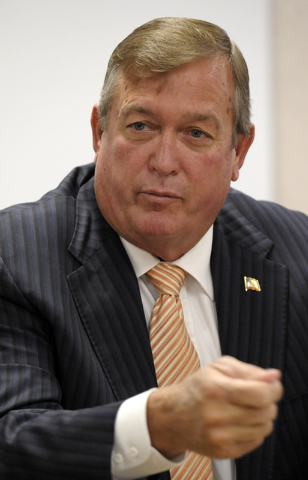 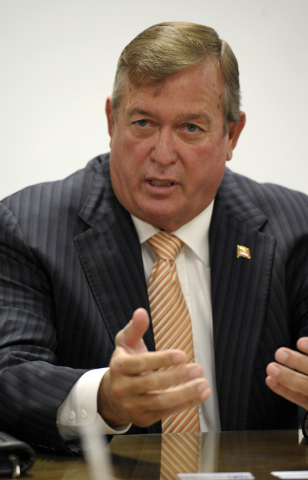 Congressional candidate Cresent Hardy said he believes young immigrants brought to the United States illegally by their parents should be allowed to stay to work, study and become U.S. citizens, while adults could seek legal status or go to the back of the line if they want to become Americans.

In an interview with the Review-Journal editorial board, the Republican Assembly member from Mesquite challenging U.S. Rep. Steven Horsford, D-Nev., also said he likes some parts of Obamacare — including requiring insurance coverage for people with pre-existing conditions — but wants to end federal coverage mandates and let states run their own health care programs.

“Let state legislation decide how they want to do it,” said Hardy, explaining that he’d like to replace President Barack Obama’s Affordable Health Care Act with something better. “I think that’s what our Founding Fathers wanted: let the states be laboratories of industry.”

Hardy is the underdog in his bid to oust Horsford from the 4th Congressional District, a vast area that includes urban North Las Vegas in Clark County, part of Lyon County and all of Esmeralda, Lincoln, Mineral, Nye and White Pine counties.

Hardy, known as a conservative in the Nevada Legislature, told the newspaper’s editorial board that Congress — including Horsford — has become too partisan and promised to reach across the aisle to get results and avoid gridlock.

Hardy said he would “go back and try to get people to come together and do what they’re supposed to be doing back there.”

Members of Congress should “stop worrying about their dang job and next election and work together across party lines for those ideals that we can come together with consensus,” he added.

On immigration, for example, he said he agrees with Democrats that the system needs reform, but he would prefer a “step by step” approach to fix problems such as border security separately from other issues such as visas and citizenship.

Hardy said he would have voted for a bill that passed the House Aug. 1 that included $694 million for federal agencies dealing with a stream of young Central American immigrants coming to the U.S. to seek asylum. The money would help speed processing to determine if they’re legitimately fleeing violence and should be allowed to stay or should be returned home.

Hardy said he also would have voted for another bill that would end President Barack Obama’s Deferred Action for Childhood Arrivals program, which the president imposed in 2012 without congressional approval.

Yet Hardy said he supports allowing the young undocumented immigrants in the program to stay in the U.S. and apply for work, school and citizenship because they grew up here after their parents brought them in illegally. He said he believes Congress should approve a new law instead of Obama working around the body, using his executive authority.

“They should have the opportunity to become citizens if that’s their desire,” he said of the so-called DREAMers.

As for their parents, part of an estimated 11 million illegal immigrants in the U.S., Hardy said he believes most of them don’t want to become citizens but want to become legal so they can work and live here without fear of deportation.

“I think you give them a pathway to legal status, not necessarily to citizenship,” he said, adding that if some want to become Americans they should start at the back of the line.

“That last in, first out policy should stay in place,” he said.

On Obamacare, Hardy said he likes some aspects of the law, including letting adults keep their children on their insurance policies until they’re 26 years old. But he said he wants Congress to repeal the federal mandate and replace the federal law by essentially throwing health care back to the states to run.

“Let the people of the states determine (health care), much like Massachusetts did,” he said, referring to the state program that provided a pattern for Obamacare.

On other issues, Hardy said:

■ Obama should have left some “boots on the ground” in Iraq instead of pulling out all troops, leaving an opportunity for a militant Islamic group to take control of vast sections of the country. Now it’s too late to put troops back there, and so he agrees with the president’s current policy.

■ The administration should not withdraw troops completely from Afghanistan, but instead leave a big enough “residual force” to protect remaining Americans and to help “make sure the government functions.”

■ Congress must balance the budget instead of continuing to run up the debt and deficits.

■ The federal government should maintain Social Security and Medicare programs since Americans have invested in them and deserve to reap the benefits. However, he said he isn’t opposed to some reforms, such as providing Medicare vouchers to pay for health care instead of direct payments to doctors and hospitals.

■ The tax system needs to be simplified because the IRS has made it too difficult and costly for Americans and businesses to comply with complicated forms and rules.

■ The federal government should eliminate all subsides, including support for farmers, oil producers and alternative energy programs. Government shouldn’t pick winners and losers.

■ The government should stop extending unemployment benefits. “People are staying on the benefits in some cases because they don’t want to just go find a job for three or four months,” Hardy said.