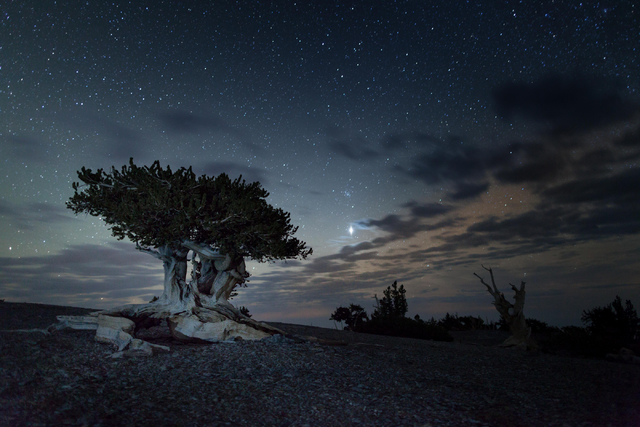 Stars fill the sky above an ancient bristlecone pine tree in this undated photo taken at Great Basin National Park, which could be home to a new research telescope as early as next summer. (Courtesy National Park Service) 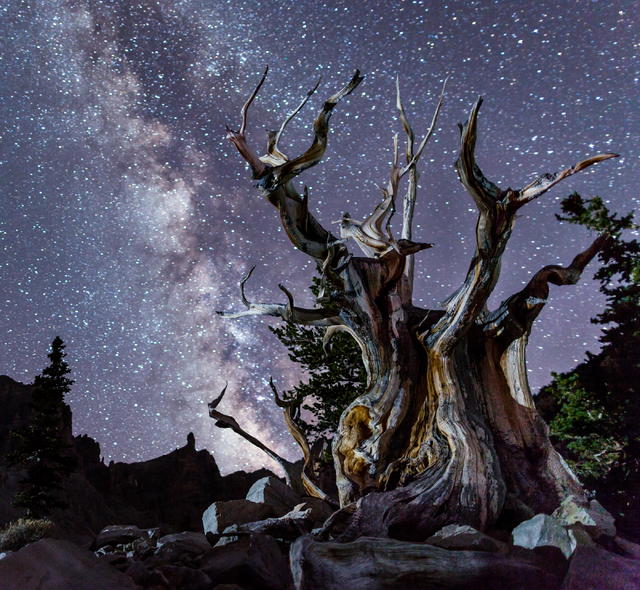 People are being kept in the dark at Great Basin National Park, and they couldn’t be happier about it.

The remote preserve 300 miles northeast of Las Vegas just won certification as an International Dark Sky Park, a rare designation that places it alongside other starry wonderlands such as Death Valley National Park in California, Grand Canyon-Parashant National Monument in Arizona and Capitol Reef and Canyonlands national parks in Utah.

John Barentine is program manager for the International Dark-Sky Association, a Tucson, Ariz.-based nonprofit that works to protect night skies from light pollution.

He said the sky above Great Basin isn’t merely dark. It’s “as close as you can get to what the night sky might have looked like before the invention of electric light.”

The big reason is simple geography. The largest community within 100 miles of the park is Ely, population 4,100, 60 miles to the west. The closest major light sources — Salt Lake City and Las Vegas — are blocked by mountain ranges and dimmed by more than 200 miles of distance.

But it took more than isolation for Great Basin to qualify as the first certified Dark Sky Park in Nevada.

Barentine said the application process took about year and included a review of satellite data, collection of on-the-ground light measurements and the development of a lighting plan for the park.

Nichole Andler, chief of interpretation at Great Basin, said the park had already switched to red lights at the Lehman Caves Visitor Center to protect night vision, but a “significant portion” of the lights around the staff housing area will need to be adjusted or replaced.

To keep its dark sky certification, the park has committed to completing half the work this year and the rest in 2017, Andler said.

The International Dark-Sky Association has now certified more than 30 parks around the world. Great Basin joined the club this week along with a national park in Ireland and three national monuments near Flagstaff, Arizona, the first place to be recognized by the association back in 2001.

“We’re really excited about the opportunities this will bring to us,” Andler said.

Already, the dark has attracted a new research telescope set to go on line in the park late this summer.

Becky Mills is chairwoman of the nonprofit Great Basin National Park Foundation, which raised about $800,000 last year to build and operate the observatory.

She said both the scope and its 12-foot-diameter dome have been ordered and construction should get underway soon. Representatives from three different Shoshone Indian tribes blessed the site during a ceremony March 21.

Mills said the observatory is on track to open Aug. 25, the same day the National Park Service will celebrate its 100th anniversary. Those involved in the project plan to mark the occasion by opening the dome and pointing the scope at the heavens for the first time.

There’s a name for that in the world of astronomy, Mills said. “It’s called ‘first light.’”