Former Bishop Gorman running back Nathan Starks said on Twitter he will transfer to Cherry Creek High School in Colorado for his senior season.

Starks, who was dismissed from Bishop Gorman in late April for a violation of school rules, tweeted “my future school” and attached a Google Earth image of Cherry Creek on Sunday.

Starks could not be reached for comment. A message left for Cherry Creek director of athletics Jason Wilkins was not returned Monday.

The 6-foot, 210-pound Starks rushed for 1,821 yards and 27 touchdowns as a junior at Gorman and is one of the nation’s leading running back recruits in the class of 2014. He has offers from Alabama, Arizona, Colorado, Duke, Nebraska, Notre Dame, Oklahoma, Southern California, Texas, UCLA and Utah, according to Rivals.com.

Nevada Interscholastic Activities Association rules state that athletes who transfer from a private school such as Gorman must sit out 180 school days or one year. As a result, Starks would not have been eligible to play at any school in Nevada this fall, forcing him to transfer out of state to play his senior season.

Cherry Creek, located in the Denver suburb of Greenwood Village, went 6-5 last season but is traditionally one of the top programs in Colorado. The Bruins have won eight state titles and were state runners-up in Colorado’s large-school classification in 2004 and 2008.

Starks was the No. 26 player in the country in Rivals.com’s initial rankings for 2014, but dropped to No. 147 on the most recent list after it was reported he was kicked out of school. He is ranked No. 46 overall and the No. 8 running back by Scout.com.

Starks’ future has been a hot topic on Internet message boards and Twitter for the past two weeks.

In a story published May 21 on 247sports.com, a recruiting website affiliated with CBSSports.com, Starks said he was looking at transferring to a high school in California or Arizona.

Soon after, a handful of the nation’s top recruits — including quarterbacks Kyle Allen of Desert Mountain (Ariz.) and Manny Wilkins of San Marin (Calif.) — tweeted at Starks and recruited him to play at their school.

Starks is the second player with Las Vegas ties to transfer to Cherry Creek in the last three years. Former Arbor View running back Taylor Wooten landed at the school in 2010 and played the final half of his senior season for the Bruins. 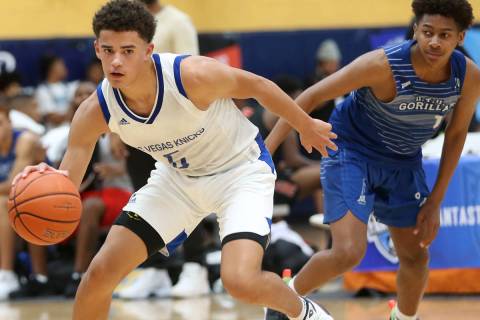