BEATTY — A Spring Mountain football fan brought a megaphone to the Class 1A state championship Saturday, and used it to tell the Golden Eagles that they were champions — before the game had even started.

Heck of a premonition, because they are indeed champions.

For the second time in three years.

Spring Mountain scored 26 unanswered points in the second quarter to separate from Tonopah en route to a 60-38 victory at Beatty High School — and the second state title in program history.

The man with the megaphone watched in approval. He was right.

“Two in the last three years, we’re doing the right things — trying to get these boys to try to understand that if they continue to fight and stay in the fight, success is upon them,” Masden said. “It’s awesome, awesome to give these guys that opportunity to have something to rely on for the rest of their lives.”

The Golden Eagles (10-1) assemble every August atop Mount Charleston, where their home base — a youth detention center — is located. Some have played football before. Most haven’t, and Masden and his coaching staff spend the regular season teaching the players how to play football, and more importantly how to care for one another.

This year’s group rallied around quarterback Da’Juan Brown, who staked his claim as the best player in Class 1A with 330 passing yards, five passing touchdowns, 208 rushing yards and two rushing touchdowns against the Muckers.

“I’ve been playing sports my whole life and I never got to win one of these until I got to Spring Mountain,” Brown said while clutching the state championship trophy. “It opened up my eyes to how much I value my freedom and how much I want to make it. I couldn’t do it without (my teammates).”

“We all wanted this as bad as the coaches did,” Brown said. “My coaches always told us that no matter where you go or where life takes you, you might not be able to play for a state championship again. So you know what? Me and my team took advantage. We had to.” 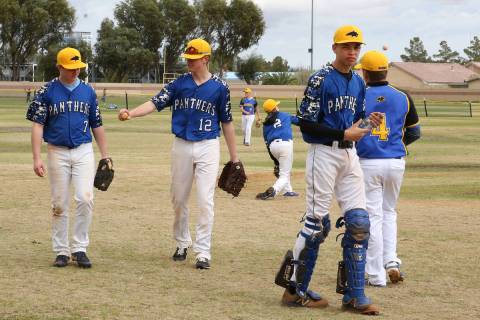 Pahranagat Valley (Class 1A), The Meadows (2A) and Boulder City (3A) claimed One Nevada Cup titles. Bishop Manogue won in 4A.