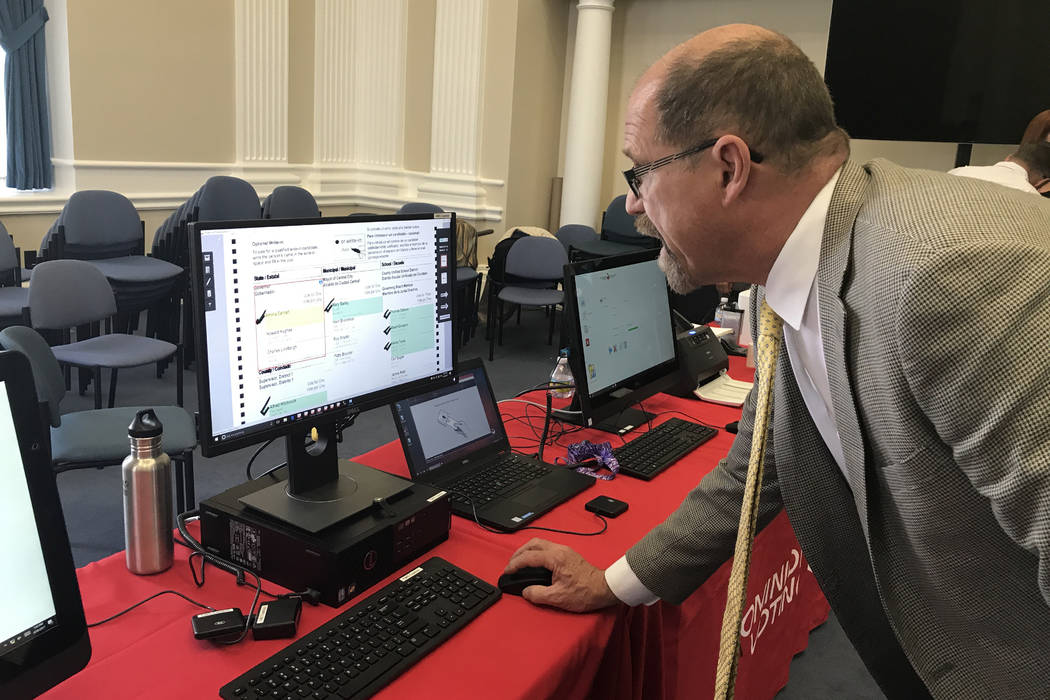 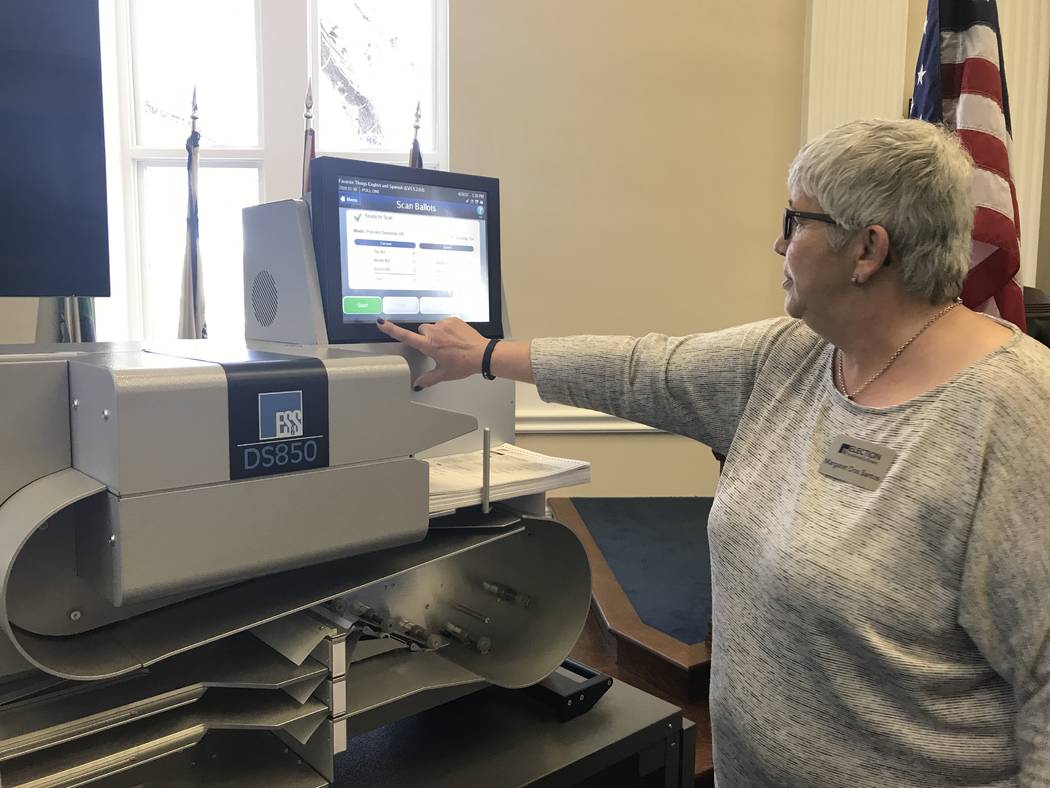 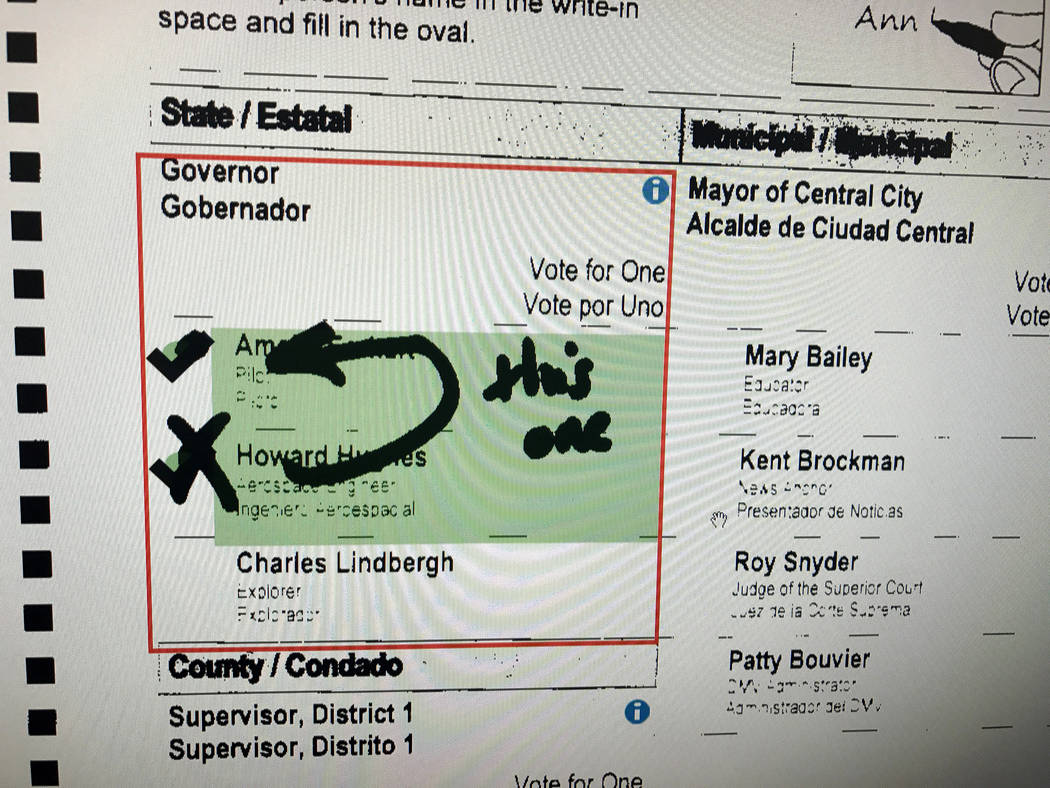 CARSON CITY — Nevada lawmakers and election officials got a sneak peek at a new generation of voting machines last week as the state eyes replacing its aging ballot-counting fleet.

“We’re looking at doing it for 2018,” Secretary of State Barbara Cegavske said of a possible timeline to have new machines in place.

The secretary of state’s office invited two vendors certified in Nevada — Election Systems & Software and Dominion Voting — to show off their wares Wednesday in a daylong open house at the Capitol.

From a technical standpoint, Nevada’s current machines, some more than 10 years old, are ancient.

“We definitely need to look at getting the system replaced,” said Clark County Registrar Joe Gloria, who has been raising the issue for several years. “As they age, there are more concerning performance rates.”

It’s not that the machines don’t work. But they need a lot of tinkering.

Clark County, with more than 1 million active registered voters, has 4,500 machines. The county isn’t waiting on the state to replace them, though financial assistance would be welcome, Gloria said.

Luanne Cutler, registrar for Washoe County, said the county has a 10,000-square-foot warehouse to store its 1,327 voting machines, which must be charged once a month to keep them operational.

“It’s a monumental undertaking to take care of them all,” Cutler said.

The machines are also heavy (weighing 48 pounds) and bulky. It’s a struggle for poll workers, many of whom are retired and senior citizens, she said. “I don’t think there’s any question across the board of the need.”

At the demonstration last week, the two vendors showed off advancements in election system technologies.

Both ES&S and Dominion use touch-screen machines and scanners for tabulation.

Writing on the screens can be made bigger, and the color contrasts altered. There are adaptations for braille, and headphones where the ballot can be read to voters.

“I think sometimes we lose sight of folks who have challenges and disabilities,” she said. “Another thing … sometimes we don’t think about adults not having the literacy skillset to navigate through their ballot.

“Having the option to have things read to them really facilitates and overcomes that barrier.

“It’s really cool to see the adaptability,” she said.

Counting absentee ballots can slow down tabulation, especially when voters indicate their choices outside the circles or use a check mark instead of filling in the bubble.

It’s not uncommon for a voter to cross out one choice, make another and draw in an arrow saying “This one!”

Scanners read that as an overvote, where someone voted for more candidates than allowed. The ES&S system will kick those ballots out into a separate bin. Poll workers then inspect the ballot to determine voter intent and create a duplicate ballot to count.

The Dominion system includes software that sends a digital copy of the questionable ballot to an adjudication team to examine.

The ease of handling mail-in ballots was a plus for Assemblywoman Maggie Carlton, D-Las Vegas.

“Having them scanned in so, if there’s any issues, they can be addressed and then processed — I thought was really good,” she said. “I’m glad to see they have a system to deal with the mail-in ballots, make it easy to make sure they are processed timely.”

Some counties already use electronic poll books, which allow election workers to check the signatures and precinct information for voters anywhere in the county.

State lawmakers have bills pending to authorize vote centers, where voters from anywhere in a particular county could go to cast a ballot on Election Day. A similar process is already used for early voting and some municipal elections.

“You’ll be able to vote anywhere. You won’t have to go to your precinct polling place on Election Day,” Carlton said.

“You don’t have to have the precinct tables,” said Clerk-Recorder Sue Merriweather.

Political parties like them, too, she said, because they get quick updates on who voted — allowing them to target get-out-the-vote efforts to people who haven’t yet voted.

Clark County has used some for about a decade, Gloria said, and it plans to get enough for the whole county.

Carlton, who chairs the Assembly Ways and Means Committee, is hoping to find money in the state budget to help pay for the upgrades.

She’d like to see a new system in place for next year’s election.

“I think this is a very important thing to do at a midterm, because turnout at a midterm election is typically lower,” Carlton said. “There will be time to transition and get folks ready, and that way, if there’s a problem, we’ll be ready for the presidential year in 2020.”