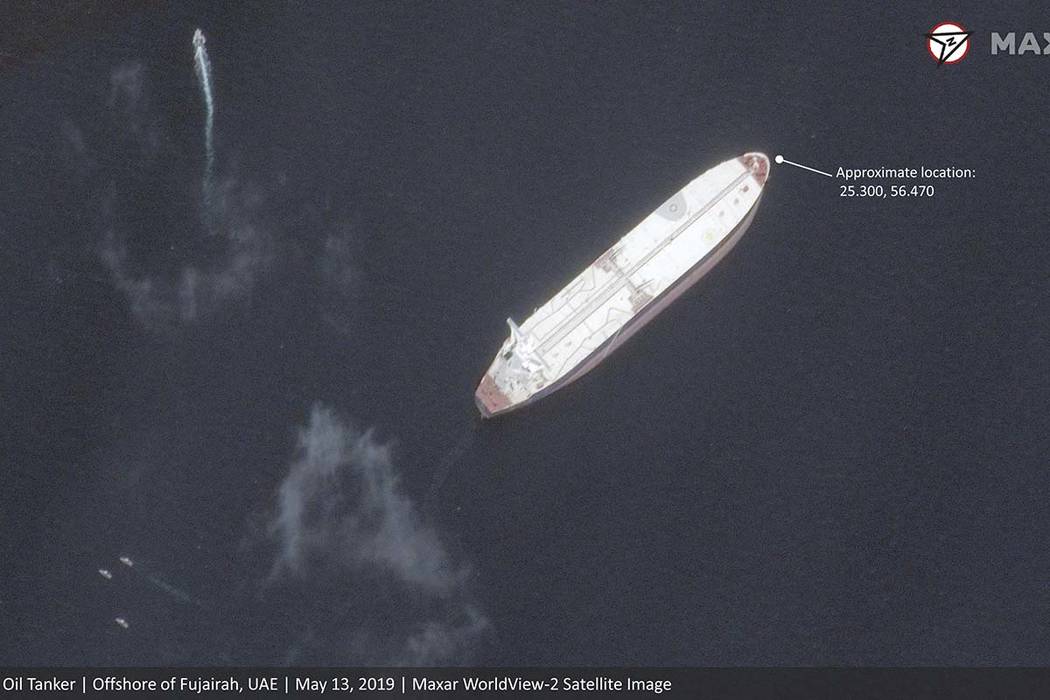 This satellite image provided by Maxar Technologies shows the Saudi-flagged oil tanker Amjad off the coast of Fujairah, United Arab Emirates, Monday, May 13, 2019. As many as four oil tankers anchored in the Mideast were damaged in what Gulf officials described Monday as a "sabotage" attack off the coast of the United Arab Emirates. (Satellite image ©2019 Maxar Technologies via AP) 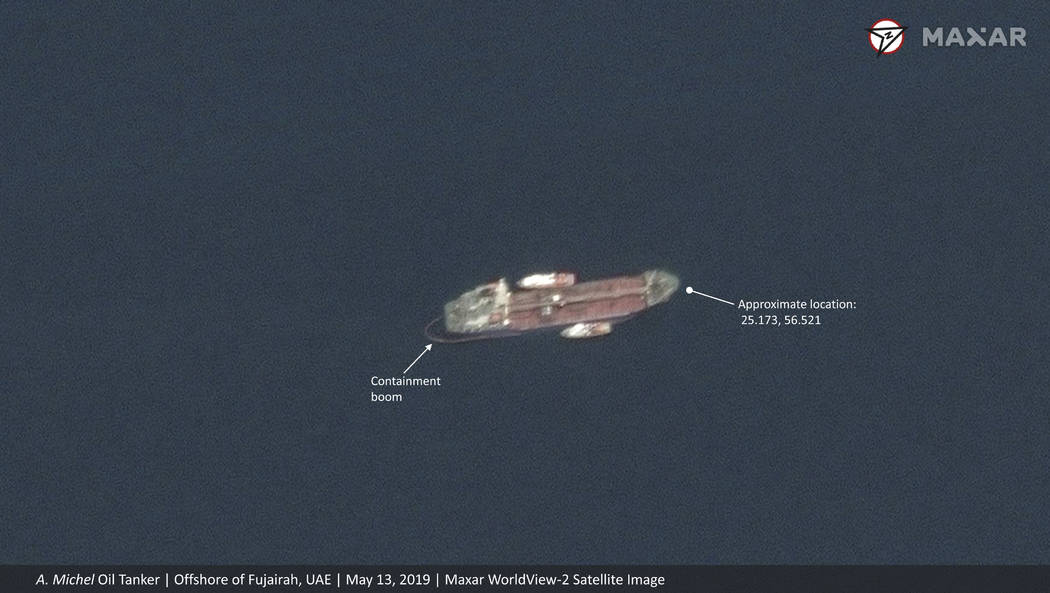 This satellite image provided by Maxar Technologies shows the Emirati-flagged oil tanker A. Michel off the coast of Fujairah, United Arab Emirates, Monday, May 13, 2019. As many as four oil tankers anchored in the Mideast were damaged in what Gulf officials described Monday as a "sabotage" attack off the coast of the United Arab Emirates. (Satellite image ©2019 Maxar Technologies via AP) 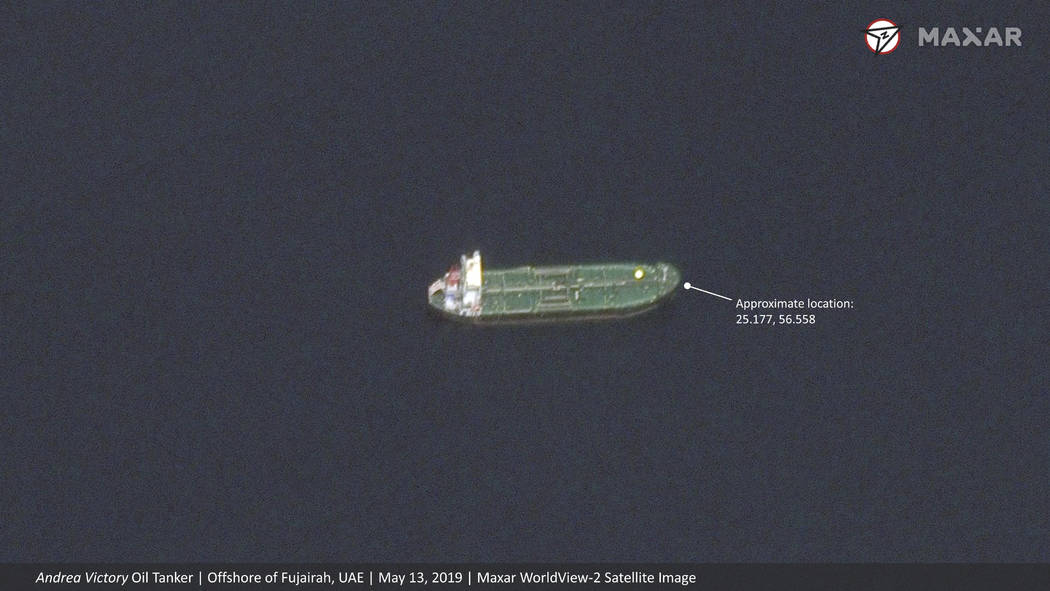 This satellite image provided by Maxar Technologies shows the Norwegian-flagged oil tanker Andrea Victory off the coast of Fujairah, United Arab Emirates, Monday, May 13, 2019. As many as four oil tankers anchored in the Mideast were damaged in what Gulf officials described Monday as a "sabotage" attack off the coast of the United Arab Emirates. (Satellite image ©2019 Maxar Technologies via AP) 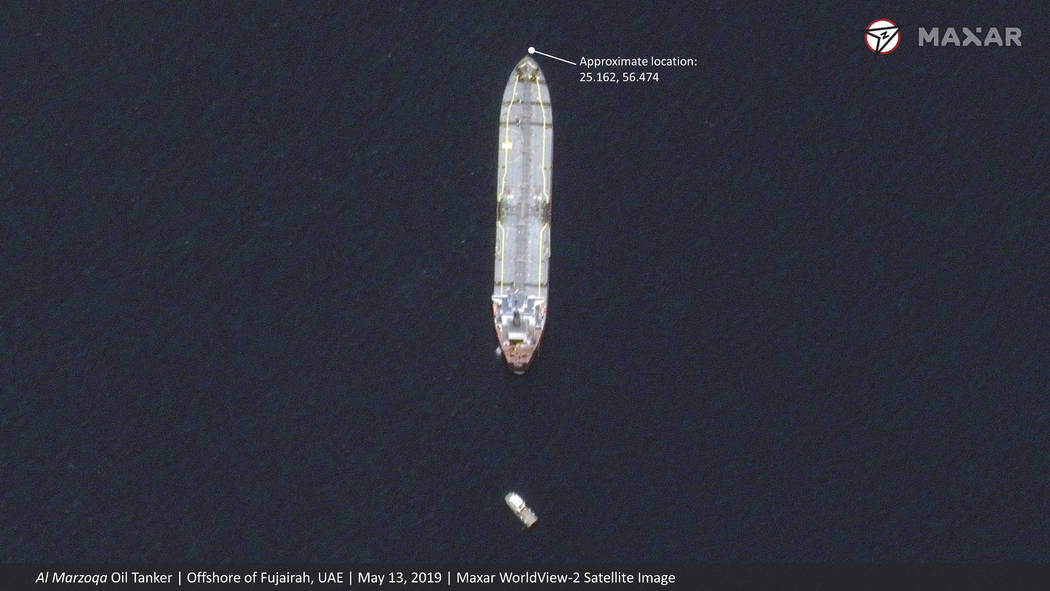 This satellite image provided by Maxar Technologies shows the Saudi-flagged oil tanker Al Marzoqa off the coast of Fujairah, United Arab Emirates, Monday, May 13, 2019. As many as four oil tankers anchored in the Mideast were damaged in what Gulf officials described Monday as a "sabotage" attack off the coast of the United Arab Emirates. (Satellite image ©2019 Maxar Technologies via AP) 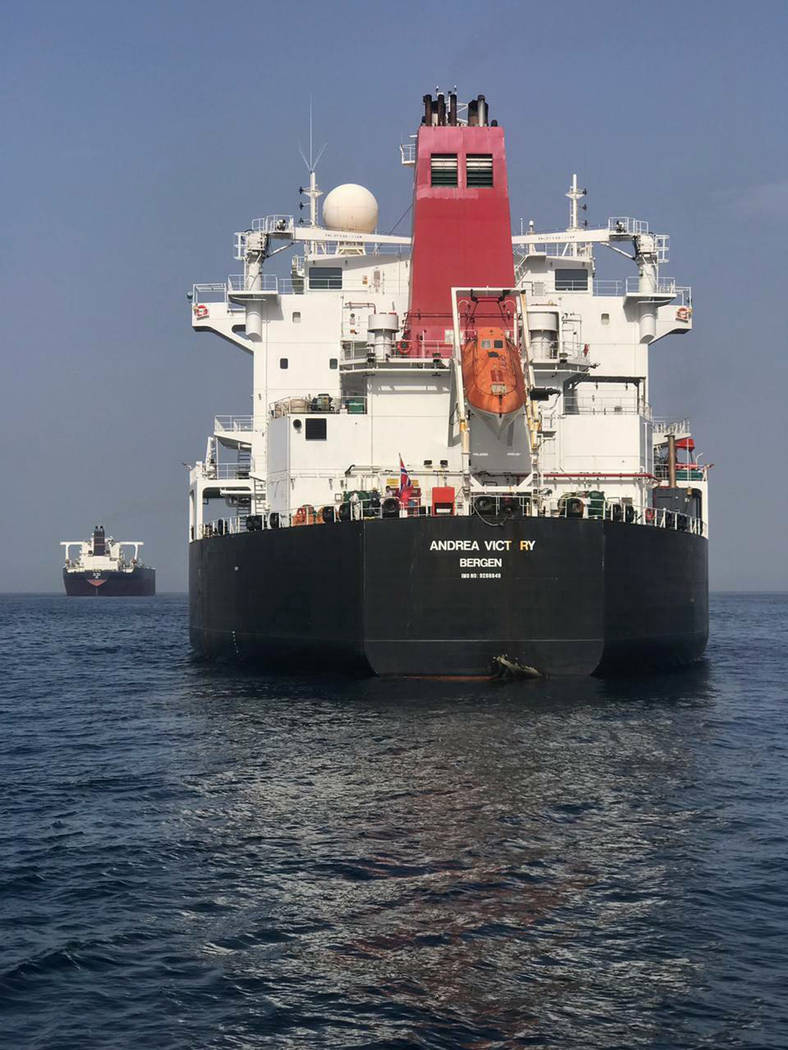 DUBAI, United Arab Emirates — An adviser to Iran President Hassan Rouhani says President Donald Trump is moving toward war with Iran instead of trying to reach a deal.

Hessamoddin Ashena said in a tweet Tuesday: “You wanted a better deal with Iran. Looks like you are going to get a war instead.”

The Trump administration sent the aircraft carrier USS Abraham Lincoln and a bomber squadron to the region in response to unspecified threats by Iran against American interests.

Ashena believes Trump is being misled by U.S. National Security Adviser John Bolton. He says: “That’s what happens when you listen to the mustache,” referring to Bolton’s bushy mustache.

Iran’s Supreme leader Ayatollah Ali Khamenei says his country won’t negotiate with the United States and there will be no war between the two countries.

Iran’s state TV quoted Khamenei on Tuesday as calling negotiations with the U.S. “poison” and saying: “This is not a military confrontation, because no war is going to happen.”

Khamenei, who has final say on all state matters, said: “Neither we, nor they are seeking war, they know that it is not to their benefit.”

The Ayatollah’s comments come as tensions have escalated between Washington and Tehran.

Earlier, Trump dismissed a report that the U.S. is planning for a military conflict with Iran.

Trump was responding to Tuesday’s report in The New York Times that the White House is reviewing military plans against Iran that could result in sending 120,000 U.S. troops to the Middle East if Iran attacks American forces or steps up work on nuclear weapons.

Trump says it’s “fake news.” He says he would “absolutely” be willing to send troops, but that he’s not planned for that and hopefully won’t have to plan for that.

He says if the U.S. was going to get into a military conflict with Iran, “we’d send a hell of a lot more” troops.

Trump spoke to reporters at the White House before traveling to Louisiana.

The head of the Arab League has condemned attacks claimed by Yemen’s Houthi rebels against an oil pipeline and other energy infrastructure in Saudi Arabia.

Ahmed Aboul-Gheit says in a statement on Tuesday that the attacks were a “serious threat to the regional and international security, and the world economy.”

He says the Arab League stands by Saudi Arabia to “counter these terrorist threats aimed at stabilizing the region.”

The attacks on Saudi oil targets marked the latest incidents challenging Mideast security after the alleged sabotage of two Saudi oil tankers and two other vessels off the coast of the United Arab Emirates on Sunday. The attacks come amid heightened tensions between the U.S. and Iran and the unraveling of the Iranian nuclear deal with world powers.

The Houthi rebels said their drone attack on Saudi Arabia was the biggest since the civil war in Yemen erupted in 2015.

Yahia al-Sarei, a spokesman for Houthi-affiliated forces, said in a video statement that seven drones were involved in Tuesday’s attacks against an oil pipeline and other energy infrastructure in Saudi Arabia.

He says the attacks were a “legitimate response on the crimes committed against the Yemeni people.”

Spain’s defense minister says the government’s decision to remove a Spanish frigate from a U.S.-led combat fleet approaching the Persian Gulf was taken for “technical reasons” and had no political motive.

Defense Minister Margarita Robles said on Tuesday the decision “is not an expression of distaste” over the crossing into the Strait of Hormuz of the fleet headed by the USS Abraham Lincoln aircraft carrier.

The U.S. fleet is heading to the Persian Gulf as tension mounts between the United States and Iran.

Robles told reporters the Gulf mission was not included in a cooperation agreement signed two years ago that placed the Méndez Núñez frigate on a training mission with the U.S. fleet.

She says the frigate will return to the fleet once normal operations resume, declining to give an opinion about the U.S. policy toward Iran.

Spanish media, citing government sources, said Spain is concerned it could be dragged to an unwanted conflict as a result of the crisis between Washington and Teheran surrounding the unraveling nuclear deal.

Iran’s foreign minister says the sabotage attack on oil tankers off the coast of the United Arab Emirates this week was meant to stir up wider conflict in the region.

Mohammad Javad Zarif spoke on Tuesday while visiting New Delhi for meetings with Indian officials. He says they discussed the recent incidents of “suspicious activities and sabotage in the region.”

Zarf says he had “previously predicted this sort of activities, aimed at escalating tension in the region.”

The official IRNA news agency also quoted Zarif as saying he discussed the dangers imposed by “hard-liners in the U.S. administration and the region.” He did not elaborate.

Zarif regularly accuses the Trump administration, Israel and Saudi Arabia of pushing the region into war.

ned to elaborate on the reasons of the sudden change.

Spanish media, citing government sources, said Spain is concerned that it could be dragged to an unwanted conflict as a result of the crisis between Washington and Teheran surrounding the unraveling nuclear deal with world powers.

The Spanish frigate was the only non-U.S. vessel in the fleet, which is scheduled to sail to California in late October.

New satellite photos obtained by The Associated Press show the oil tankers that Gulf officials alleged were the targets of “sabotage” off the coast of the United Arab Emirates.

The images, provided on Tuesday by Colorado-based Maxar Technologies, show the oil tankers. Two are from Saudi Arabia, one is Norwegian and the other is Emirati.

A boom surrounds the Emirati oil tanker, suggesting officials worry about an oil leak from the vessel.

Otherwise, the vessels do not show signs of massive damage. The Norwegian ship sustained a hole just above its hull in the incident.

A U.S. official, who spoke to the AP on condition of anonymity to discuss the ongoing investigation, said all the ships sustained similar damage.