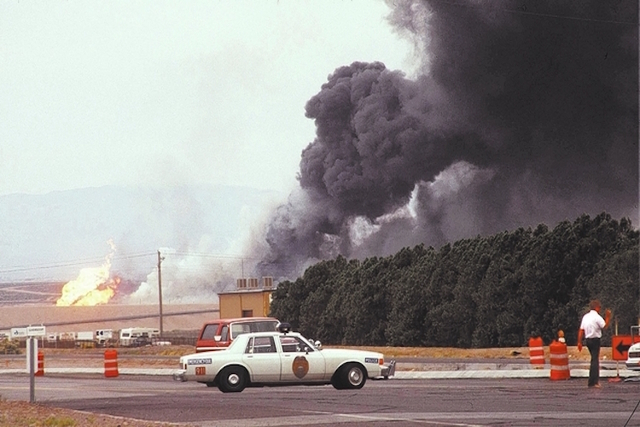 Black smoke billows from the Pacific Engineering Production Co. of Nevada plant in Henderson on May 4, 1988, after a fire and explosions rocked the Las Vegas Valley. Two were killed, and hundreds were injured. PEPCON manufactured ammonium percholorate. (Las Vegas Review-Journal File Photo)

Twenty-eight years ago, the Las Vegas Valley experienced one of the largest explosions in history — PEPCON.

A fire started inside a building at Pacific Engineering and Production Corporation of Nevada’s (PEPCON) plant on May 4, 1988. In four minutes, the fire rapidly spread and ignited three massive explosions.

Here are five things you may not know about the explosion that rocked the southern end of the Valley:

The explosion made history

According to a NASA case study on the disaster, the PEPCON explosion, which was the result of sparks from a welding torch setting ablaze a fiberglass infrastructure, created the largest domestic, non-nuclear explosion in recorded history.

PEPCON was one of two American producers of ammonium perchlorate, a chemical found in solid fuel rocket boosters that is used for NASA Space Shuttles and military-grade weapons, according to the City of Henderson Historical Society.

“Although classified as less hazardous than mixed fuel,” according to NASA, “ammonium perchlorate greatly accelerates the explosive properties of combustible material.”

Two years before the explosion, the Challenger space shuttle had exploded mid-flight, prompting NASA to halt its exploration program. Although PEPCON continued to produce ammonium perchlorate, there was no demand for the chemical and supply continued to build up at the company’s factory.

At the time of the explosion, NASA believed the plant had a stockpile of more than 4,000 tons of chemical on hand, which allowed the initial fire to spread at such a rapid pace.

The impact was felt miles away

The explosion caused an estimated $100 million in damages and impacted structures in a 10-mile radius of the PEPCON plant, which was located on what is now the junction of U.S. Highway 95 and the 215 Beltway.

Two of the biggest blasts measured 3.0 and 3.5 on the Richter scale at observatories in California and Colorado, NASA found. Based on the damage in surrounding areas, investigators also compared the explosion to a 1-kiloton air-blast nuclear detonation.

Shockwaves destroyed nearby buildings in its wake — windows were shattered, walls were cracked and doors were broken.

In addition to completely destroying the neighboring Kidd Marshmallow plant, the Las Vegas Hilton also reported that its windows had shattered as a result of the blast.

Joe Hedrick, a dock worker at PEPCON, said at the time, “The final explosion went off, and (PEPCON) basically disappeared. Boulder Highway looked like a war zone. There was glass everywhere and very few people were out.”

Cindy Tremel told the Henderson Historical Society that windows were blown inwards and front doors blown off homes in her neighborhood.

“There were family pets everywhere wandering the area looking terrified and lost. It took quite awhile for us and the City to put things back together. It was an experience I will never forget,” she said.

PEPCON employees were leaving for lunch

The initial fire erupted as many employees were leaving for lunch. Seventy-five of the plant’s 77 employees were able to escape by running or driving through the desert.

Of the two PEPCON employees killed in the blast, one was confined to a wheelchair and was unable to escape in time while the other victim, also handicapped, remained on scene to alert emergency dispatchers, NASA’s case study stated. Upwards of 370 people suffered injuries.

Several of the injured were first responders from the Henderson Fire Department, according to Clark County, suffering cuts from the engine windows shattering as they approached the area.

After reopening, the company experienced another explosion

Although PEPCON never reopened at the site of its original plant, the company did start over again — with a new name and in a new state.

The company moved its operation to Cedar City, Utah, and changed its name to Western Electrochemical Company.

According to Deseret News, the company experienced its second fatal explosion in nine years in August 1997.

One person was killed and four were injured in what officials described as an “industrial accident.” Before moving to Utah, the one fatality, Danny Balduck, had worked as a supervisor during the PEPCON explosion in Henderson, Deseret News reported.

Contacted Caitlin Lilly at clilly@reviewjournal.com. Find her on Twitter: @caitielilly_