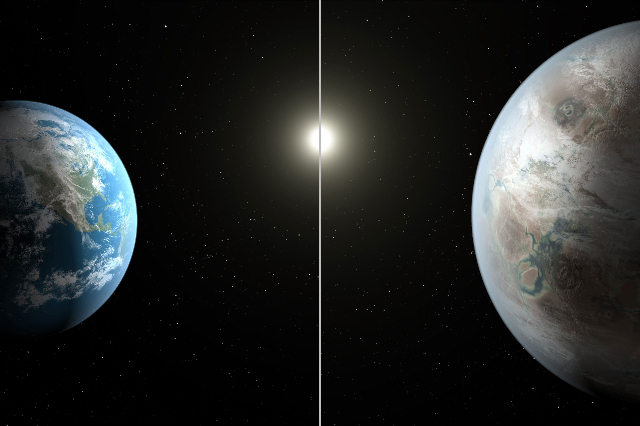 This artist‘s concept compares Earth, left, to the new planet, called Kepler-452b, which is about 60 percent larger in diameter. (NASA/JPL-Caltech/T. Pyle/CNN) 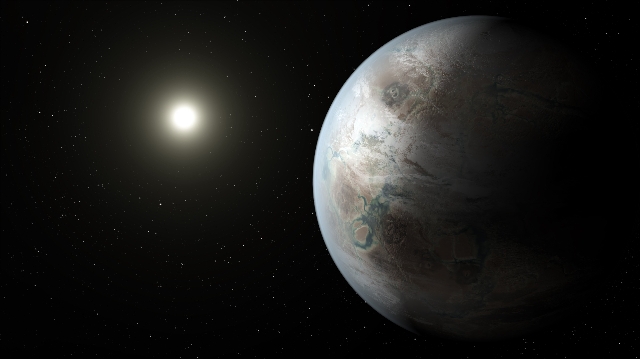 This artist's concept depicts one possible appearance of the planet Kepler-452b, the first near-Earth-size world to be found in the habitable zone of star that is similar to our sun.

The Search for Extraterrestrial Intelligence Institute has its eyes — and soon possibly one of the United States’ premier telescopes — focused on an anomaly that some astronomers can’t quite explain.

Users on the online astronomy crowdsourcing interface, Planet Hunters, discovered a peculiar light pattern between the Cygnus and Lyra constellations a few years ago. The group uses publicly available data gathered by NASA’s Kepler Telescope, which has been tasked with finding Earth-like planets by searching for the periodic dimming of stars that might suggest such a planet is passing by.

After a number of users noticed the peculiarity, it was sent to the group’s advisory science team that includes Yale postdoctoral astronomy student Tabetha Boyajian.

“It did definitely spark some lively discussions on the talk boards. We scrolled through the discussion boards and superusers, and they let us know that there’s something we should be watching out for,” Boyajian says.

“What was unusual about that was the depth of the light dips, up to 20 percent decrease in light, and the timescales (of light variation) — a week to a couple of months.”

So what’s the explanation? Could it be from a swarm of comets? Some sort of intergalactic phenomenon that Earthbound scientists haven’t discovered yet? Or an effect of planet-sized structures built by some sort of alien civilization?

Jason Wright, a Penn State astronomy professor, saw Boyajian’s data and can’t quite explain it. But in a post Thursday to his website, he cautioned against jumping to conclusions — as some apparently have — that intelligent beings far away are behind this oddity.

“My philosophy of SETI,” Wright wrote, referring to the search for extraterrestrial intelligence, “is that you should reserve your alien hypothesis as a last resort.” He also cited “Cochran’s Commandment to planet hunters … : Thou shalt not embarrass thyself and thy colleagues by claiming false planets.”

“It would be such a big deal if true, it’s important that you be absolutely sure before claiming you’ve detected something, lest everybody lose credibility,” the astronomer added. “Much more so for SETI.”

The star, identified by researchers as KIC 8462852 — though Wright calls it “Tabby’s star” and his team labels it the “WTF star,” after the subtitle to Boyajian’s paper, “Where’s the flux?” — is roughly 1,465 light-years from Earth, or about 8.6 quadrillion miles.

Along with a group of colleagues, Boyajian published an academic paper last month about the star and concluded the light peculiarities could have been the result of comet fragments.

This is “a plausible but contrived natural explanation,” according to Wright.

“I would put low odds on that being the right answer,” the Penn State astronomer said. “But it’s by far the best one I’ve seen so far (and much more likely than aliens, I’d say).”

Boyajian herself stressed “the necessity of future observations to help interpret the system,” which is why she and her cohorts took the paper to Andrew Siemion, the head of the University of California-Berkeley’s SETI Group. They wanted answers, and they said top-notch telescopes were needed to get them.

“At first I thought they were absolutely nuts — it wasn’t until they told me their data had been vetted by the Kepler team at NASA,” Siemion said.

The California-based astronomer, who’s been working on the search for extraterrestrial intelligence for about 10 years, called the findings “very atypical.”

“This is one of maybe only two or three times we’ve been contacted by an astronomer who says there’s something we don’t understand,” he said. “It is a very strange object.”

Request put in to use radio telescope

Siemion submitted a series of proposals to use telescopes — including the Green Bank Telescope in West Virginia, which the National Radio Astronomy Observatory calls the premier single-dish radio telescope — to look deeper into the anomaly.

The Green Bank telescope would be a good fit, given that SETI involves the search for extraterrestrial intelligence using, of all things, radio waves. According to Siemion, “There are particular types of radio waves that as far as we know can only be produced by technology.”

“The advantage is that it’s very easy to distinguish,” he said. “Lots of the galaxies produces radio waves. If we see lots of energy in an area, it’s an unmistakable marker of technology.”

The SETI Institute, which is based in Northern California, expects to hear the results of its request within the next month or two.

“We’re going to look very closely, as closely as we can. We are limited in terms of how long we can view a target given the curvature of the earth (and) instrumentation,” Siemion said. “If we’re awarded the observation, we’ll have between 24 to 36 hours with a variety of different radio receivers.”

While those involved in this effort are hesitant to jump to conclusions about what exactly is going on, they do think it’s worth digging into it.

According to Yale’s Boyajian, “Information will allow us to confirm something or rule something out. We’re excited to learn all about this system — we want to figure it out.” 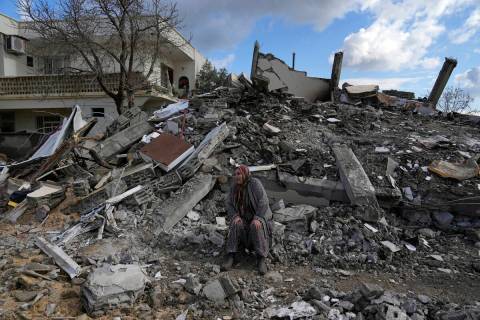