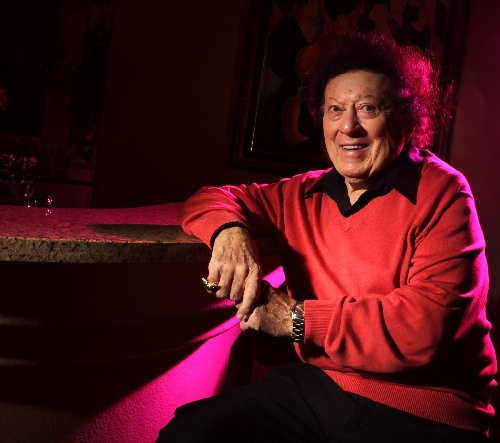 Comedian Marty Allen remembers it well because he was the matchmaker.

“I was opening at the Flamingo with Mama Cass, and my wife, Frenchy, was getting her hair and makeup done for opening night,” said Allen, a longtime Las Vegas resident.

Someone called Caesars Palace and “they sent over a girl from the beauty parlor,” recalled Allen, best known for his many appearances on “The Ed Sullivan Show” as half of the Allen & Rossi comedy team with Steve Rossi.

When the attractive 30-something makeup artist arrived, Allen thought about setting her up with his friend Borgnine.

He asked her if she was married. She wasn’t. He mentioned a birthday party in Los Angeles. Would she be interested in joining Allen and his wife and Borgnine.

Allen arranged to have Borgnine pick her up for the dinner at Chasen’s, a West Hollywood hot spot known for its entertainment A-list crowd.

It turns out it wasn’t technically a blind date after all.

Tova told longtime friends Mel and Marilyn Larson that well before their introduction, she had worked on Borgnine in the Caesars Palace salon, and they both later remembered it.

To most of her neighbors at the Regency Towers at the Las Vegas Country Club Estates, Anna Kelly was known as the frail octogenarian often seen pushing a baby stroller with her favorite pet onboard.

She was among the nurses in the 67th Field Hospital that treated the worst of the wounds while supporting the 9th Army on its push across Europe from Normandy to Berlin.

She met Gen. George Patton, helped save American lives during the Battle of the Bulge, and cared for men and women who were barely alive in liberated Nazi death camps.

A memorial was held Sunday at the Regency Towers to remember a woman with an amazing story.

“Kobe Bryant said that this year’s Olympic basketball team could beat the 1992 Dream Team. Of course they could. All the guys from the ’92 Dream Team are, like, 50 years old.” – Jimmy Fallon