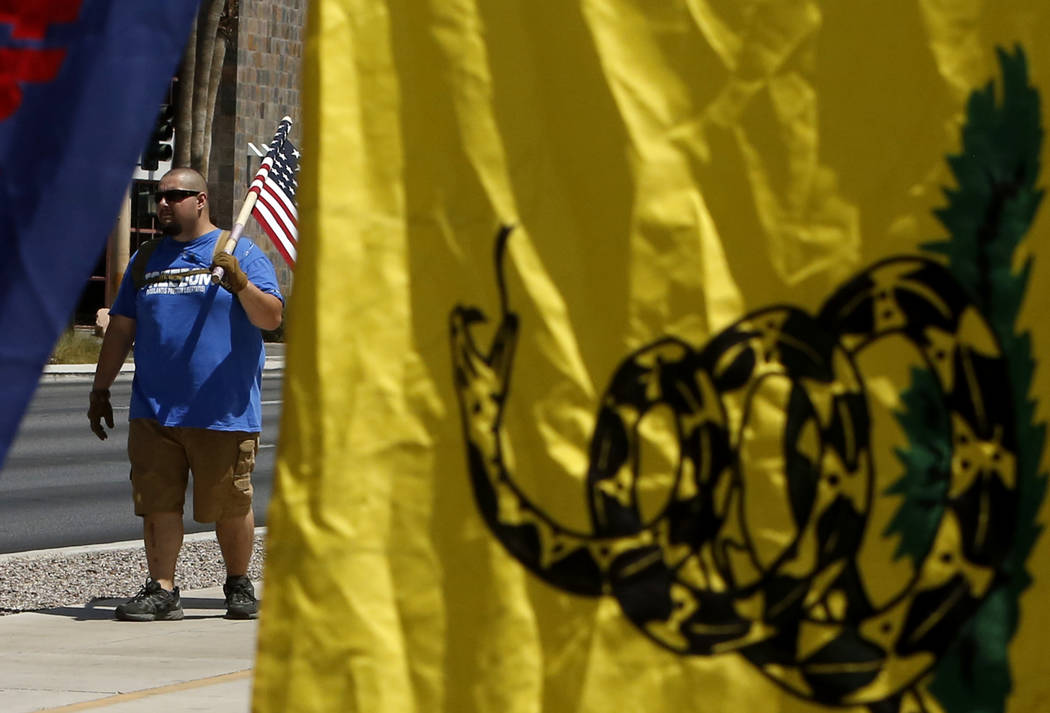 Troy, who declined to give his last name, protests in support of defendants in the Bunkerville standoff case outside the Lloyd George U.S. Courthouse on Monday, July 17, 2017, in Las Vegas. (Bizuayehu Tesfaye/Las Vegas Review-Journal) @bizutesfaye 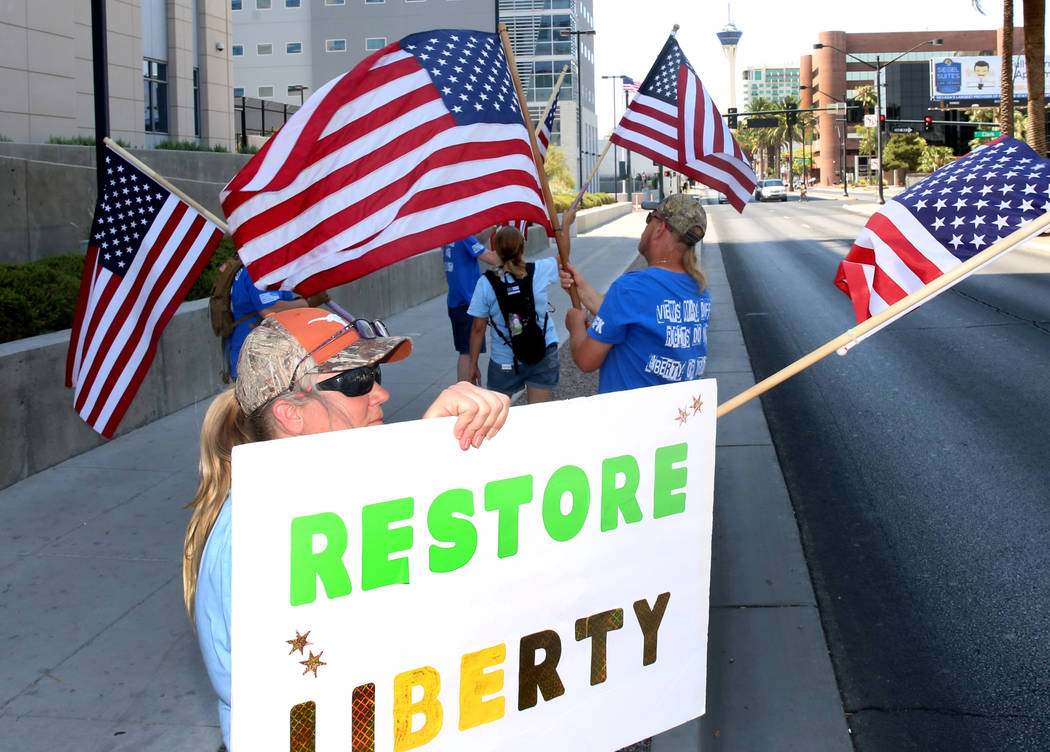 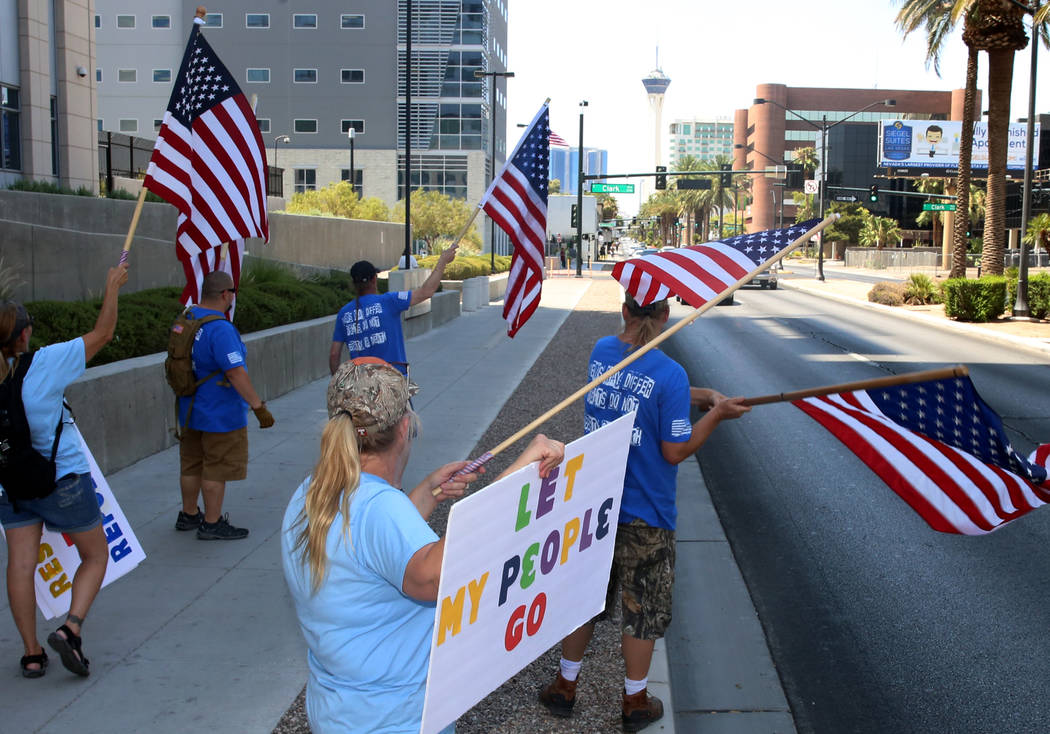 Prosecutors and defense attorneys gave opening statements Monday in the retrial against four Bunkerville standoff defendants, and presented a new batch of jurors with a question that has hung over the federal courthouse all year.

Was the 2014 armed standoff in Bunkerville the result of a coordinated assault or a mass protest?

The jury heard arguments to support both scenarios when lawyers spoke Monday in front of a packed federal courtroom in which Eric Parker, Steven Stewart, Scott Drexler and Ricky Lovelien are being retried. A mistrial was declared in April after the first jury deadlocked on all counts against those four men.

“These four defendants … got on a bridge, armed with semi-automatic rifles, and threatened to shoot law enforcement officers who stood below them in a wash,” said acting U.S. Attorney Steven Myhre, who gave the government’s opening statement.

Myhre said the four men traveled to Bunkerville to join rancher Cliven Bundy’s conspiracy to thwart the federal government’s roundup of roughly 1,000 cows from public land. The cattle impoundment operation followed a decadeslong dispute over grazing rights that pitted the recalcitrant rancher against the Bureau of Land Management. Both sides on Monday characterized the grazing dispute as peripheral to this trial.

“This case is about standing up for what you believe in. Nothing more, nothing less,” countered defense attorney Richard Tanasi, who represents Stewart. “A group of individuals protesting the U.S. government.”

The defense openings represented a condensed version of the statements they gave in February, at the onset of the first trial.

The abbreviated defense openings were the result of recent ruling that limited what defense lawyers can argue at trial. The ruling, by U.S. District Judge Gloria Navarro, bars the defense from referencing constitutional rights to freely assemble and to bear arms. It also prohibits mention of alleged misconduct or excessive force by law enforcement.

Those arguments represented the core of the defense case in the first trial, as lawyers said their clients came to Bunkerville after viewing online postings that depicted law enforcement officers using stun guns and police dogs to control angry protesters in the days that preceded the standoff.

Defense attorney Todd Leventhal, who represents Drexler, said his client “saw images that shocked his conscience, and that was the reason for coming all the way down to Bunkerville from Idaho.”

Leventhal said Drexler believes “no man is above the law, badge or not.”

Myhre, the lead prosecutor, gave a lengthy opening statement, providing a detailed timeline of the day’s events as he displayed pictures captured of each defendant during the standoff.

The defendants are charged as the “gunmen,” accused of supplying the force behind Bundy’s armed stand against the federal government. On April 12, 2014, each of them was photographed holding a gun on the highway bridge that overlooks the Toquop Wash — a sandy ditch that served as the headquarters for the cattle impoundment operation. The law enforcement officers were “on the low ground, exposed, with no natural cover or concealment,” Myhre said.

“Ask yourself whether the evidence is consistent with anything else but using threat or force to get your way,” Myhre told the jurors. He said the men used “the working end of a rifle barrel” to bend the law to their will.

Parker and Drexler both were photographed in the prone position, pointing their guns through a crack in the Jersey barrier of the highway bridge. During the government’s opening, Myhre hinted that he intends to call new law enforcement witnesses to testify that they saw the men with their weapons raised. In the first trial, defense attorneys argued to the jury that the government did not prove assault because it could not prove that any of the law enforcement officers stationed in the wash saw Drexler and Parker with their weapons raised.

“Not a shot was fired, not a bottle was thrown, not a rock was thrown,” said defense attorney Shawn Perez, who represents Lovelien. “Nobody was injured, and everyone went home.”

The men are charged with conspiracy, extortion, threats, assault, obstruction of justice and weapons counts. If convicted of all counts, they face a mandatory minimum sentence of 57 years in prison.