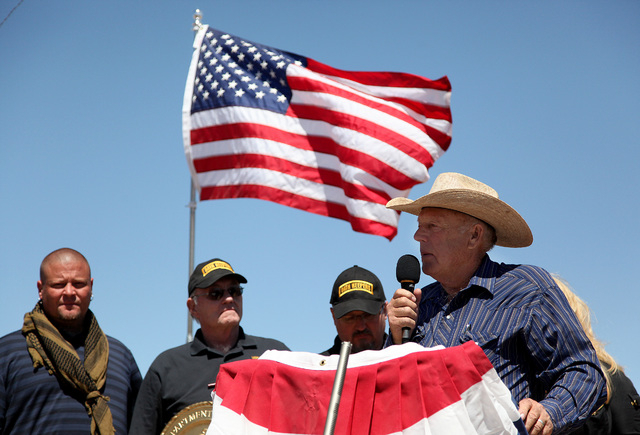 Cliven Bundy addresses a crowd of around 150 during a press conference at the protest camp near his ranch in Bunkerville on Monday, April 14, 2014. (Las Vegas Review-Journal) 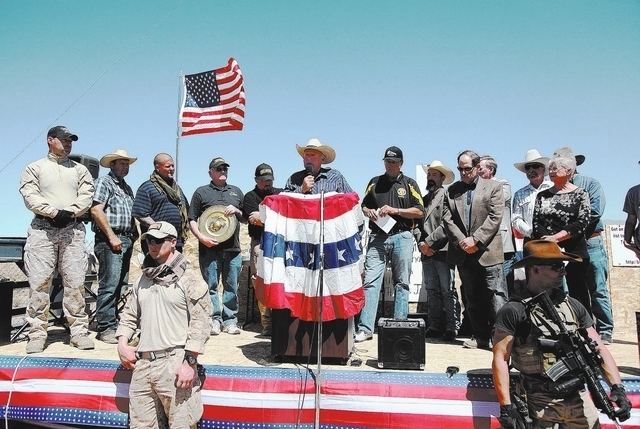 Cliven Bundy addresses a crowd of around 150 during a press conference at the protest camp near his ranch in Bunkerville on Monday, April 14, 2014. (Las Vegas Review-Journal)

The Bureau of Land Management lost the Battle of Bunkerville to Cliven Bundy and his armed militia even before it began.

Court documents charging the defiant rancher, two of his sons and others in the April 12, 2014, armed showdown near the family’s ranch show that the BLM erred by putting its rangers in a “dangerously exposed” tactical position.

The federal forces made what military tacticians consider classic mistakes in the annals of armed conflict: They gave up the high ground to the opposition while underestimating the strength of Bundy’s 200-strong force.

The BLM’s mistakes are now playing into the government’s theory in the extortion and assault case against Bundy and his sons, Ammon and Ryan, according to Kathleen Bliss, a former longtime federal prosecutor.

“Prosecutors are using this to show the conspiracy,” said Bliss, who prosecuted organized crime and domestic terrorism cases. “This wasn’t just a group that kind of showed up and got together. They definitely had a system in place, and they were organized to meet a certain goal.”

Bliss, now a defense lawyer not involved in this case, said she thinks federal agents in Bunkerville didn’t realize the magnitude of the Bundy’s organization.

“In my mind, they thought this was a bunch of hapless ranchers who had been mooching off the public for years,” she said. “When they got out there, they found that they had supporters from all over the country.”

BLM officials have declined comment, but in the criminal complaint and a 51-page indictment against the Bundys, prosecutors explain why the rangers backed down and abandoned the roundup, handing the Bundy forces a victory that emboldened what they call extremist goals in the West.

Court papers describe a relatively thin force of 50 BLM rangers left to defend temporary corrals placed in the low-lying Toquop Wash. In the pens were 400 head of cattle collected in a court-approved roundup over Bundy’s failure to pay grazing fees.

When Bundy’s supporters came to free the cattle, the rangers found themselves in a life-threatening situation as the militia exploited their errors.

“Some of these gunmen took tactically superior positions on high ground, while others moved in and out of the crowd, masking their movements behind unarmed followers,” the criminal complaint alleges. “The immediate threat to the officers came from (nearby freeway) bridges where gunmen took sniper positions behind concrete barriers, their assault rifles aimed directly at the officers below.”

Other militia members used unarmed members of the angry mob directly in front of officers in the wash as human shields to discourage them from returning fire.

“The officers at the (corral) gate were dangerously exposed,” the complaint adds. “They were in the open and low ground at the bottom of the wash, below highway bridges that towered more than 40 feet above them and surrounded on the sides by steep embankments of high ground.

“The terrain acted like a funnel with them at the bottom and no natural cover or concealment to protect them from the gunmen on the high ground, their only protection being their body armor and the vehicles they happened to drive to the gate.”

The officers could “readily observe” the snipers “bobbing up and down,” measuring them as targets. Others in the boisterous crowd refused commands to leave, taunted officers and brandished weapons.

Having the upper hand, the militia forces demanded the rangers release the cattle and threatened to take the animals by force if necessary, the complaint says.

“Outnumbered by more than 4 to 1, unwilling to risk harm to children and other unarmed bystanders who had accompanied the followers and wishing to avoid a firefight that was sure to follow if they engaged the snipers on the bridge, the officers had no choice and were forced to leave and abandon the cattle to Bundy and his co-conspirators … ,” the complaint states.

Following two hours of negotiations, the federal rangers packed up their bags and took off, ending the Battle of Bunkerville without a shot fired or a drop of blood spilled — but not without consequences.

To this day, some of the federal officers, including some who had served in the military, remain shell-shocked by the encounter, the documents say.

And the Bundy victory that day may well have emboldened activists who oppose federal control of public land in the West.

On Jan. 2, two-dozen activists, including Ammon and Ryan Bundy, occupied the Malheur National Wildlife Refuge headquarters in Harney County, Oregon, in part to protest 5-year prison sentences for two local ranchers who burned brush on federal land. Unlike the Battle of Bunkerville, the 41-day standoff ended two weeks after Arizona rancher Robert “LaVoy” Finicum was shot and killed by Oregon state troopers at a roadblock. The two Bundys were arrested nearby.

Earlier this month FBI agents arrested Cliven Bundy at Portland International Airport after he stepped off a plane on his way to support holdouts in Eastern Oregon.

All three Bundys are being held without bail in Portland, and the elder Bundy has been ordered transported to Las Vegas to face 16 felony charges, including extortion, obstruction of justice and conspiracy to impede or injure a federal officer.