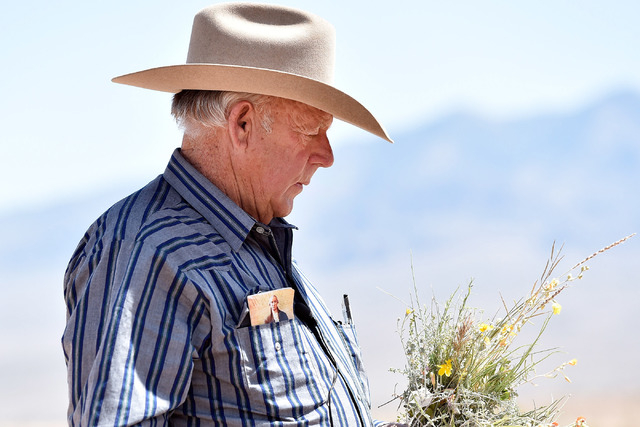 Federal prosecutors say a new death threat against one of their own is playing into their efforts to withhold evidence from the public in the April 2014 Bunkerville standoff case.

In court papers over the weekend, prosecutors said the Facebook threat “appears to call for a lone wolf” attack on the prosecutor, and they cited the June 2014 slaying of two Las Vegas police officers by Bundy followers Jerad and Amanda Miller as an example of how a such a threat can turn deadly.

Prosecutors argued that the Las Vegas Review-Journal and other news organizations have no standing in court to oppose their request for a protective order to maintain the confidentiality of the evidence.

The Review-Journal, Battle Born Media and The Associated Press have filed court papers seeking to intervene and lodge objections to the government’s push for secrecy in the high-profile case.

“If hostile statements on social media are grounds for the government to shove public business behind closed doors, then democracy is in deep trouble,” said Review-Journal Editor Keith Moyer. “Irrational fear paves a path to secrecy and the loss of accountability.”

Attorney Maggie McLetchie, who represents all three news organizations, described the government’s argument as “essentially all smoke and mirrors and an effort to distract from the fact that it has the burden of establishing the need for total secrecy.”

The Review-Journal is Nevada’s largest daily newspaper, and Battle Born Media publishes weekly rural newspapers, including one in Mesquite, which is near the Bundy ranch. The AP is a worldwide news organization that provides stories to 15,000 media outlets.

Prosecutors have asked a federal judge to keep secret the majority of the evidence they turn over to defense lawyers to protect witnesses and investigators that prosecutors argue could be subjected to threats from Bundy family followers.

The death threat against the prosecutor was made May 10 after a judge refused to free Peter Santilli, one of the 19 defendants in the Bunkerville standoff case, prosecutors wrote. The Facebook post stated, “Remember the name (of the government attorney) … it will be a joy to see this treasonous Nazi hang or burn for treason … or to read about the lone wolf attack that put this rabid dog down for a dirt nap.”

Prosecutors cited in their court papers instances of “violence and threats carried out by lone wolf followers” of the Bundys.

They recalled how Jerad and Amanda Miller were at the Bundy ranch before and after the April 12, 2014, armed confrontation near Bunkerville, and how Jerad Miller made numerous Facebook posts supporting the Bundys after the standoff.

Earlier this month, U.S. Magistrate Judge Peggy Leen issued a temporary order to keep the government’s evidence under wraps while she decides whether to let the media intervene and oppose a permanent protective order.

In their court papers, prosecutors argued that allowing the news organizations to intervene would set a bad precedent for the courts.

“The proposed intervenors ask this court to go where other courts have feared to tread — to confer third-party standing in every criminal case where the government seeks to limit dissemination of discovery information,” the prosecutors said.

But McLetchie said the government took the opposite approach in the long-running investigation into the scheme to take over and defraud homeowners associations. In that case, prosecutors did not oppose allowing the Review-Journal to intervene to seek court-protected evidence, McLetchie said.

In their latest court papers, prosecutors also derided the news organizations’ argument that the government has failed to establish good cause to withhold the mass of evidence from the public.

They called the arguments “baseless characterizations” and said “to a great extent they merely incant the same conclusionary (and legally wrong) statements made by the defendants” in the standoff case.

Lawyers for most of the 19 defendants charged in the Bunkerville confrontation— including rancher Cliven Bundy and four of his sons — also have filed court papers opposing the government’s proposed protective order.

“The government cannot simply rely on the fact that some people that hold anti-government views have committed atrocious acts,” McLetchie said. “It needs to establish good cause for keeping discovery under lock and key.

“While protecting witness safety, the court should grant the public and the media as much access as possible to evaluate, for example, whether the government is properly drawing the line between protected speech and true threats – or if it is attempting to punish critics.”