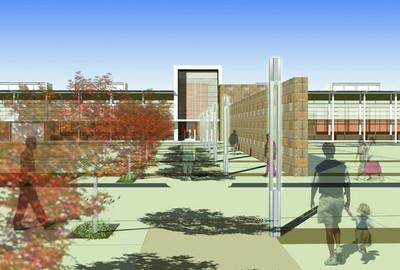 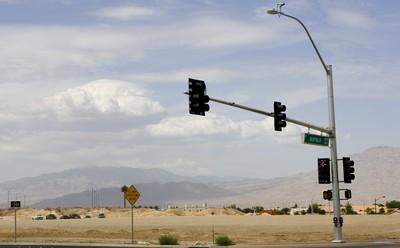 When the Centennial Hills Library opens in January 2009, it will become the cornerstone of the center of the fast-growing northwest community.

Ground was broken in July for the library, on a seven-acre site where Buffalo Drive and Deer Springs Way intersect.

"It’s going to be great, like a one-stop shop. There’s going to be one place to go for everything," Centennial Hills resident Terri Rodriguez said.

Near the library site will be a fire station, police station not yet built, and the new Centennial Hills Community Center that opened July 28.

The center features indoor and outdoor swimming pools, YMCA facilities, two gymnasiums, a senior center, and space for a variety of multigenerational activities.

To the west of the library will be the Centennial Hills Park, which also is under construction.

"It’s really going to enhance the entire community for the neighborhoods growing up around the park," said Michael Crowe, library project manager for JMA Architecture Studio. The location will give the library a stately, civic look, he said.

"This is an opportunity for us to bring a broader array of services to an area of the valley that currently doesn’t have reasonable access at all," said Daniel Walters, executive director of the Las Vegas-Clark County Library District.

"In Las Vegas, kids don’t ride their bikes miles down the road to get to the local library. It’s too hot. There needs to be something close," Walters said. "The people in Centennial have been paying for library use with their taxes, so I’m excited to bring that to them."

The building will include a reading lounge with outdoor seating overlooking the park, wireless Internet, a bookstore cafe, separate computer areas for adults and young people, both which can double as classrooms, and a children’s room.

With plenty of windows in the library, customers will be able to view the outdoors from 90 percent of the normally occupied space, Crowe said. "The library is basically transparent. It’s a gateway to the outside."

The $18.1 million project became a reality when the Henderson Public Library District modified its boundaries to encompass the county’s Green Valley Library. The two libraries will change hands in January 2009, freeing materials and staff to assist with the Centennial project, Walters said.

The Centennial Hills Library will serve as the technical hub for the entire city-county library district, expediting book check-in and checkout at all 12 urban branches.

Instead of bar codes, library officials plan to use microchips to scan loaned materials. The district has about 2.46 million items in its collection, district spokeswoman Patricia Marvel said.

The new system will use microchips and radio frequency identification to check books in and out, streamlining the circulation process, Walters said.

Returned materials will automatically go on a conveyer belt where a scanner reads the microchip, allowing library computers to immediately record that an item has been returned, he said.

The scanner is so sensitive it can read multiple chips at once. With bar codes, the materials have to be scanned one at a time by hand.

Renovations to the circulation areas at all the district’s libraries will be done in phases starting with the West Las Vegas Library in September.

In addition to the 32,431-square-foot public space in the new building, the Centennial Hills Library will have a 13,124-square-foot operations center to machine-sort books.

All materials that have been returned to any district branch will be brought to the Centennial branch to be sorted. From there they will be delivered to the home library.

Some 70,000 items a month are returned to the wrong library branch, Walters said.

Between scanning bar codes, hand sorting and transportation, the current check-in and checkout system sometimes can take 10 days for an item to reach the consumer. The new system should make it much faster, he said.

Upgrading technology wasn’t the only thing on library planners’ minds when they dreamed up ways to spend the nearly $20 million saved with the library district’s capital project fund.

Library officials and planners at JMA and Rafael Construction created a building that will exceed the U.S. Green Building Council standards. They are seeking silver Leadership in Energy and Environmental Design, or LEED, certification.

Being energy efficient is especially important in the desert where buildings have to be cooled year round, Crowe said.

Walters said the extra 45 percent in construction costs and design fees to make the library resource efficient and environmentally friendly is worth it. The payback period is projected to be six years, with an energy savings of 30 percent over the life of the building.