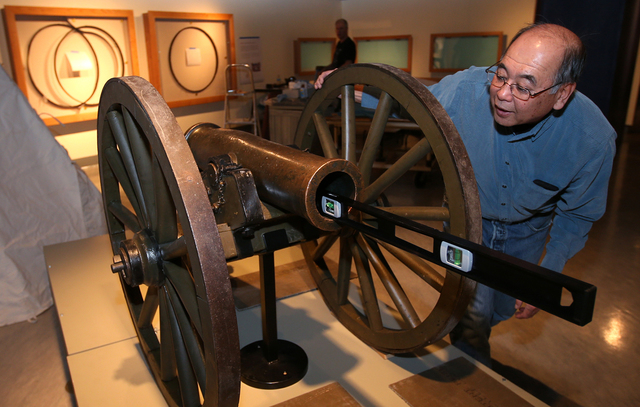 Nevada State Museum Archaeologist Gene Hattori checks a level while setting up the Fremont Cannon as part of the "Finding Fremont: Pathfinder of the West" exhibit at the museum in Carson City, Nev., on Monday, Jan. 27, 2014. (Las Vegas Review-Journal/Cathleen Allison) 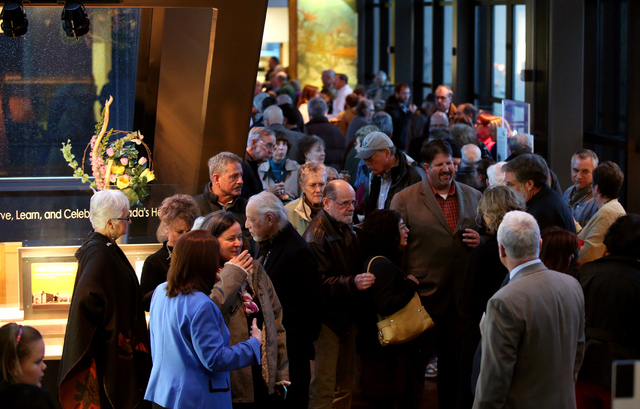 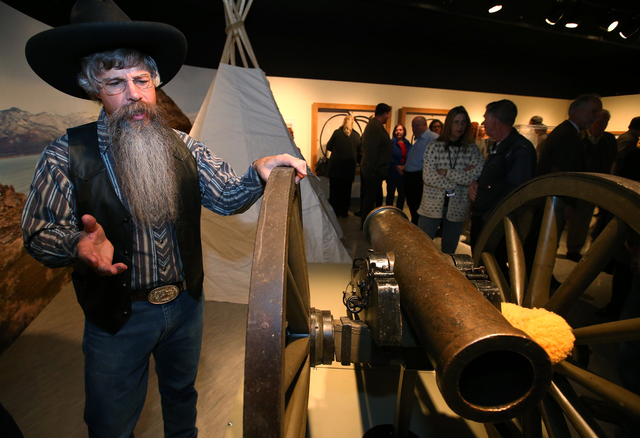 Tony Argento talks about the Fremont Cannon at the "Finding Fremont: Pathfinder of the West" exhibit at the Nevada State Museum, in Carson City, Nev., on Wednesday, Jan. 29, 2014. (Las Vegas Review-Journal/Cathleen Allison) 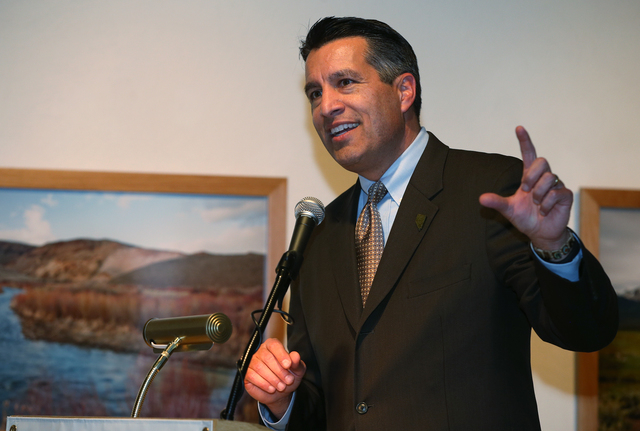 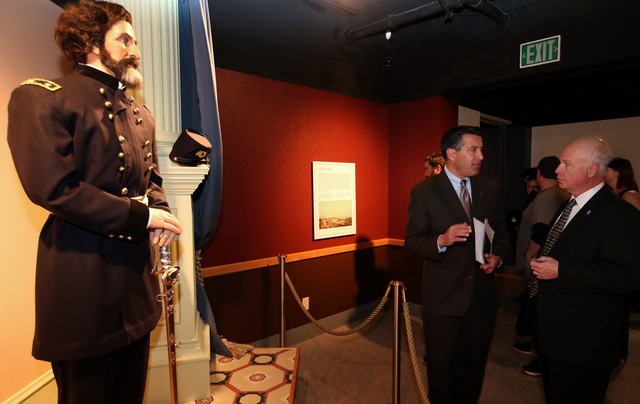 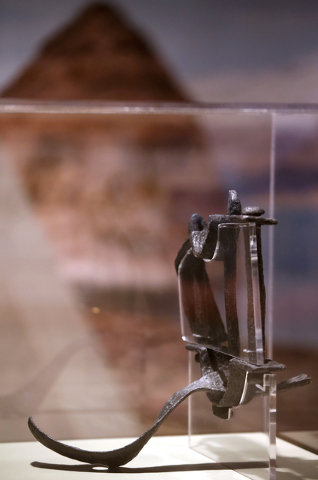 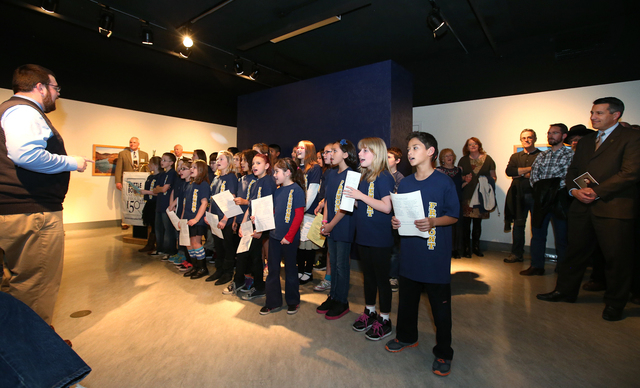 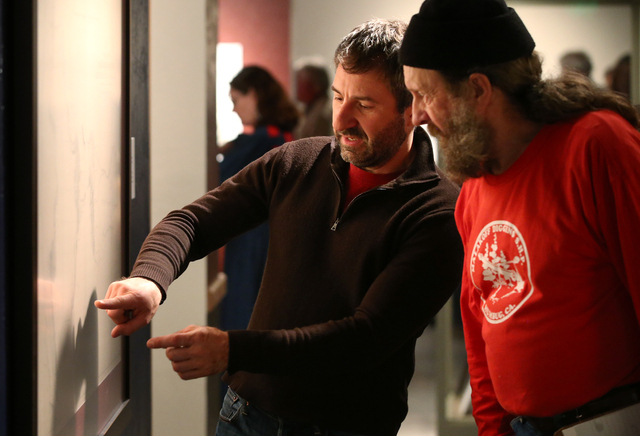 Anthony Edwards, left, and Joel Tracy look at a map during the grand opening event for the "Finding Fremont: Pathfinder of the West" exhibit at the Nevada State Museum, in Carson City, Nev., on Wednesday, Jan. 29, 2014. Tracy is a member of the Fremont Howitzer Recovery Team. (Las Vegas Review-Journal/Cathleen Allison) 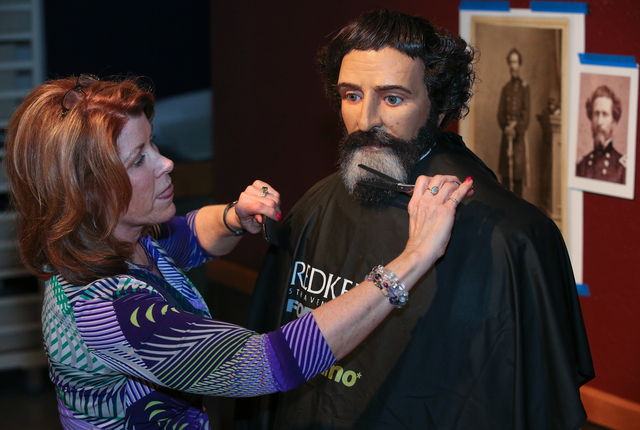 But rather than a failure, he was treated as one of Nevada’s greatest heroes by the 441 people who viewed artifacts of his ill-fated expedition at the Nevada State Museum in the capital city on Wednesday night.

“He was the trailblazer,” said state archaeologist Gene Hattori. “His maps and journals were of tremendous benefit to emigrants. This was Mexico and his works were used to encourage the settlement of the West.”

“He had a huge impact on the state of Nevada,” added Gov. Brian Sandoval, reciting the Humboldt River, Pyramid Lake, the Carson River and other places Fremont named. Sandoval later told the crowd that he bids on eBay for Nevada artifacts, but passed up recently on bidding $7,500 for a Fremont signature.

As part of the state’s 150th birthday celebration, the museum opened its “Finding Fremont: Pathfinder of the West” exhibit that will run through Nevada Day on Oct. 31. Then the exhibit will move to the Deschutes County Historical Society museum in Bend, Ore., another place where Fremont stopped on his 1843-44 expedition.

Much of the Fremont material in the Nevada museum exhibit was loaned by the historical society. Kelly Cannon-Miller, executive director of the Deschutes historical society, said there is a good chance that eventually the exhibit will be displayed in Las Vegas.

Fremont (1813-90) typically ignored orders from his superiors in Washington, D.C, and traveled where he chose, or where his father-in-law and benefactor — U.S. Sen. Thomas Hart Benton of Missouri — wanted him to go. He was not supposed to be traipsing around the unknown land that became Nevada.

Benton was a primary architect of the “manifest destiny” philosophy that America should stretch from the Atlantic to the Pacific. Fremont captured Santa Barbara and Los Angeles in December 1846 from the Mexican Army and became military governor and eventually the first U.S. senator from California.

His map from his Nevada journey included an oasis called “Vegas” where his 25-member expedition had rested and recuperated. Congress ordered the printing of 20,000 of these maps in 1848, in part because it showed the trail along the Humboldt River where wagon trains could travel on their way to “El Dorado,” the goldfields near Placerville, Calif.

The highlight of the pathfinder exhibit was the display of the Fremont cannon, or what some people think is the Fremont cannon that the explorer dumped in a riverbed about 20 miles outside of Bridgeport, Calif.

And for the first time, the museum also displayed three iron wheels and axle pieces that were found in 1997 and 2004 by the Fremont Howitzer Recovery Team where in his journals Fremont said he dumped the cannon.

Fremont had addressed his expedition of “Americans, French, Germans, Canadians, Indians and colored” on that Jan. 29, 1844, explaining how they could not survive if they tried to haul the cannon in the middle of the winter over the 90 miles of mountains into the Sacramento Valley.

That he would mention “colored”or African-Americans is not surprising. Born and raised in the South, the illegitimate Fremont was a strong opponent of slavery. As the Union general over the West during the first year of the Civil War, Fremont freed the slaves in Missouri.

But President Abraham Lincoln, trying still for a political agreement with the Confederacy, rescinded Fremont’s Emancipation Proclamation and relieved him of his command.

Fortunately for Lincoln, Fremont had named a little known and often drunken West Point graduate named Ulysses S. Grant as one of his generals.

Fremont also had been the first candidate in 1856 of the anti-slavery Republican Party.

There is little doubt that the wheels and the axle parts displayed in the museum came off the genuine Fremont cannon, but the authenticity of the 223-pound cannon barrel donated to the museum generations ago remains in doubt.

Sandoval has no doubt about the authenticity of the cannon.

“I believe it is because Fremont authenticated it in Virginia City,” said Sandoval, aware that Fremont in 1881 visited a fire department in Virginia City and claimed its cannon was the one he abandoned.

That cannon later would be fired on July 4 celebrations at Lake Tahoe and eventually donated to the Nevada State Museum. But doubt remained for many and searches for the “lost” Fremont cannon continue.

Guy Rocha, the former state archivist, said the museum’s Fremont cannon is not the real one.

He points to a drawing made by Charles Preuss, the expedition’s cartographer, at Pyramid Lake, a few weeks before they reached the Sierra Nevada. The cannon in the drawing, on display in the exhibit, shows handles that are absent from the museum cannon.

“I would like to say it is (real) and if it is it is the holy grail,” added Tony Argento, a member of the Fremont Howitzer Recovery Team and a cowboy poet in Reno.

“Maybe,” responded Bil Cossitt, another member of the team.

Cossitt said Preuss may have made just a rough sketch at Pyramid Lake and later embellished his cannon drawing when the expedition ended. Their experts do not believe any mountain howitzers of the era had handles or “dolphins.”

But he said it is clear the cannon was one of 12 French-style mountain howitzers made by a Boston company in 1836. There is speculation a 13th cannon, the model for the rest, may have been manufactured. That one might be the real Fremont cannon.

So why are they still looking for it?

Cossitt, a federal attorney in Reno, answered by slapping the the barrel of the museum’s Fremont cannon.