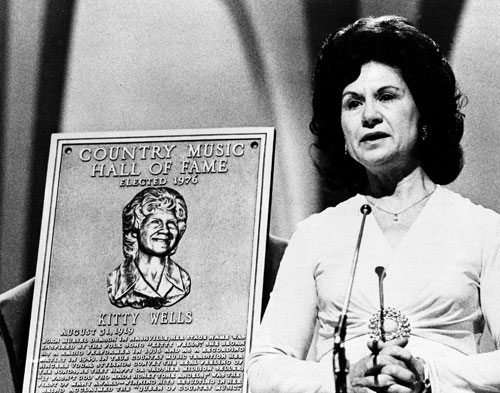 NASHVILLE, Tenn. – Singer Kitty Wells, whose hits such as "Making Believe" and "It Wasn’t God Who Made Honky Tonk Angels" made her the first female superstar of country music, died Monday. She was 92.

The singer’s family said she died peacefully at home after complications from a stroke.

Her solo recording career lasted from 1952 to the late 1970s and she made concert tours from the late 1930s until 2000. That year, she announced she was quitting the road, although she performed occasionally in Nashville and elsewhere afterward.

Her "It Wasn’t God Who Made Honky Tonk Angels" in 1952 was the first No. 1 hit by a woman soloist on the country music charts and dashed the notion that women couldn’t be headliners. Billboard magazine had been charting country singles for about eight years at that time.

She recorded approximately 50 albums, had 25 Top 10 country hits and went around the world several times. From 1953 to 1968, various polls listed Wells as the No. 1 female country singer. Tammy Wynette finally dethroned her.

Her 1955 hit "Making Believe" was on the movie soundtrack of "Mississippi Burning" that was released 33 years later. Among her other hits were "The Things I Might Have Been," "Release Me," "Amigo’s Guitar," "Heartbreak USA," "Left to Right" and a version of "I Can’t Stop Loving You."

In 1989, Wells collaborated with Brenda Lee, Loretta Lynn and k.d. lang on the record "The Honky Tonk Angels Medley."

"I never really thought about being a pioneer," she said in an Associated Press interview in 2008. "I loved doing what I was doing."

Her songs tended to treasure devotion and home life, with titles like "Searching (For Someone Like You)" and "Three Ways (To Love You)." But her "It Wasn’t God Who Made Honky Tonk Angels" gave the woman’s point of view about the wild side of life.

The song was written by J.D. Miller as a retort to Hank Thompson’s 1952 hit, "The Wild Side of Life."

The chorus to Thompson’s record was:

"I might have known you’d never make a wife –

"But you gave up the only one that ever loved you

"And went back to the wild side of life."

In his response, Miller wrote:

"It wasn’t God who made honky-tonk angels,

"As you said in the words of your song,

"That has caused many a good girl to go wrong.

The song opened the way for women to present their view of life and love in country music. It also encouraged Nashville songwriters to begin writing from a woman’s perspective.

The song was controversial enough that the Grand Ole Opry asked Wells not to perform it, and some radio stations were reluctant to play it.

"They get away with a lot more today," Wells told the AP in 1986. "They’re more (sexually) suggestive today."

In 2008, the Library of Congress announced that Wells’ record had been added to its National Recording Registry of works of unusual historic merit.

Also that year, the Country Music Hall of Fame and Museum honored her with an exhibit about her career.

She was known as a gracious, elegant and family-oriented person.

"What I’ve done has been satisfying," she said in the 1986 AP interview. "I wouldn’t change a thing."

About her many years of touring, she said, "I like going to different places and seeing the scenery and meeting the people. I’ve always enjoyed traveling. It’s as good a way as any to spend your time."

She was born Ellen Muriel Deason in Nashville, the daughter of a railroad brakeman.

She began playing the guitar at age 14 and soon was performing at dances in the Nashville area.

Wells married Johnny Wright, half of a duo called Johnny and Jack, in 1938 when she was not yet 20, and soon began touring with the duo. She took her stage name from an old folk song, "Sweet Kitty Wells." Johnny Wright died Sept. 27, 2011.

By the late ’40s, they were appearing on the Grand Ole Opry. He performed with her throughout her career and their long marriage.

Son Bobby Wright, one of her three children, played a countrified sailor on the TV show "McHale’s Navy" from 1962 to 1966.