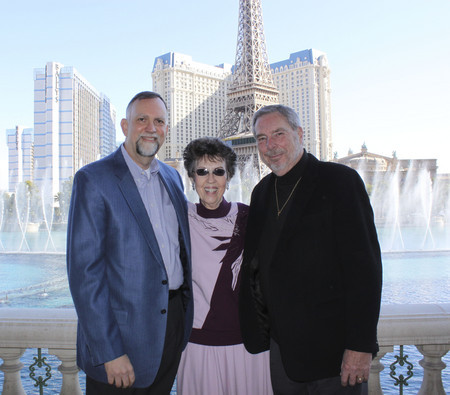 Elvis Presley‘s notorious gunplay didn’t just involve shooting TVs in the privacy of his home. He was involved in a couple of jaw-dropping public incidents that left his security all shook up.

The scariest one occurred in 1977 in front of law enforcement.

Elvis’ bodyguards Sam Thompson and Dick Grob recalled the incident Sunday during lunch at Jasmine restaurant at Bellagio before attending a panel discussion in front of visiting writers in the hotel’s Fontana Room.

Elvis’ private jet, the Lisa Marie, had just landed after a Rochester-to-Binghamton, N.Y. flight. Grob, the chief of security, had just warned Elvis that they were in a restricted gun-carry area.

It was about 3 a.m. May 26, and a crowd of fans and dignitaries, including Elvis’ manager, Col. Tom Parker, and a high-ranking law officer, had gathered to welcome Presley.

As he lifted his arms to acknowledge the reception, two loaded semiautomatic Colt pistols fell from his waistband and bounced down the steps.

"Elvis had a sheepish grin as he came down," said Thompson, now chairman of the Public Utilities Commission of Nevada.

Presley "completely disarmed the man by shaking his hand and introducing himself," Thompson said. "The guy handed him the guns and said, ‘I believe these are yours Mr. Presley.’ Elvis stuck ’em back in his waistband." The guns are on display at Graceland, Thompson said.

At another concert, around the same time, a loaded .22-caliber derringer popped out of one of Elvis’ stage boots and bounced on the stage right in front of rhythm guitarist John Wilkinson, "who did not like guns," Thompson said.

It was retrieved about 20 minutes later, Thompson said.

He and Grob, with Parker’s widow, Loanne, and Armand Thomas, creative director of Cirque du Soleil’s "Viva Elvis" show at CityCenter, were part of a panel discussion for writers in town to see the show Friday on Elvis’ 75th birthday.

"Good news for Gilbert Arenas. He got ‘Athlete of the Year’ from Guns & Ammo magazine." — Jay Leno