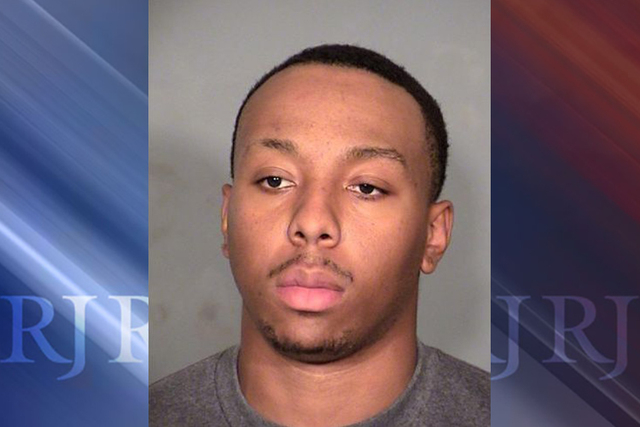 A man who fatally stabbed a panhandler known as the “pantyhose prankster” on the Strip last month was defending himself against an attack, his friend told a judge Tuesday.

But prosecutors said the story Derick Flores gave to police after the Nov. 25 encounter just outside Planet Hollywood was different from his testimony during a preliminary hearing for Calvin Boyden III, who faces charges of murder and robbery in the death of Rip Alan Swartz.

Flores never told police that Swartz swung at Boyden because investigators never asked who started the scuffle and Flores was not given a chance to elaborate on the details of the encounter, he said.

Swartz, who was homeless, was found on a pedestrian bridge on Harmon Avenue about 12:40 a.m. Nov. 25 with a stab wound to the chest, Las Vegas police said. He died at University Medical Center.

Swartz, 46, had been sentenced to prison in Pennsylvania for making random calls to banks, restaurants and other numbers he found in the phone book, according to published reports. The Harrisburg Patriot-News reported Swartz told police that asking women about their pantyhose was how he “got his jollies.”

Flores said he and Boyden went to the Strip around 10:30 p.m. Nov. 24. A woman told Boyden he was cute, he stopped and said thank you.

Then Swartz, who was sitting with a sign offering bad advice for cash, shouted “a racial slur”at Boyden, Flores said.

A woman who had been sitting next to Swartz on the bridge when Boyden approached was unable to testify because she was hospitalized Tuesday morning, according to prosecutor Michael Schwartzer.

Authorities believe Boyden turned back and grabbed Swartz’s tip jar. At some point, Swartz “swung up” and hit Boyden in the face,” Flores said. The two became entangled, before Swartz yelled “oh, he stabbed me,” according to Flores.

“And he fell straight to the ground, holding his side,” Flores said.

A surveillance video captured the quarrel, but prosecutors did not play it during Tuesday’s hearing.

Flores and Boyden ran from the scene after the stabbing.

Flores said he’s known Boyden for about two-and-a-half years and had never seen Boyden do anything violent.

“He (Boyden) couldn’t believe he actually did it,” Flores said.

They made it as far as Bally’s, where an officer asked them to stop. Flores did, but Boyden continued to run.

A security guard at Cromwell said he saw Boyden drop a knife as he fled. He was eventually arrested near the valet area of Caesars.

Las Vegas Justice of the Peace Janiece Marshall should throw out the murder charge against Boyden if she decides he acted in self defense, defense attorney Norm Reed said.

“The state’s own witness clearly identified the decedent as the initial aggressor,” Reed said. “He was the one who precipitated the fight verbally and physically.”

But Schwartzer said that Boyden pulled out a knife was “an imperfect self defense” and a jury should make the decision. He said the judge should only decide on whether there was probable cause for the murder charge.

Marshall is expected to hear further argument on the murder charge next week.