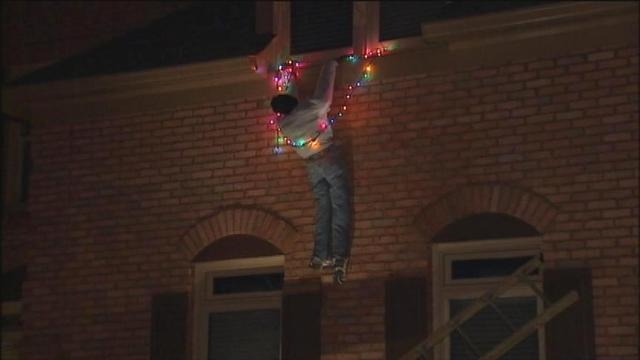 This frame grab from video provided by WSB-TV Atlanta shows an Atlanta homeowner's Christmas decoration of a mannequin with outstretched arms entangled in a string of Christmas lights and clinging to a ledge. The decoration prompted an emergency response to his house. (AP Photo/WSB-TV Atlanta)

BERKELEY LAKE, Ga. — A metro Atlanta homeowner says he hopes he didn’t offend anyone by his Christmas decoration of a mannequin with outstretched arms entangled in a string of Christmas lights and clinging to a ledge that prompted an emergency response to his house.

Bubba Murphy Lake told WSB-TV that someone passing the house in Berkeley Lake with their children thought the display looked so realistic that they called 911. He says fire officials told him to take the display down — at least temporarily. The display also had a ladder toppled over in the front yard.

Murphy says homeowners in his Cobb County neighborhood go all out with their Christmas displays every year.

Berkeley Lake is about 22 miles northeast of downtown Atlanta.