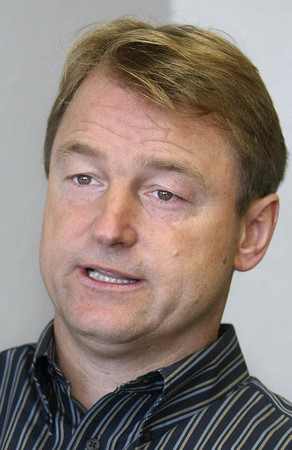 The market for “Give ’em Heller” bumper stickers just took a serious nosedive.

Rep. Dean Heller, R-Nev., said he won’t jump into what’s shaping up to be one of the state’s highest-profile political races — a challenge to U.S. Senate Majority Leader Harry Reid, D-Nev.

Republican officials said Heller notified National Republican Senatorial Committee Chairman John Cornyn, R-Texas, by phone that he intends to seek another term in the U.S. House of Representatives, where he holds a relatively safe seat and is rising in stature.

Heller also told a Reno newspaper, “I’m happy where I am.”

The decision to eschew a Reid challenge saves Heller from the rigors of what undoubtedly would have been a costly, brutal campaign and creates an opening for other Republican hopefuls to play David to Reid’s Goliath.

“A wide open primary is what the Republican party needs,” said Nevada conservative activist Chuck Muth, who had just made the first deposit into the bank account for his Dump Reid PAC, in the amount of $81.71.

Muth said Reid, who intends to raise as much as $25 million for his campaign, is about the only issue on which Nevada Republicans can agree.

“The party needs to have it out and have a fight and decide who their nominee is going to be,” Muth said. “Harry Reid is potentially the glue that could pull that disparate party together.”

In a written statement, Reid acknowledged Heller’s decision, but didn’t touch on other potential contenders.

“Dean Heller has served Nevada well in his years of public service as secretary of state and in Congress,” Reid wrote. “As a member of the powerful Ways and Means Committee, he is and will continue to be in an important position for Nevada. Our families have been friends for many years, and regardless of his decision, that wouldn’t have changed.”

At the top of the evolving list of potential contenders is Nevada Republican Party Chairwoman Sue Lowden, who recently commissioned a poll to gauge her chances against Reid. The poll, taken July 29-30, showed 48 percent of likely voters preferred Lowden and 42 percent favored Reid.

State Sen. Mark Amodei, R-Carson City, has also been mentioned as a possible challenger. Amodei did not return a call for comment.

Robert Uithoven, a longtime Republican strategist and Lowden supporter, says the poll to analyze Lowden’s chances in some ways says more about Reid’s weaknesses than her strengths.

Only 34 percent of respondents said Reid should be re-elected, which Uithoven says suggests Nevadans have soured on Reid since he became majority leader.

“There is a very strong and growing disconnect between Nevadans and Sen. Reid,” he said.

That disconnect, however, is not likely to be enough to derail Reid no matter what the polls say now, said Eric Herzik, a political science professor at the University of Nevada, Reno.

And with Heller out, Herzik says none of the announced or potential Republican candidates have the juice to sustain a campaign against Reid.

“There is no top-drawer candidate to take on Harry Reid,” Herzik said.

He said Heller was the only candidate with a staff in place, name recognition and serious fundraising ability.

If Lowden is the next in line after Heller, Herzik says Reid will win another term.

“That would just be an incredible longshot,” he said. “The last time she ran for election was more than a decade ago and she lost.”

Reid has shown an ability not only to raise money but also to get support from political leaders of both parties.

The list of prominent GOP supporters for Reid means the challenger will need to work that much harder to win voters outside established channels.

Herzik says he can’t think of a Nevada Republican willing to run who has the credibility to win a campaign when one of the most powerful political positions in America is at stake.

“The U.S. Senate is kind of at the top of the food chain. The number of credible candidates is actually pretty small,” Herzik said. “The closer it gets to 2010 (Reid’s) chances are looking better as the Republicans really don’t have a candidate who will just rally Nevadans.”