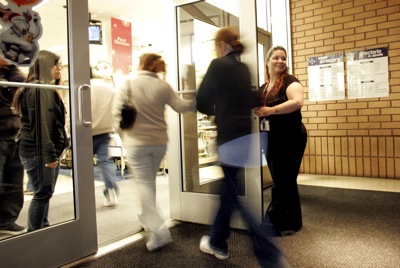 After 32 hours camped in front of an electronics store, Russ Mayfield of Las Vegas personified the state of America’s consumer economy: disheveled and dead on his feet, yet determined to trudge headlong into another holiday shopping season.

“It has been two long nights, but it is well worth it,” said Mayfield, 54, who was first among hundreds of people lined up Friday morning at Best Buy in the Best in the West shopping center.

Mayfield staked out the spot Wednesday at 9 p.m. He was there to buy his grandchildren laptop computers from a limited supply marked down from $849 to $349 for early morning customers.

“Without the doorbuster price on these laptops I couldn’t afford to do it,” said Mayfield, a former water district maintenance worker now on disability.

April Pruett, 30, and Amanda Murphy, 19, both of Las Vegas, were among hundreds who swarmed JC Penney at Meadows Mall shortly after the store opened at 4 a.m. The duo had been shopping for several hours, having already hit local outlet malls that opened at midnight. “I taught her Black Friday,” Pruett said, as the two started out heading for the shoe department but stopped in women’s clothes.

They weren’t hunting for anything in particular, instead simply prowling for deals.

“Last year was all electronics,” said Pruett, a casino worker. “This year is whatever we see.”

Throughout Las Vegas — and around the country — the scene was the same.

The Black Friday tradition goes back decades and gets its name from the end-of-year buying sprees retailers hope will push their balance sheets into the black.

It remains to be seen if retailers’ holiday wishes will come true this year.

The outcome is especially crucial to Las Vegas, where retail growth has outpaced even casino gambling during the past 10 years.

Meanwhile taxable gambling revenue grew from $7.3 billion to $12.2 billion, an increase of 67 percent.

Like the overall rate of tourist visits, however, the Nevada retail juggernaut has slowed from a sprint to a crawl.

In addition to high unemployment, a credit shortage and other daunting economic factors, the 2008 holiday shopping season is five days shorter than last year and there isn’t a single, must-have gift that’s captured the public imagination.

“No (video) game system came out this year, there isn’t that trendy item,” said MaryEtta Weasa, general manager of Sears at Meadows Mall.

Weasa threw open the doors at 5 a.m. for about 560 customers who surged into the department store to take advantage of specials, like a Sharp, 46-inch, high resolution television for $899.

“Hopefully, I’m going to get it because I was first in line, said Steve Soriano, 39, of Calabasas, Calif.

Whatever boost stores received today will be comparable to the boost early morning shoppers got from steaming coffee or oversized energy drinks — frenzied, but ultimately unsatisfying.

“It is not going to be much of an impact at all,” Davidowitz said.

That’s because shoppers will only pry open their wallets if they think they’re getting a steep discount, forcing retailers into a cost-cutting competition that will serve to squeeze margins even further.

He says consumers are “in massive trade-down mode,” which means strong value retailers such as Walmart are holding steady while department stores, luxury shops and other stodgy retailers lose market share.

“It is washing out lots of bad (retailers) who are liquidating,” he said of bankrupt or troubled companies such as Mervyns, Linens n’ Things and Circuit City. Kathy Grannis, spokeswoman for the National Retail Federation, said bargain-hunting has been a theme of her group’s surveys since October.

According to surveys by the federation, 70 percent of shoppers plan to eschew higher cost stores in favor of discount chains, a 2 percent increase from 2007.

“It is something we’ve seen for the last couple months, consumers trading down,” Grannis said. “Price matters the absolute most to consumers.”

Wendy Cudaback of Las Vegas was among shoppers who made it to Meadows Mall hours before sunrise.

When asked where she typically does her holiday shopping Cudaback, who works in a race and sports book on the Strip, said, “Dillard’s.”

Then she finished her cigarette before rushing back into the scrum at JC Penney, “But that is out of the question this year, my tips are gone.”