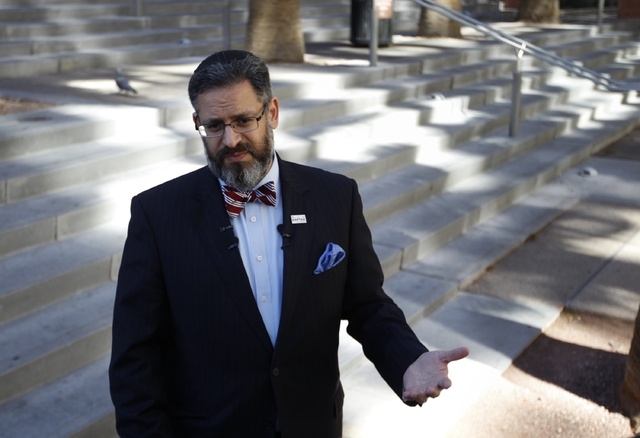 As the Review-Journal reported Thursday, Hafter’s malodorous froth came via Facebook after Vega declined to reschedule a court proceeding around a Jewish holiday.

Hafter, an Orthodox Jew, didn’t blame himself for not informing the court months ago of a possible scheduling conflict. Someone should buy the guy a calendar.

Vega, who is retiring at the end of her term, is married to longtime Review-Journal reporter Howard Stutz, who is Jewish and a friend of 30 years.

Hafter is running for a seat on the District Court bench. It’s hard to imagine a reasonable person voting for him.

But here’s a campaign slogan you don’t often see: “Vote Hafter: Judgment so suspect, even his mother doesn’t endorse him.”

It’s true. She doesn’t. In fact, she calls him “delusional.”

GAMING’S GENTLEMAN: Robert Faiss, who died Wednesday after a long medical battle, will rightly be remembered as one of Nevada’s best gaming attorneys. Bob possessed a fine legal mind, but he was an even better man.

LIGHT SUIT: Looks like someone is making it rain subpoenas in the increasingly heated sexual harassment lawsuit against the operators of the popular Light Group nightclubs on the Strip.

With much at stake, it will be intriguing to learn what witnesses are being called for deposition and what they have to say about the atmosphere of the place.

POLITICAL VOICES: Some Nevada voters couldn’t be blamed if they were being courted to apply for a reverse mortgage or listening to an episode of “Law & Order” this week when they picked up the phone and heard Fred Thompson’s mellow double baritone extolling the virtues of lieutenant governor candidate Sue Lowden.

Lowden also received a robo-call recording from nationally recognized political mechanic Grover Norquist, who has credibility with conservative voters and a voice only a mother could love.

HAPPY COUPLE: At least, Gov. Brian Sandoval and Lowden look like a political dream team as depicted on the outdoor billboard sponsored by the Nevada Republican Party.

After seeing that big picture, voters might be tempted to think Sandoval also endorses Lowden in the Republican primary against Mark Hutchison. You don’t think that was the impression state GOP officials were trying to leave on the public, do you?

For the record, Sandoval endorses Hutchison.

BURGLARY FOLLOW: An arrest warrant has been issued for the juvenile son of Family Court Judge Mathew Harter in connection with a 2013 burglary. The judge first called police and has consistently denied attempting to influence the process.

“I always thought that I did the right thing,” Harter said Thursday.

Other teenagers involved were arrested and had their cases adjudicated months ago. The Harter teen rapped about the break-in on the Internet.

ON THE BOULEVARD: The Las Vegas FBI office lost one of its best this past week when intelligence analyst Elaine Warren retired after 30 years. She was part of investigative teams that worked everyone from Tony Spilotro to Rick Rizzolo. … After thumping Las Vegas as the location of the Mets’ top farm team, the New York press is starting to warm to the idea. A headline in this week’s New York Post: “Mets surge fueled by Vegas pipeline.” … Followers of deceased penny stock fraudster and Strip high roller Urban Casavant continue to claim he faked his death. Of course, many of those jilted investors still do not accept the fact Casavant faked his fabulous Canadian diamond mines.

Have an item for Bard of the Boulevard? Email comments and contributions to jsmith@reviewjournal.com or call (702) 383-0295. https://www.reviewjournal.com/columns-blogs/john-l-smith