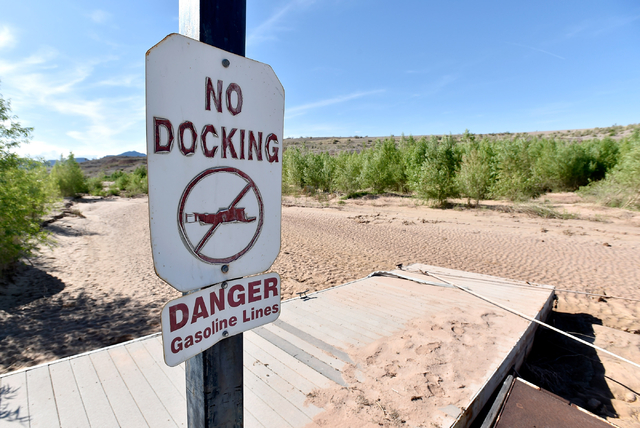 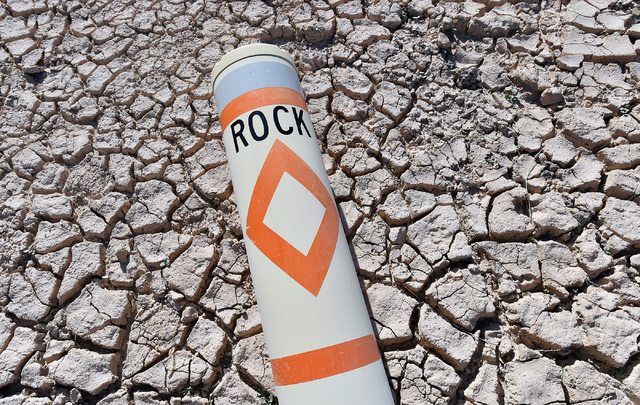 A warning buoy lies in the dry earth at the Echo Bay Marina Tuesday, April 26, 2016, at Lake Mead National Recreation Area. The shrinking reservoir could soon get a boost from what is shaping up to be one of the wettest winters on the Colorado River in 20 years. (David Becker/Las Vegas Review-Journal) @davidjaybecker 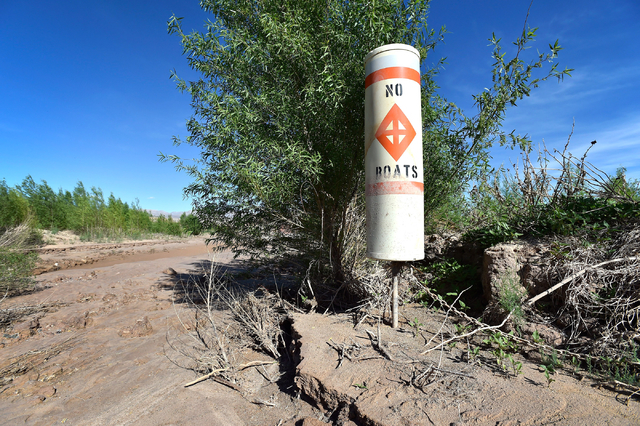 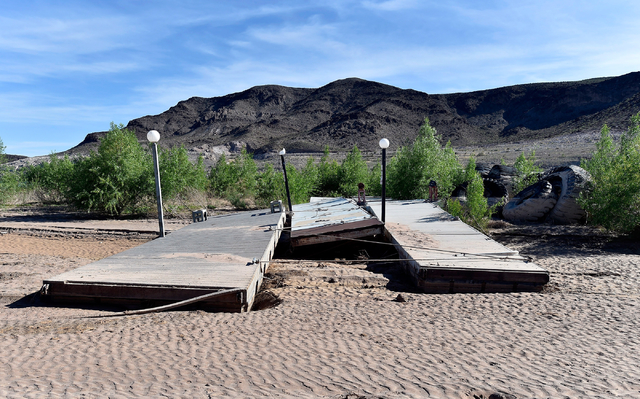 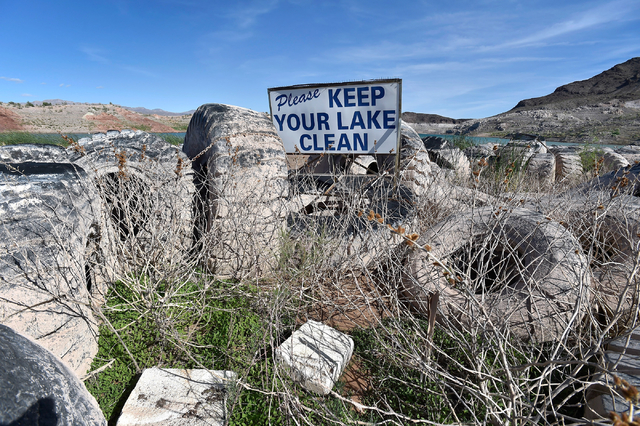 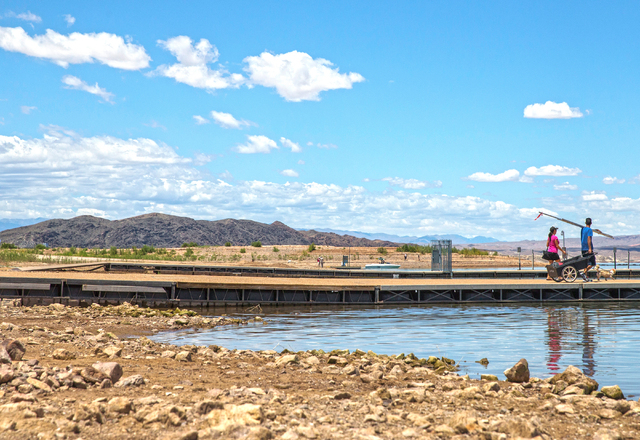 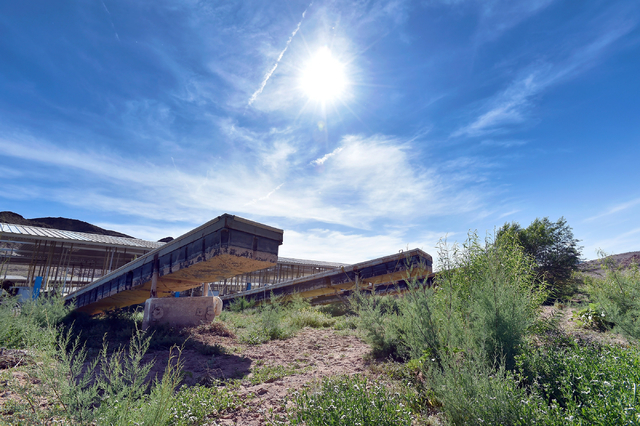 Boat docks are seen out of the water at the Echo Bay Marina Tuesday, April 26, 2016, at Lake Mead National Recreation Area. The surface of the lake has fallen 128 feet since drought took hold on the Colorado River in 2000. (David Becker/Las Vegas Review-Journal) @davidjaybecker 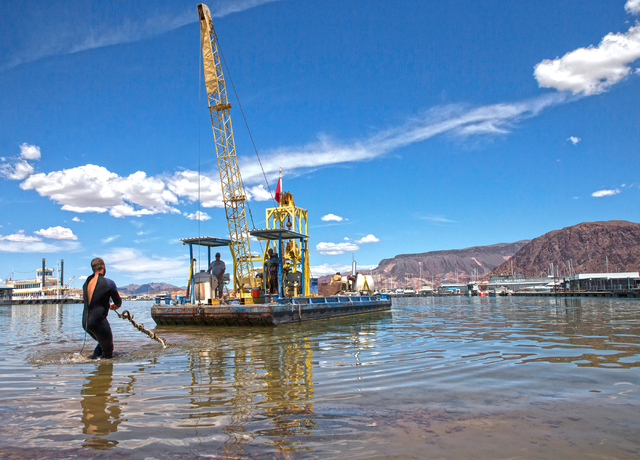 Paul Koons, left, with Las Vegas Boat Harbor, drags a line to shore at Lake Mead Marina, Wednesday, May 18, 2016, at Lake Mead National Recreation Area, in Boulder City, Nevada. The lines are connected to cement blocks that anchor the marina, and need to be adjusted as water levels drop. Benjamin Hager/Las Vegas Review-Journal 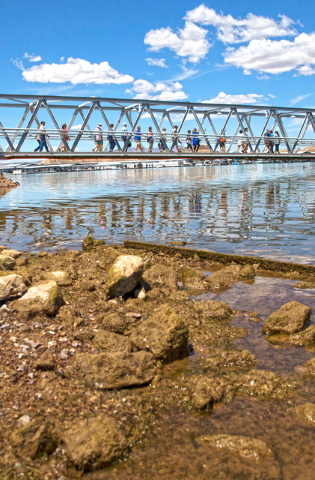 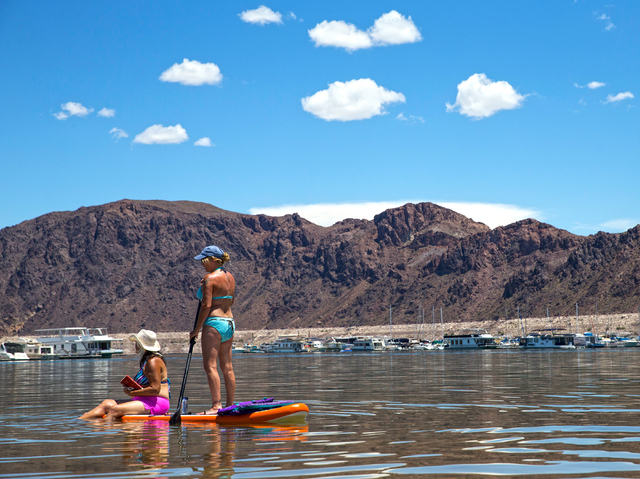 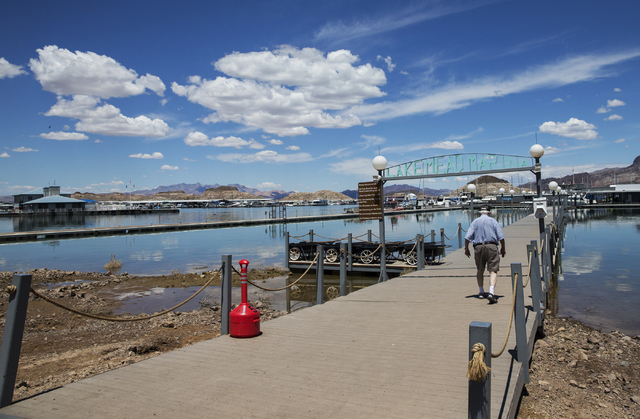 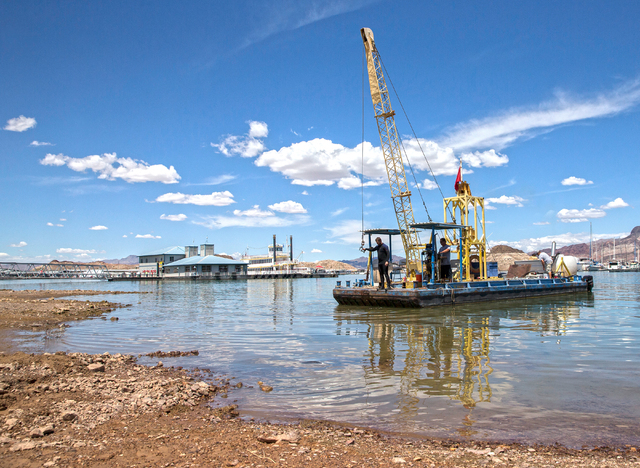 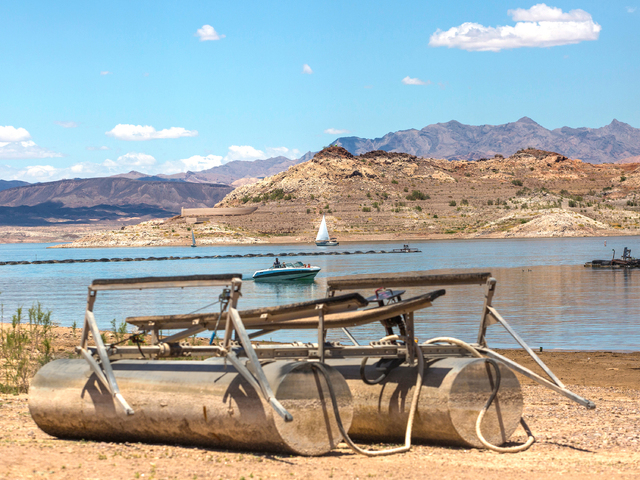 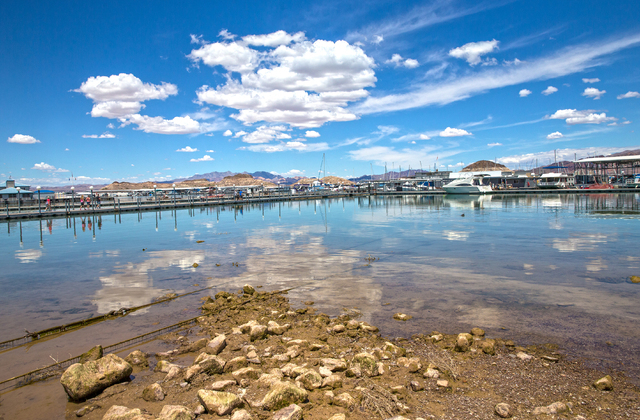 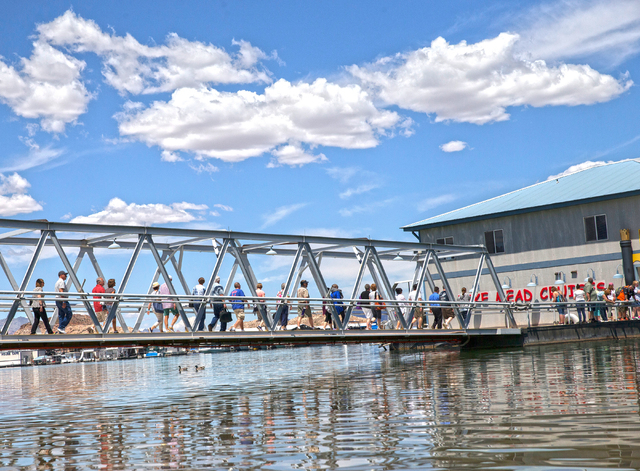 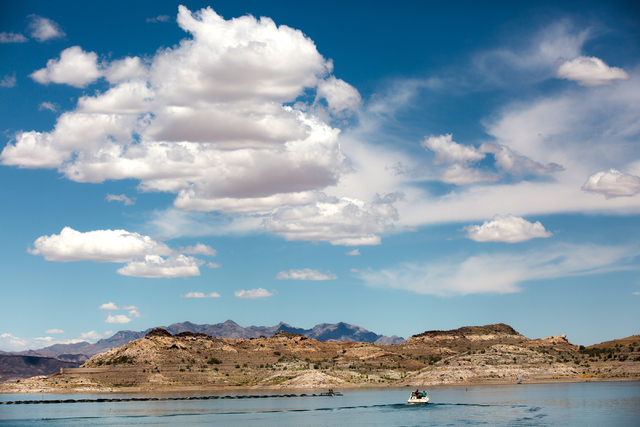 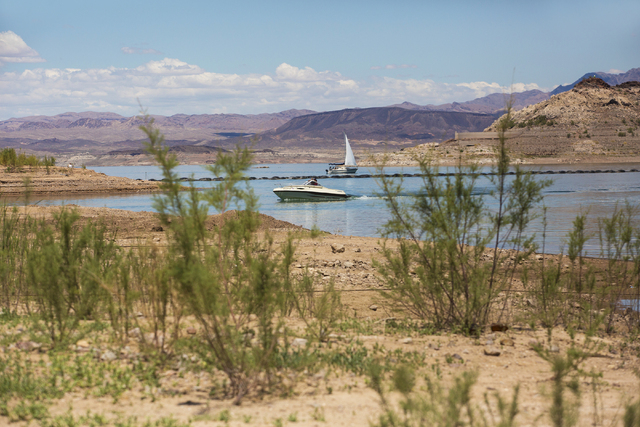 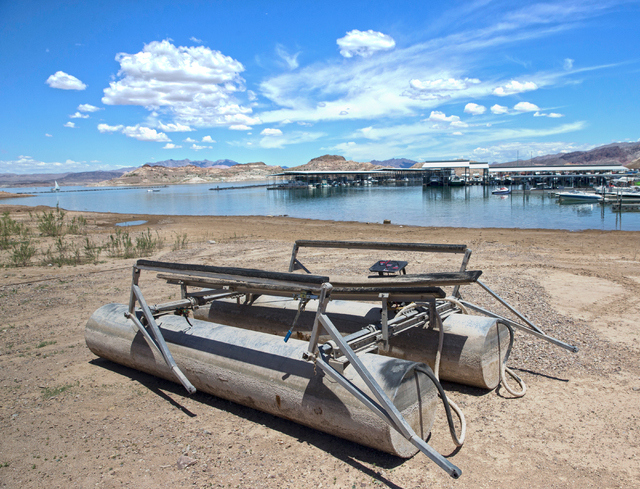 For the next two months, the news from Lake Mead could sound like a broken record.

The nation’s largest man-made reservoir slipped to a new record low sometime after 7 p.m. Wednesday, and forecasters from the U.S. Bureau of Reclamation expect see its surface drop another 2 feet through the end of June.

The latest dip into record-low territory comes as officials in Nevada, Arizona and California consider a new deal to prop up the declining lake by giving up some of their Colorado River water.

But some river advocates argue that those voluntary cuts could be rendered meaningless by proposed water developments that will further sap the overdrawn and drought-stricken river before it ever reaches Lake Mead.

Gary Wockner is executive director of Save the Colorado, a nonprofit conservation group based in Fort Collins, Colorado. He said the first round of cuts proposed by Nevada and Arizona would leave an extra 200,000 acre-feet of water in the lake, while the river system as a whole stands to lose approximately 250,000 acre-feet under new diversion projects being planned in Utah, Colorado and Wyoming.

Others see reason for hope.

Colby Pellegrino, Colorado River programs manager for the Southern Nevada Water Authority, said the “silver lining of this cloud” is the cooperative work among water managers, regulators and policymakers across the river basin. She said some of those collaborations have already made a tangible difference at Lake Mead, where the water would be even lower than it is now without some of the banking agreements and conservation efforts agreed upon by the states.

The voluntary reductions being discussed are designed to stave off deeper, mandatory cuts for Arizona and Nevada if the lake sinks below levels outlined in a 2007 agreement.

Nevada would leave 8,000 acre-feet of water in Lake Mead each year under the first round of voluntary cuts, while Arizona would give up 192,000 of its 2.8 million acre-foot Colorado River allocation to benefit the reservoir.

One acre-foot of water is enough to supply two average Las Vegas Valley homes for just over a year.

Elevation 1,045 is also where California would see its first voluntary cuts, which start at 200,000 acre-feet a year and increase by 50,000 with every additional 5-foot drop in Lake Mead. Under existing law, California is not required to give up any of its 4.4 million acre-foot river allocation, which is the largest among the seven states that share the Colorado.

Federal forecasters expect the lake to finish this June at elevation 1,070.98. The last time Lake Mead had so little water in it was May 1937, the month of the Hindenburg disaster, when the reservoir was filling for the first time behind a newly completely Hoover Dam.

Record-low water levels present more of an access problem than a supply problem for the Las Vegas Valley, which depends on the lake for 90 percent of its water.

Southern Nevada Water Authority officials insist Nevada’s comparatively small 300,000 acre-foot share of the Colorado River can be stretched enough through reuse and conservation to serve the growing community for decades to come. But to keep that water flowing from the shrinking lake, the agency is spending almost $1.5 billion on a new deep-water intake and pumping station.

Wherever this year’s low-water mark eventually lands, the record is not expected to stand for long. The current forecast calls for Lake Mead to start 2017 about 4 feet higher than it is now, then dip downward again into record territory in April. The reservoir should bottom out near elevation 1,063 sometime in June 2017.

Deaths reported as 7.8 quake knocks down buildings in Turkey, Syria
The Associated Press