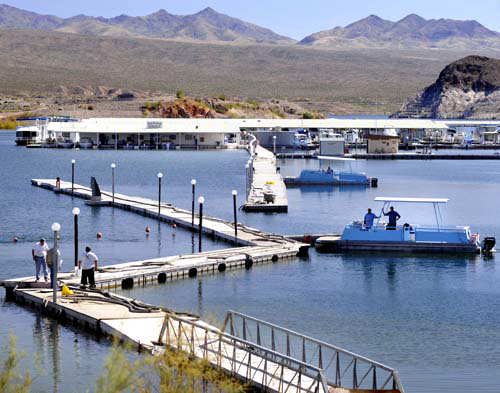 The water came back so quickly, Echo Bay Marina ran out of dock.

Lake Mead’s northernmost boat harbor was forced to close this week so the floating facility could be moved back to where it was four years ago, before the receding water line pushed it out about a third of a mile.

It’s a welcome new headache for those who make their livelihoods at the nation’s largest man-made reservoir. After a decade of declines, Lake Mead is now filling so fast marina operators and park personnel can scarcely keep up.

“It’s exciting to see it come up, but it’s a lot of work keeping up with it,” said Herb Riggle, operations manager at Echo Bay Marina.

Lake Mead was nearly full when Riggle first came to work at Echo Bay in 1998. The rangers stationed there at the time would park their patrol boats in the backyards of their Park Service houses just down the hill from Echo Bay’s hotel and restaurant.

It will take another 100 vertical feet of water for the lake to return to that level, but Riggle and others are happy to see it headed in the right direction.

On Oct. 19, 2010, the surface of Lake Mead slipped below the old low-water mark set during a drought on the Colorado River in 1956.

The lake continued its descent through Nov. 27 of last year, when it bottomed out at 1,081.85 feet above sea level.

Since then, the reservoir has filled in almost as dramatic fashion, gaining more than 37 feet in less than a year — most of it since April — thanks to record snowfall and runoff from the mountains that feed the river and Lake Mead.

The reservoir is now just over half full, and federal forecasters expect the water to continue to rise.

The current projections from the U.S. Bureau of Reclamation call for the lake to add 20 feet by the end of February and almost 30 feet by this time next year.

“I guess you have to be careful what you wish for,” said Randy Roundtree as he helped move Echo Bay Marina on Wednesday. “We prayed for high water for 10 years; then we get 65 feet in one year. It’s not what we bargained for.”

Roundtree is regional director for Forever Resorts, the company that operates three of the four marinas at Lake Mead, including Echo Bay.

The company tried to put off this week’s move as long as possible by extending the dock a section at a time as the water rose.

When workers ran out of dock sections, they built a dirt jetty so people could reach the marina without getting their shoes wet.

By Sunday, the jetty had been inundated. “We had to shut it down,” Roundtree said.

Moving the marina was no easy task. It took a crew of about 20 people — some on the surface, some on boats, some in dive suits working underwater — to relocate the floating collection of buildings, docks and slips.

Several dozen boats tied up at the marina went along for the ride.

The 2,000-foot move had to be done roughly 150 feet at a time, as two dozen concrete anchors — each weighing as much as 10,000 pounds — were lifted from the lake bottom and shifted toward the shore in stages.

The marina planned to restore some services to boaters by Thursday afternoon. All the work is to be finished today , allowing the marina 60 miles east of Las Vegas to fully reopen.

Logandale resident Paul Roden came out to watch the big move on Wednesday.

“I just came for fun,” Roden said as he leaned on the hood of his car and looked out at the water. “I was going to go out on the boat, but the dock was gone when I got here.”

Roundtree said marinas at Lake Mead regularly shift their operations a few hundred feet as the water level changes, but moves of this size are rare.

It’s also rare for the lake to rise or fall so far so quickly.

Lake Mead has been gaining about a foot of water a week for the past five months.

That pace is expected to almost double in December.

Depending on the slope of the land, a 1-foot change in the surface of the lake can cause the shoreline to shift by 15 feet or more, dramatically rewriting the landscape.

Earlier this year, the National Park Service spent about $1.5 million on a new dirt road and concrete launch ramp to reach the shrinking lake at Echo Bay.

The lake has since swallowed portions of that project, which was paid for with proceeds from the sale of public lands in the Las Vegas Valley.

A dirt parking lot that boaters at Echo Bay used as a loading area as recently as the Fourth of July weekend is now submerged beneath almost 20 feet of water.

In the next few days, the rising lake is expected to overtake another dirt lot nearby, the one where workers parked their vehicles this week while they moved the marina.

Forever Resorts hopes the rising tide will help lift the bottom line at Echo Bay, which has struggled in recent years.

Boat rentals are down, and the hotel and restaurant on the hill above the marina shut down for good in August 2010, a victim of low occupancy and mounting structural problems.

Roundtree said the overall economy certainly hasn’t helped, but “the low water is what caused the lack of business.”

Riggle is hoping those days are over for a while, even if the rising water means more work for him.

That’s just how the marina business works, he said with a shrug.