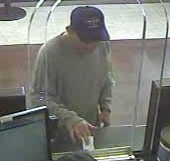 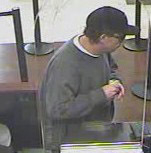 Las Vegas police asked the public for help Thursday in finding a man involved in two bank robberies in January.

The robberies took place on Jan. 21 and 29 in the area near Flamingo and Pecos roads. On both occasions, the robber handed a note to a bank teller demanding money and fled, police said.

The robber is described as 45 to 60 years old, from 5 feet 6 inches to 5 feet 8 inches tall, with brown hair and a medium build. He was last seen wearing a blue cap, a gray, long-sleeve shirt and blue jeans.

Officials did not say whether the man was armed during the robberies.

Anyone with information on the suspects or the crime is asked to call police at 702-828-3591 or, to remain anonymous, Crime Stoppers at 702-385-5555 or visit www.crimestoppersofnv.com.