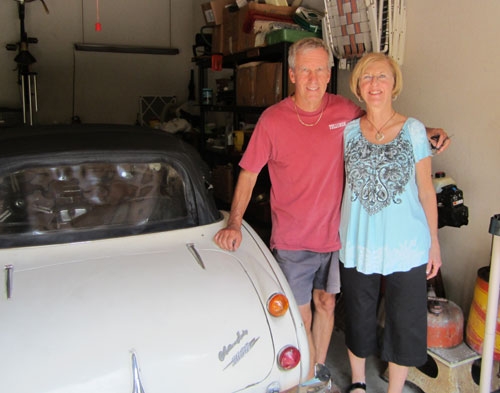 LOS ANGELES – A Texas man whose prized sports car was stolen 42 years ago recovered the vehicle in California after spotting it on eBay, authorities said Sunday.

Robert Russell told the Los Angeles County sheriff’s officials that he had never given up searching for the 1967 Austin-Healey after it was stolen from his Philadelphia home in 1970.

The 66-year-old retired sales manager from Southlake, Texas, told the Dallas Morning News (http://dallasne.ws/ML2fBq ) he paid a friend $3000 for the car. It had sentimental value to him because it was stolen the morning after he took his future wife out on their second date.

Russell said he spent years surfing the Internet looking for the car and didn’t have much hope of finding it.

"The fact that the car still exists is improbable," he said. "It could have been junked or wrecked."

He said he checked on eBay periodically and spotted it a few weeks ago. He immediately called a Beverly Hills car dealership that was selling it.

He said the vehicle’s identification number matched that of his car. He had the original key and car title, but not a copy of the stolen-car report to prove that it was stolen from him.

Russell contacted Philadelphia police for help and learned that the stolen-car report wasn’t showing up at the FBI’s national crime index because one vehicle identification number was entered incorrectly. The report was finally found and the file was reactivated, enabling Los Angeles authorities to impound the car.

Russell and his wife, Cynthia, drove to Los Angeles and took possession of the car. It’s now valued at $23,000.

"It still runs, but the brakes don’t work well," he said. "We’re going to put it back the way it was."