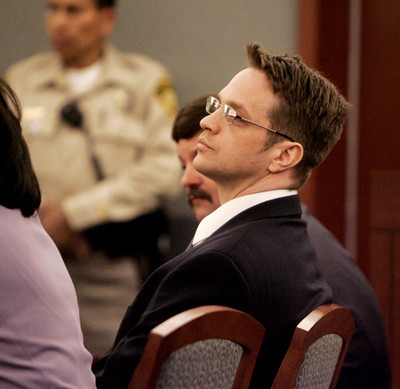 A jury today is to begin considering whether death is the appropriate punishment for robbing and killing a 22-year-old man and then hacking up his body inside a Strip hotel.

Miller’s torso was found on April 25, 2002, in a suitcase that had been dumped in a trash bin at the Copper Sands apartment complex in the 8100 block of West Flamingo Road.

According to court documents, Miller had come from Phoenix to Las Vegas in search of pills to make methamphetamine. Dozier was to help him find a connection to purchase the pills. They stayed at the La Concha Hotel, where Dozier frequently did maintenance work.

Dozier became the chief suspect after police interviewed his friends in the ensuing years. One friend said he saw a head and a decapitated body in the bathtub of Dozier’s room at the La Concha. Another said Dozier told him he shot Miller in the head. A third witness said she visited Dozier during his Las Vegas stay and he had a body in a suitcase in a hotel room.

Authorities alleged that Dozier killed Miller to steal $12,000 from him.

Dozier’s defense lawyers tried to convince the jury that the man who lent the money to Miller, an elderly Phoenix drug mogul known only as Darryl or “Grandpa,” had more motive to kill Miller.

They said Miller was a drug dealer who had begun to use his own product, had been cut off by his drug source and owed money to shady sources.

They emphasized that Las Vegas police never found any blood at the La Concha, which has since been torn down.

Miller’s family, who hail from Arizona, hugged after the verdict. They declined to comment about the verdict, as did prosecutors and defense attorneys.

The penalty phase of Dozier’s trial is to begin this afternoon. The jurors can sentence him to death, life in prison without the possibility of parole or 40 years to life in prison.

Defense attorney Alzora Jackson said Dozier’s family and psychiatrists will speak at the penalty hearing to try to persuade the jurors to spare Dozier’s life.

During the course of the investigation into Miller’s death, police uncovered another victim of Dozier’s who was dismembered and buried in the desert in Arizona. Dozier was found guilty of second-degree murder in that case and in 2005 was sentenced to serve 22 years in prison, according to court records.