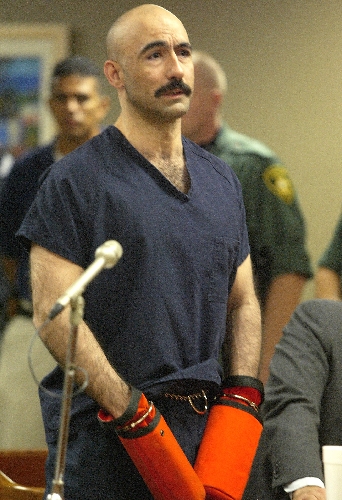 A major film project is in the works about a violent “Ocean’s Eleven”-like crime spree that rattled Las Vegas casinos a decade ago.

An adaptation of John Huddy’s 2008 book “Storming Las Vegas,” the film will profile the pursuit of Jose Vigoa, mastermind of the deadly rampage.

The full title of the book says it all: “Storming Las Vegas: How a Cuban-Born, Soviet-Trained Commando Took Down The Strip to the Tune of Five World Class Hotels, Three Armored Cars, and Millions of Dollars.”

Deadline.com reported on Thursday that Summit Entertainment, after acquiring rights to the book, has signed Antoine Fuqua. Fuqua directed “Training Day, ” starring Denzel Washington, who won a best actor Oscar for his role in the film.

Vigoa, who was sentenced to more than 500 years in prison, was described by then-Chief Deputy District Attorney David Roger as “one of the most dangerous criminals in the history of Clark County.”

To avoid the death penalty, Vigoa pleaded guilty to dozens of criminal counts, including the March 3, 2000, robbery and murders of armored truck guards Gary Prestidge II, 23, and Richard Sosa, 47.

Summit has been on a roll with blockbusters “The Hurt Locker” (six Oscars) and “Twilight Saga: New Moon,” a monster success.

Vigoa’s nemesis in the film reportedly will be Las Vegas police Lt. John Alamshaw, who was in charge of robbery detectives at the time of the five casino holdups.

Huddy’s book delved into Vigoa’s shadowy past: Raised in Cuba, he became a Soviet-trained commando who fought in Afghanistan.

It is not clear when filming will start or who will be cast in the leading roles, according to Deadline.com

Fuqua will be tied up for a while directing “Tupac,” the biopic of rap star Tupac Shakur, who was shot by an unknown assailant in Las Vegas in September 1996.

Russo’s character ratted out Sonny Corleone (James Caan), who was killed by a rival gang.

In the 2004 reality TV show “Growing Up Gotti,” Russo was a secret admirer who sent roses to Victoria Gotti, the daughter of the late New York mob boss John Gotti. When she found out, she bolted.

Vince Vaughn, walking away from a Mandalay Bay blackjack table with $30,000 in winnings on Thursday. An eye spy said he left a $25 tip. … Eva Longoria, having dinner at her steakhouse, Beso (CityCenter), on Wednesday with Bill Grounds, the Australian who heads Dubai World’s investment in MGM Grand’s CityCenter. … At Criss Angel “Believe” (Luxor) on Wednesday: David Hasselhoff and girlfriend Hayley Roberts and in another party, boxing legend Roberto Duran.

“Happy birthday to Arnold Schwarzenegger. He celebrated quietly with half his money.” — David Letterman