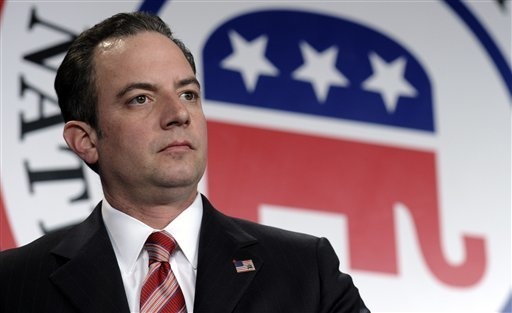 NEW YORK — MSNBC’s president apologized for an offensive tweet and fired the person responsible Thursday after a top Republican suggested that GOP officials should boycott the news network.

In a statement read on the air, MSNBC President Phil Griffin said a tweet suggesting the right wing will hate a Cheerios ad that features a biracial couple was “outrageous and unacceptable.” Griffin said he personally apologized to Republican National Committee Chairman Reince Priebus and to everyone offended.

“At MSNBC we believe in passionate, strong debate about the issues and we invite voices from all sides to participate,” Griffin said of his network, where many of the major personalities lean left.

Priebus had said earlier Thursday that he would no longer appear on MSNBC until getting a personal apology for the network’s “petty and demeaning attacks.” In a statement later, he said he accepted the apology and was withdrawing his boycott request.

“We will aggressively monitor the network to see whether their pattern of unacceptable behavior actually changes,” Priebus said. “We don’t expect their liberal bias to change, but we will call them out when political commentary devolves into personal and belittling attacks.”

The cable network has been on a run of apologies for offensive remarks the past couple of months, some directed at Republicans.

Alec Baldwin apologized, and subsequently left the network, for using an anti-gay slur in a New York City street confrontation. Martin Bashir resigned after he made graphic remarks about former Alaska Gov. Sarah Palin, suggesting someone should defecate in her mouth. Melissa Harris-Perry apologized after some people on her show joked about Mitt Romney’s family Christmas card, which showed the Republican’s adopted, African-American grandson.