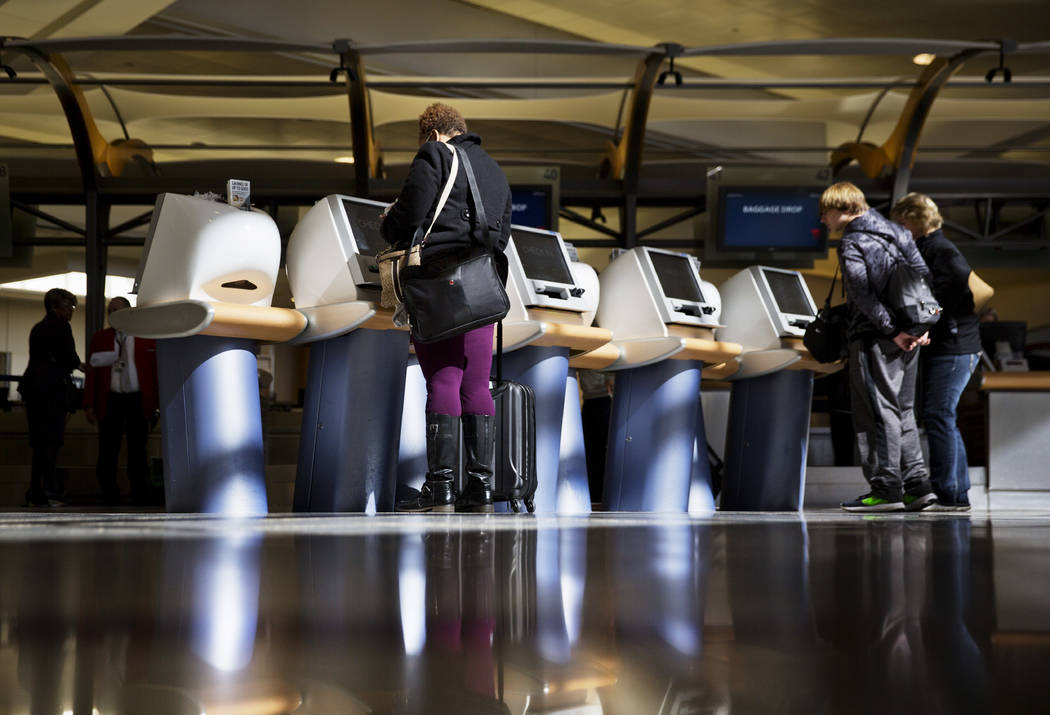 FILE - In this Jan. 30, 2017 file photo, passengers check in for Delta Air Lines flights at kiosks at Hartsfield-Jackson Atlanta International Airport in Atlanta. Major U.S. airlines say they will soon change their ticketing process to give passengers an option to identifying themselves as male or female. The gender option on airline sites will soon include choices such as "Mx." or "undisclosed." American, Delta and United confirmed Friday, Feb. 15, 2019, that they are in the process of updating their booking tools to add such an option. They said the change will be made in the next several weeks. (AP Photo/David Goldman, File)

DALLAS — Major U.S. airlines say they will soon change their ticketing process to give passengers the option of identifying themselves as other than male or female.

The gender option on airline sites will soon include choices such “undisclosed” or “unspecified.” There could also be the optional title of “Mx.”

The airlines say they are making the change to be more inclusive in dealing with a diverse population of travelers.

The move was praised by advocacy groups for transgender people.

“It’s a significant step forward for nonbinary individuals, so they are not faced with a mismatch between their ticketing information and their legal identification,” said Beck Bailey of the Human Rights Campaign.

The Transportation Security Administration says passengers should use the name, gender and birth date on their government-issued ID.

Bailey said he did not know of people with nonbinary identification being kept off planes or trains, but that fear of being stopped added to their stress.

American, Delta, United, Southwest, Alaska and JetBlue confirmed Friday that they are in the process of updating their booking tools and plan to add a binary option to the gender menu on their sites. They said the change will be made in the next several weeks.

“We certainly have a very diverse customer base. This will be well-received, and we’re happy to do it,” American Airlines spokesman Matt Miller said.

United Airlines plans to let people select M for male, F for female, U for undisclosed or X for unspecified from the gender menu when booking a ticket on its website or mobile app, said spokeswoman Andrea Hiller. They will also have the option of picking “Mx.” as a title.

Hiller said the airline wants to make sure that “all of our customers feel comfortable and welcome no matter how they self-identify.”

U.S. and international airline trade groups recently approved a new standard to handle customers with “nonbinary” IDs. The standard, which is not mandatory but more like guidance, takes effect June 1.

Airlines for America and the International Air Transport Association say the change will let airlines comply with requirements under U.S. and foreign laws that passenger information must match what is on the person’s form of ID used for travel.

In 2017, Oregon became the first state to let residents identify themselves as neither male nor female on driver licenses and other ID cards. California, Colorado, Maine, Minnesota, Arkansas and Washington, D.C., also allow a nonbinary choice on licenses.

Those changes led the National Center for Transgender Equality and Human Rights Campaign to recommend that transgender people carry a second identification such as a passport that shows their sex as it appears on their ticket.

David Koenig can be reached at http://twitter.com/airlinewriter