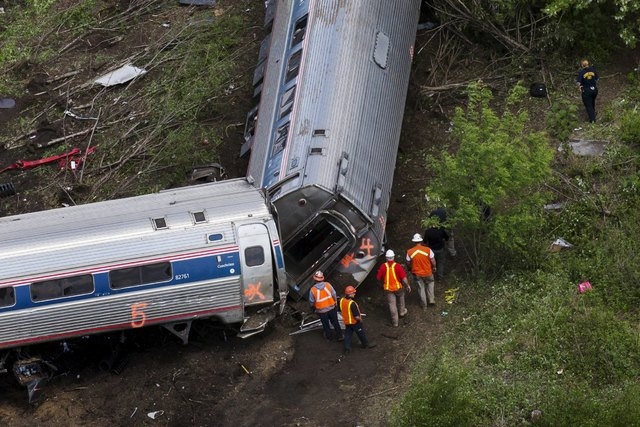 Emergency workers and Amtrak personnel inspect a derailed Amtrak train in Philadelphia, May 13, 2015. The commuter rail route where an Amtrak train left the track on Tuesday was not governed by an advanced safety technology meant to prevent high-speed derailments, officials familiar with the investigation said on Wednesday. (Reuters/Lucas Jackson) 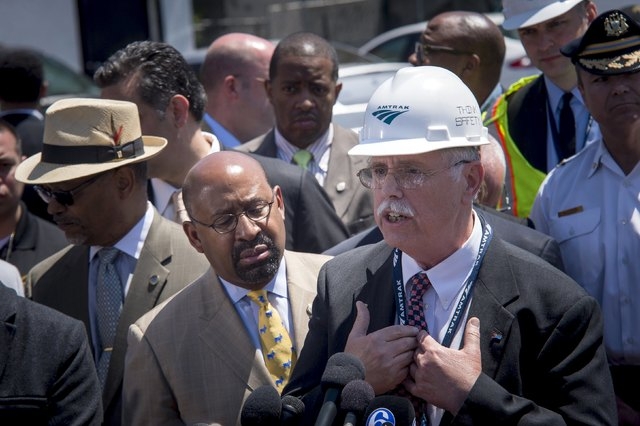 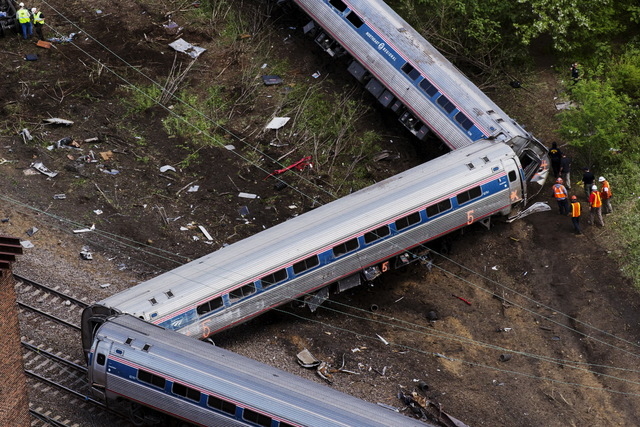 Phone records indicate Amtrak engineer Brandon Bostian was not using his cell phone for calls, texts or the Internet while he was operating a train that crashed May 12 in Philadelphia, the National Transportation Safety Board said Wednesday. The wreck left eight people dead and more than 200 injured.

Whether Bostian was distracted by his phone was one of the lines of inquiry investigators pursued as they try to determine why the train went into a curve at more than twice the speed limit and derailed minutes after leaving a Philadelphia station.

Bostian told investigators last month he didn’t recall anything that happened after he pulled the whistle as he drove past the North Philadelphia station, three miles before the crash.

“Analysis of (Bostian’s) phone records does not indicate that any calls, texts or data usage occurred during the time the engineer was operating the train,” the NTSB said in a statement Wednesday.

Amtrak’s records show that the engineer didn’t use the train’s Wi-Fi system while operating the locomotive, the NTSB said.

Amtrak Northeast Regional Train No. 188 was bound for New York when it derailed in Philadelphia at 9:21 p.m.

The train had just entered a curve at 106 mph, though the curve had a speed limit of 50 mph. The engineer applied emergency brakes as it entered the curve, but the locomotive and all seven passenger cars derailed, the NTSB said in a preliminary report.

While the records show the phone wasn’t being used to make or receive calls or texts or download Internet data at the time of the crash, investigators haven’t determined whether the phone was off, the NTSB said.

An attorney for Bostian, Robert Goggin, said last month that Bostian wasn’t drunk, drugged or distracted by his cell phone on the night of the crash.

Investigators have been frustrated by the lack of clarity about what went on inside the cab of the train that crashed. Currently, Amtrak trains have cameras facing outward, along with a so-called black box, or data recorder that measures locomotive and engineer actions.

Amtrak announced in late May that it would begin installing inward-facing cameras.

After the crash, the Federal Railway Administration also ordered Amtrak to add more speed limit signs along the tracks. Amtrak also has installed technology on the northbound side that would slow a train down automatically as it enters that curve in Philadelphia if it is going too fast.