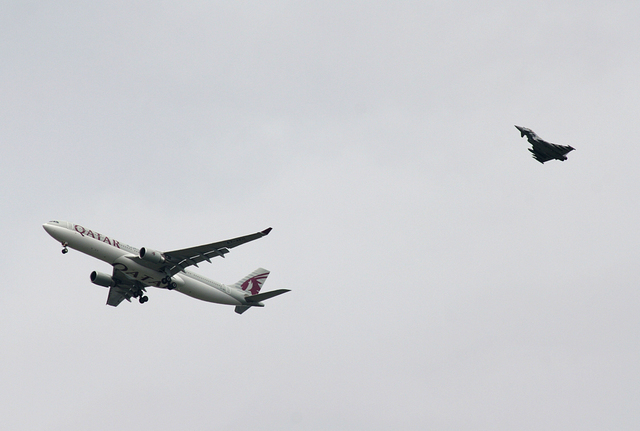 A military fighter jet escorts a passenger jet as it comes in to land at Manchester airport, Manchester, England, Tuesday, Aug. 5, 2014. Police say they have arrested a man on suspicion of making a hoax bomb threat after Qatar Airways Flight 23 landed with a military fighter escort at Britain's Manchester Airport. (AP Photo/Matthew Cossar) 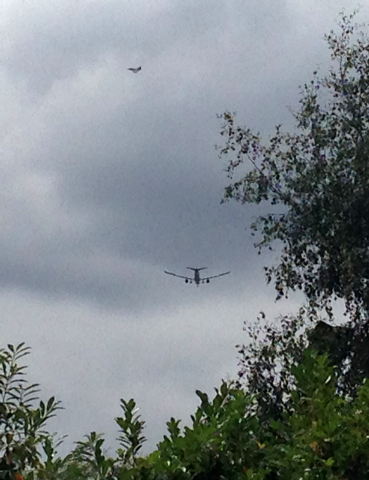 A military fighter jet is seen near a passenger jet as it comes in to land at Manchester airport, Tuesday, Aug. 5, 2014. Police say they have arrested a man on suspicion of making a hoax bomb threat after Qatar Airways Flight 23 landed with a military fighter escort at Britain's Manchester Airport. (AP Photo/Nick Arnold)

LONDON — British police arrested a man Tuesday on suspicion of making a hoax bomb threat aboard a Qatar Airways plane bound for Britain that forced Royal Air Force fighter jets to escort the jet to a safe landing.

Qatar Airways Flight 23, carrying 269 passengers and 13 crew on a flight from Doha, Qatar, landed without incident at Manchester Airport, the flight’s original destination.

Qatar Airways said in a statement that the crew on the Airbus A330-300 received a “threat about a possible device on board” and immediately alerted British authorities. It did not clarify the nature of the threat or say how it was communicated.

Greater Manchester Police had been dealing with the incident as a full emergency, and the runway was briefly closed. After landing, the plane was moved to a designated area to allow specialist officers to board, and the suspect was swiftly removed.

The Ministry of Defense said the fighters were launched to investigate “a civilian aircraft whose pilot had requested assistance.”

“The aircraft was escorted to Manchester where it landed safely,” the ministry said in a statement. “This incident is now being handled by the civilian authorities.”

Crew members were assisting police with the investigation, the carrier said. It said that it could not comment further because the matter is part of a police investigation.