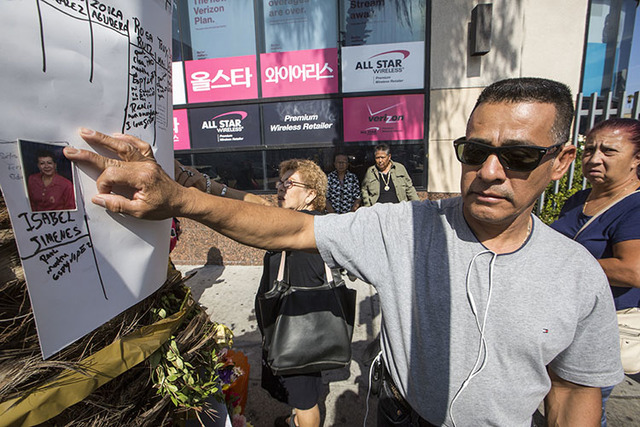 Tomas Hernandez holds a photo of his late sister, Isabel Jimenez Hernandez, who was killed in a gambling tour bus accident, at a makeshift memorial in Los Angeles. (Damian Dovarganes/The Associated Press) 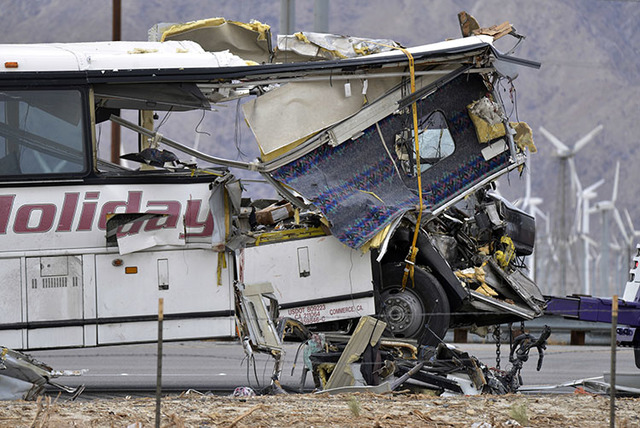 This Oct. 23 photo shows the wreckage of a tour bus that collided with a big rig on Interstate 10 in Desert Hot Springs, Calif., near Palm Springs, Calif. (Rodrigo Peña/The Associated Press) 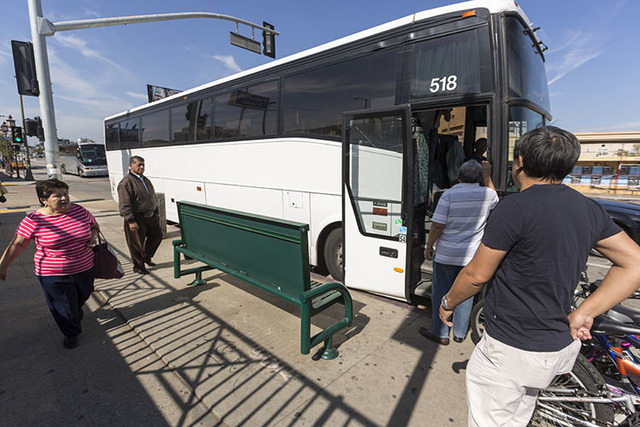 LOS ANGELES — Rosa Ruiz returned from a gambling jaunt to San Diego before dawn Saturday and was back on another bus that evening, headed for a desert casino.

Like others who routinely board buses bound for distant casinos, Ruiz wasn’t so much dreaming of striking it rich, just escaping her normal life for a few hours to socialize, snack and play the slots.

But this night out ended in disaster on the freeway near Palm Springs when the bus slammed into a tractor-trailer in the pre-dawn darkness Sunday. Ruiz was killed along with 12 others, including the bus driver who also owned the USA Holiday bus. It was the latest in a growing number of casino bus tragedies around the country, from New York to Minnesota to Texas.

Fatalities involving casino buses have become so frequent that the National Transportation Safety Board, which investigates major crashes, is studying them for common patterns, said Earl Weener, an NTSB board member overseeing the crash probe of the USA Holiday bus.

As casinos have proliferated, buses ferrying gamblers have become a fixture. Many, like Ruiz, travel from big cities to out-of-the-way casinos and stay for as little as four hours before the buses head home.

The tours typically draw a similar demographic: older, lower-income and, often, minorities. Many of those killed in the crash last weekend were Latinos, and they boarded the bus in the Koreatown neighborhood of Los Angeles.

Day and night, people line up at street corners, parking lots and fast food restaurants across the Los Angeles area where the buses arrive and depart for short casino trips.

At the Koreatown location where Ruiz, 53, embarked on her last journey, fellow travelers gathered this week to light votive candles, stick roses and daisies in the bark of a palm tree and remember their lost friends. All the while, white buses pulled up to shuttle others to casinos in the desert or Santa Barbara and San Diego counties.

These so-called curbside carriers are often mom-and-pop operations that have proliferated in the U.S. for tours of all kinds, including gambling trips. Government regulators are stretched to try to ensure all are abiding by safety rules.

Attorney Katherine Harvey-Lee, who has sued bus operators, said casinos typically pay a per-passenger fee to smaller operations like USA Holiday, the one-bus operation owned by Teodulo Elias Vides, who was also the lone driver. Gamblers usually get $20 to $30 in tokens or casino credits.

Vides charged $20 for the roundtrip to Red Earth Casino, a bare-bones operation in the community of Thermal, with about 3,000 residents living next to the Salton Sea, California’s largest lake. A gas station and convenience store help draw travelers on Interstate 10, but the casino, packed with penny slots, lacks amenities and glitz. The dining area resembles a school cafeteria with basic offerings of pizza and sandwiches.

The bus would have passed bigger, fancier and better-known Indian casinos to reach the destination 135 miles from LA.

“The fact that this is a way for them to bring gamblers from hundreds of miles away to a place they would never go or would ever have heard of makes one think there has to be a relationship between the operator and the casino,” Harvey-Lee said. “They weren’t going to a place where some celebrity was playing in the lounge.”

The general manager at Red Earth Casino did not return a call seeking comment.

Investigators are looking at Vides’ relationship with the casino along with possible mechanical issues on the bus and what Vides did in the hours leading up to the crash to see whether alcohol or fatigue or some other factor might have contributed.

In the first lawsuit filed in connection with the crash, family members for two men killed on the bus sued USA Holiday and Vides’ estate Thursday for negligence and wrongful death.

The bus was traveling “freeway speeds,” and it did not appear to brake before slamming into the big rig that was moving at 5 mph as it approached utility work, California Highway Patrol Border Division Chief Jim Abele said. The crash occurred just after 5:15 a.m. when most passengers were sleeping.

While the survivors of the crash and others who routinely board casino-bound buses said the trips are mostly for fun and socializing, there can be a darker side.

Concerned that casinos were targeting vulnerable elders in San Francisco’s Chinatown, a health care organization there tried unsuccessfully to distribute brochures about problem gambling on buses and at tour bus offices. The companies wouldn’t cooperate, so workers hand out literature on sidewalks near the buses.

“For so many of our clients, that trip to the casino represents hope,” said Michael S. Liao of NICOS Chinese Health Coalition.

The reality is that most of those people end up losing, and some carry huge debts.