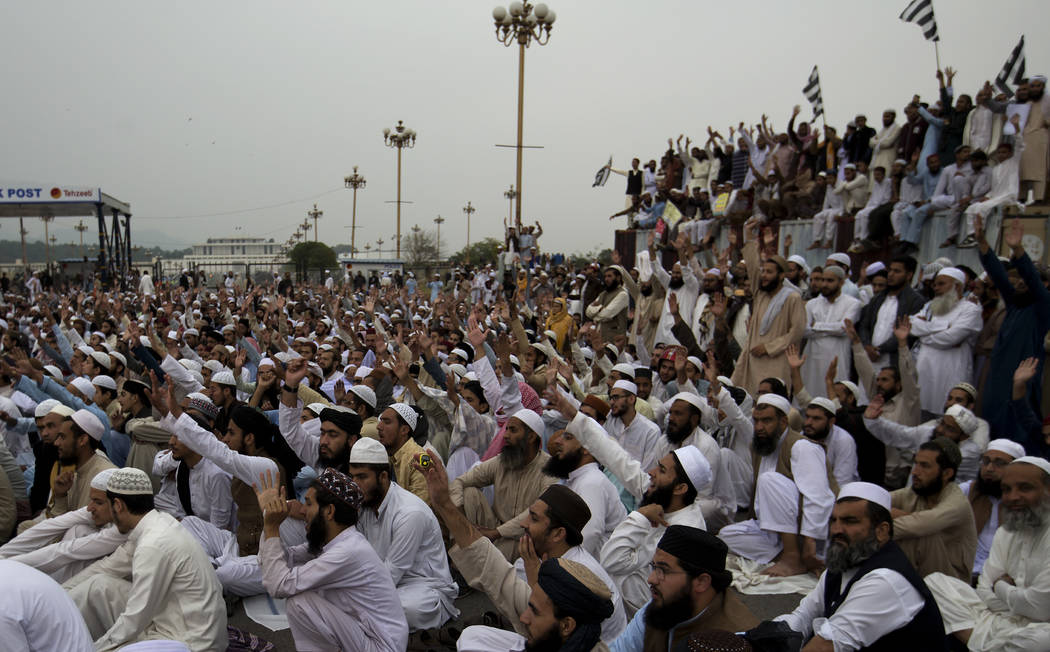 Supporters Pakistani religious party Jamiat Ulema-e-Islam rally near the Parliament to condemn a Supreme Court decision that acquitted Asia Bibi, a Christian woman, who spent eight years on death row accused of blasphemy, in Islamabad, Pakistan, Friday, Nov. 2, 2018. The release of Bibi was apparently delayed Friday after talks failed between the government and radical Islamists who want her publicly hanged. (AP Photo/B.K. Bangash) 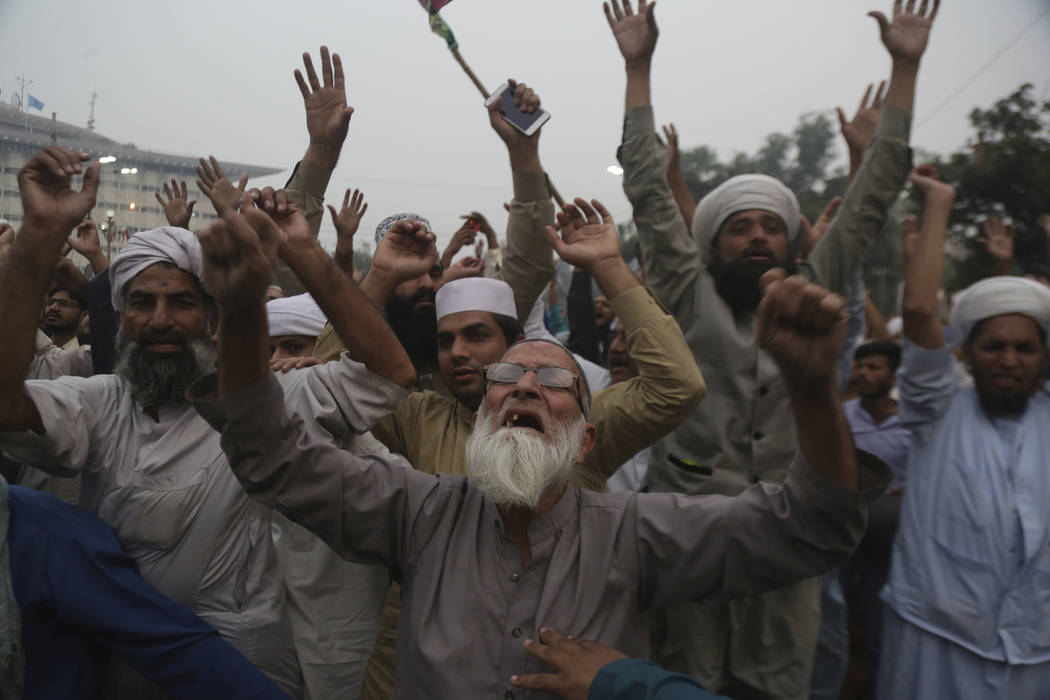 Protesters shout slogans during a rally to condemn a Supreme Court decision that acquitted Asia Bibi, a Christian woman, who spent eight years on death row accused of blasphemy, in Lahore, Pakistan, Friday, Nov. 2, 2018. The release of Bibi was apparently delayed Friday after talks failed between the government and radical Islamists who want her publicly hanged. (AP Photo/K.M. Chaudary)

ISLAMABAD — A Christian woman acquitted after eight years on death row in Pakistan for blasphemy was released but her whereabouts in Islamabad on Thursday remained a closely guarded secret in the wake of demands by radical Islamists that she be publicly executed.

Aasia Bibi was with her family and under heavy security after being transferred to the Pakistani capital overnight from her detention facility in southern Punjab, triggering expectations that her departure from the country could be imminent.

The European Parliament has made an offer to protect Bibi and her family but for the moment she was still in Pakistan, according to two people close to her. They spoke on condition of anonymity so as not to endanger Bibi’s life.

Radical Islamists have been demanding Bibi’s death as well as the death of the three Supreme Court judges who acquitted her last week.

Following her acquittal, the hard-line Tehreek-e-Labbaik Party forced a country-wide shut down as their supporters took to the streets for three days to protest Bibi’s release.

Scores of protesters were arrested for damaging vehicles and property during the rallies and bank accounts of some of the leaders of the party were reportedly frozen.

The rallies only dispersed after Prime Minister Imran Khan’s government promised a court would review a motion to challenge the acquittal and deny Bibi permission to leave Pakistan.

Critics immediately accused Khan, who came to power after elections last summer riding in part on an Islamist agenda, of capitulating to the radicals.

Bibi’s release, her high-security transfer to Islamabad and her likely departure raised the prospect that Khan’s “promises” to the Islamists could have been an effort to buy time. The government, however, has not openly declared Bibi was free to leave the country.

The radical Tehreek-e-Labbaik, in a widely circulated video message, said it received government assurances following Bibi’s relocation to Islamabad that she wouldn’t leave the country until the review petition was heard.

Bibi’s ordeal began on a blistering hot day in 2009 when the 54-year-old mother of five, a farmworker, went to fetch water. An argument took place after two fellow women farmworkers refused to drink from the same container as a Christian.

Nearly a week later, the two women said Bibi had insulted the Prophet Muhammad and she was charged with blasphemy — a controversial issue in Pakistan, where mere accusations of blasphemy can cause riots. The charge itself carries the death penalty. Bibi was sentenced to death in 2010.

In a letter, European Parliament President Antonio Tajani invited Bibi and her family to Europe. In the letter, a copy of which was seen by The Associated Press, Tajani tells Bibi’s husband Ashiq Masih, that the European Parliament is “extremely concerned for your safety as well as your family’s, due to the violence by extremist elements in Pakistan.”

The letter added to expectations that Bibi and her family would leave for Europe, though their destination has not been confirmed. Earlier, Spain and France had offered her asylum.

Speaking to the AP earlier this week in the Punjab capital of Lahore, Masih said he hasn’t slept much since Bibi’s acquittal and the subsequent Islamist rage.

Fear consumes him every time his phone rings and the shouts of the radicals, “Hang her!” haunt him constantly, he said.

“Sometimes I pace on the rooftop, sometimes I walk on the road outside our home,” he said. “I look at the faces around me and I wonder if anyone is waiting to hurt us.”

His initial joy at the acquittal quickly turned to heart-wrenching sadness when he realized his wife and his family’s ordeal was still not over.

Even mere suggestions of blasphemy can whip mobs into a lynching frenzy in Pakistan. In 2011, the governor of Punjab, Pakistan’s most populous province, was killed by his own guard after he defended Bibi and criticized the blasphemy law. A year later, the minister for minorities, Shahbaz Bhatti, a Christian, was shot and killed.

For Bibi’s husband, leaving Pakistan is a painful decision but still a matter of life and death.

“We have no other choice but to leave,” he said. “I love Pakistan but I can’t live here.”

Even in Bibi’s dirt poor home village of Aitta Wali — a poor farming community where animals and villagers share tiny sunbaked mud houses — villagers are still outraged by her acquittal and warned a visiting AP reporter to “go. Just get out. Go.”

“Our entire village swore on the Quran that she insulted the prophet but no one believes us and everyone believes her,” said Aman Ali, one of the villagers. “Before this we liked the Christian families. We always got along. But now there is only anger.”

Muhammad Afzal Qadri, a leader in the Tehreek-e-Labbaik Party and religious scholar, said he doesn’t regret calling for the deaths of the judges who acquitted Bibi — or for calling on his followers to overthrow Khan’s government.

At his sprawling madrassa in the Punjab city of Gujrat, Qadri told the AP this week that he had the religious authority to declare a fatwa, or edict, demanding the judges be killed.

Pakistan is bound by Islamic injunctions, he said, adding that he was qualified to decide such matters. The West only seeks to undermine Pakistan’s Islamic traditions and culture, Qadri said.

Zahid Hussain, author of two books on militancy in Pakistan, said Islamists rallies over Bibi’s acquittal were an attempt to regain positions the extremists had lost in the July elections.

“They are trying to mobilize people on this issue, creating more extremism,” said Hussain. “They have created a sense of fear in society, for anyone who disagrees with their view of Islam.”