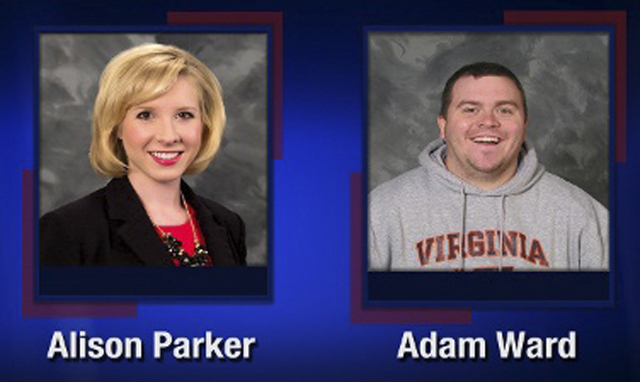 Alison Parker and Adam Ward are pictured in this handout photo from TV station WDBJ7 obtained by Reuters August 26, 2015. REUTERS/WDBJ7/Handout via Reuters 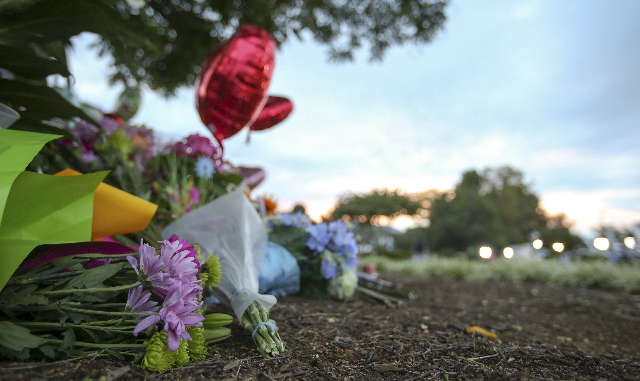 Flowers are seen at a memorial outside of the offices for WDBJ7 where killed journalists Alison Parker and Adam Warm worked in Roanoke, Virginia August 27, 2015. REUTERS/Chris Keane 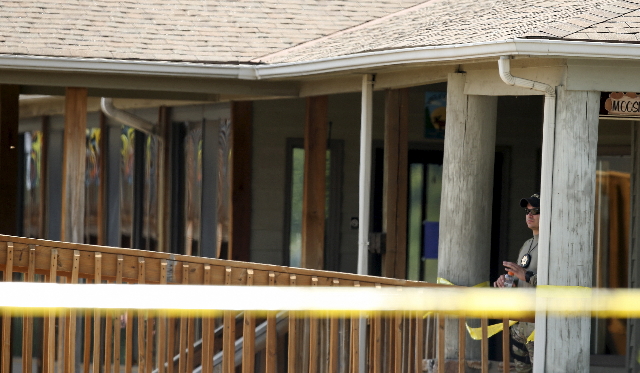 A law enforcement officer is seen outside of the Bridgewater Plaza in Moneta, Virginia, August 26, 2015. REUTERS/Chris Keane 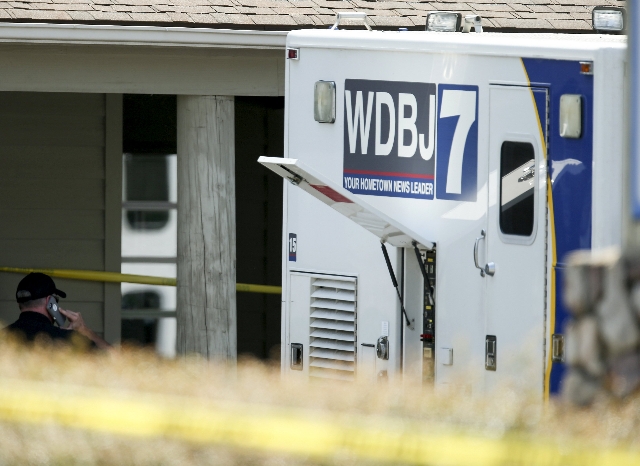 The WDBJ7 live truck is seen outside of the Bridgewater Plaza in Moneta, Virginia, August 26, 2015. REUTERS/Chris Keane 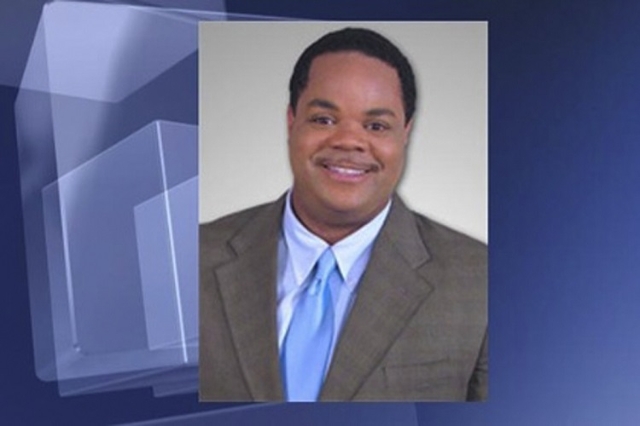 Vester Lee Flanagan, who was known on-air as Bryce Williams is shown in this handout photo from TV station WDBJ7 obtained by Reuters August 26, 2015. REUTERS/WDBJ7/Handout via Reuters 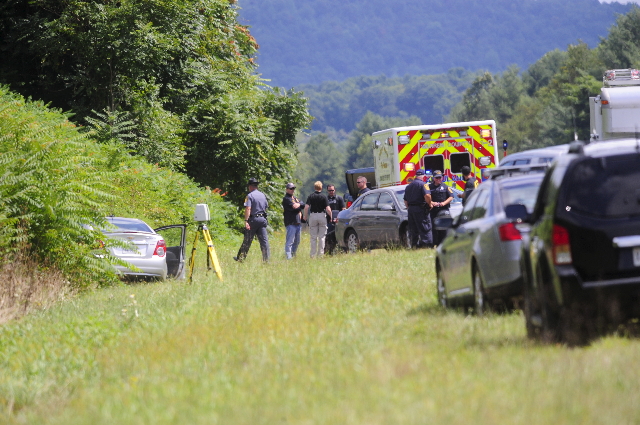 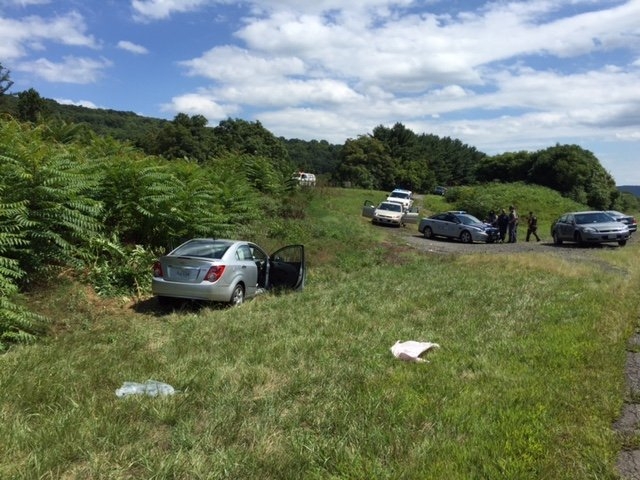 Virginia State Police provided this photograph of a Chevrolet Sonic along Interstate 66 in Northern Virginia that was driven by Vester Lee Flanagan on August 26, 2015. Flanagan shot and killed WDBJ reporter Alison Parker and photographer Adam Ward in Moneta, Virginia earlier in the day and crashed the vehicle in Fauquier County, more than 170 miles away from the scene of the shooting.

He carefully choreographed the slaying of the two journalists for maximum shock value. And, judging from the items found in his car, he took equally meticulous steps to get away with it.

But a text message to a friend may have been Vester Lee Flanagan‘s undoing.

Later, clues were found inside the rental car Flanagan used for his getaway, a Chevrolet Sonic.

Inside the subcompact four-door sedan — a far cry from his usual ride, a 2009 Ford Mustang — police found a wig, a black hat, a shawl, sunglasses and a to-do list. Police also found three license plates inside.

And the use of a rental car was no last-minute decision by Flanagan. He rented it weeks before the shooting.

Despite the careful planning by Flanagan, it appears he helped tip off authorities, at least indirectly.

The tidbit of information is in an affidavit for the search warrant.

“Through the course of investigation, investigators identified (Vester) Lee Flanagan II as a person of interest based upon a text message to a friend making reference to having done something stupid,” the document said.

What police did with the information isn’t spelled out, but the text would have given them Flanagan’s cell phone number, and with it they could have tracked his signal.

A trooper tried to pull Flanagan over, police said, but he refused to stop and sped away before running off the road and crashing into an embankment.

Troopers found Flanagan inside with a self-inflicted gunshot wound. The cause of death was a gunshot wound to the head, officials said.

Investigators believe Flanagan had a specific location he was going to following the shooting, but they’re still investigating where, according to Lt. Phillip Young, a spokesman for the Franklin County Sheriff’s Office.

Authorities are looking at whether Flanagan used the belongings found in his car to disguise himself before the shootings or as part of a potential getaway plan.

Parker and Ward suffered gunshot wounds to the head, the Roanoke office of the chief medical examiner said Friday. Parker was also shot in the chest, Adam in the torso. The manner of death for both was homicide. Officials would not say how many shots were fired.

Video later posted to social media sites belonging to Flanagan shows the gunman approaching Parker and photographer Ward as the reporter conducted a routine interview for a local story.

Ward’s back is to the gunman. Parker is in profile, and the interviewee is facing the gunman. The shooter appears to take his time aiming the gun, presenting it and then withdrawing it, before composing the angle of his video.

He opens fire on Parker first. Both Parker and the interview subject scream, and the reporter is seen running away. It’s unclear if she had been wounded at that point.

Ward’s camera managed briefly to capture the shooter pointing the gun down at him.

The warning signs about Flanagan stretch back at least as far as 2000, 12 years before he was hired at — and fired from — WDBJ, the Roanoke TV station where Parker and Ward worked. In incident after incident, Flanagan’s deeply troubled mental state was on full display.

• In 2000, he was fired from WTWC in Tallahassee, Florida. The station said it was for “poor performance,” “misbehavior with regards to co-workers” and his “use of profanity on the premises.” Flanagan alleged a producer called him a “monkey,” and because he complained, the station retaliated. “He was very angry and troubled by a lot of things that had happened to him at work,” said Marie Mattox, the attorney who represented him in a suit he filed against the station. “And I was concerned about just his mental status and whether he needed counseling.”

CNN couldn’t find any indication that he did. (The suit was settled).

• Flanagan bounced around to a number of news stations, landing at WDBJ in Virginia in 2012. There, he had run-ins with co-workers and was a poor performer, leading his bosses to refer him to the company’s employee assistance program.

The final warning for the reporter came in December 2012, and he was fired in February 2013. Before police walked him out of the building, Flanagan handed his manager a small wooden cross and said, “You’ll need this.”

• Earlier this summer, Flanagan was involved in a road rage incident. Brandon Foster posted the video of the July 6 encounter on YouTube after Wednesday’s shooting. “I called this man out at a red light for driving like a maniac,” Foster said. “He then followed me to my destination driving recklessly, and stopping traffic to continue the argument.” There was no violence, and no charges were filed.

• After the shooting Wednesday, Flanagan sent a disjointed 23-page fax to ABC News chronicling, what be perceived as, grievances dating all the way back to first grade. He said he had been targeted his whole life by white females and black males. He cited seemingly innocuous comments as discriminatory, such as “an intern asking where I would ‘swing by’ for lunch.”

“The average person would not perceive those everyday comments as insulting or injustices,” said Mary Ellen O’Toole, a former FBI profiler. “But clearly, he does. His belief system is so rigid that there’d be no way you’d get through to him. No way.”

But all of those things come in hindsight.

No one, it appears, thought that Flanagan would go to the terrible length he did this week. No one picked up on what he said he felt — that he was a human powder keg “just waiting to go boom.”

After the shootings, WDBJ executives struggled to say what they could have done differently with the troubled employee.

“There were probably things we can do,” Marks said. “We can probably screen more, but by and large we get great employees here. One is going to slip through the cracks every now and then.”

On Friday, Virginia Gov. Terry McAuliffe visited WDBJ to meet with colleagues and family members of the slain journalists. Outside the station, McAuliffe told reporters of plans to introduce tougher gun control legislation.

Parker’s father, Andy, said he will make the pursuit of gun control measures his mission.

Parker told CNN’s Anderson Cooper on Thursday night he will honor his daughter’s memory by lobbying for laws that will make it harder for the mentally ill to purchase firearms. It was not clear whether Flanagan had been diagnosed with a mental illness. Police recovered two guns from Flanagan, Glock 9 mm pistols he purchased legally.

“After Sandy Hook (the school), and the theater shootings, everybody thought, gosh this is terrible,” he said. “We have got to do something to keep people that are mentally disturbed, we got to keep them away from guns and having the ability to get guns.”