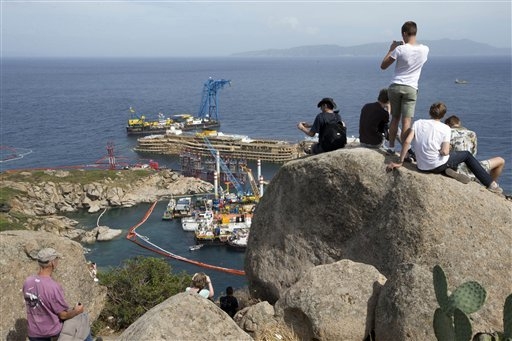 In this photo taken on Monday, Sept. 16, 2013 people take pictures of the Costa Concordia ship, on the Tuscan Island of Giglio, Italy, Wednesday, Sept. 18, 2013. For more than a year, tourists flocked to this island off the Tuscan coast to gawk at the giant cruise ship lying on its side just outside the tiny harbor. Now that the shipwrecked luxury liner has been set upright in a daring engineering feat, the realization is sinking in for islanders in that the Costa Concordia will eventually be towed away, that hundreds of salvage workers who patronized Giglio's bars, trattorie and lodgings will leave, too, and that day-trippers who came on ferries to marvel at the vessel's dramatic profile no longer will have that attraction. (AP Photo/Andrew Medichini)

The search for the remains of an Italian female passenger and an Indian waiter resumed after the capsized luxury liner was rotated upright last week in an unprecedented marine salvage operation 20 months after it crashed into a reef off Giglio Island.

Civil Protection chief Franco Gabrielli told reporters he had immediately notified the victims’ relatives, who had traveled to the island in hopes their loved ones’ remains could be found.

Coast Guard and Customs Service divers located the remains near the central part of the ship, where survivors had said the two were last seen.

Specialized police divers were going into the sea to remove the remains, which will be examined by forensic experts on the mainland in Tuscany. DNA testing could take a few days, authorities said.

The side of the ship where the remains were found is badly smashed in after lying submerged since it capsized on Jan. 13, 2012.

Experts plan to go inside the ship, retrieve some of the Concordia’s computers, and try to determine why backup generators and some other equipment failed to work immediately after the collision.

The Concordia’s captain, Francesco Schettino, is on trial for alleged manslaughter, causing the shipwreck and abandoning ship during a confused and delayed evacuation. Prosecutors contend he deliberately went off the route, bringing the ship too close to Giglio’s rocky coastline at night. The captain, who risks 20 years in prison, contends that the reef wasn’t on the ship’s nautical charts.

In separate proceedings, five other employees of the Italian cruise company, Costa Concordia SpA, were allowed to make plea bargains in exchange for lenient sentences. But a Florence prosecutor this week challenged those sentences, and Italy’s highest criminal court will eventually rule on that.