For Navajo Nation, COVID is yet another challenge for survival

Months into the pandemic, vulnerable medical practitioners have witnessed the deadly toll of the virus on the reservation
Video, story and photographs by Mackenzie Behm
Las Vegas Review-Journal

As Jeneda Benally crouches, the corn stalks peek over her tiny frame. She gently shakes the leaves, watching their golden dust float down into her silver dish.

The corn pollen that she collects in one of her gardens will later be used in prayer or as a blessing. In the Diné or Navajo culture, it is a tradition that has been passed down thousands of years.

She has been a traditional medicine apprentice to her father, Jones Benally, for about 40 years. Jones, who is in his early 90s, is one of the few remaining medicine men in the Navajo Nation.

This day in Flagstaff, AZ, part of the ancestral homeland to the Navajo people, is like many days for Jeneda and her tight-knit family. They have strictly quarantined away from surrounding communities that often don’t follow mask or distancing protocols. 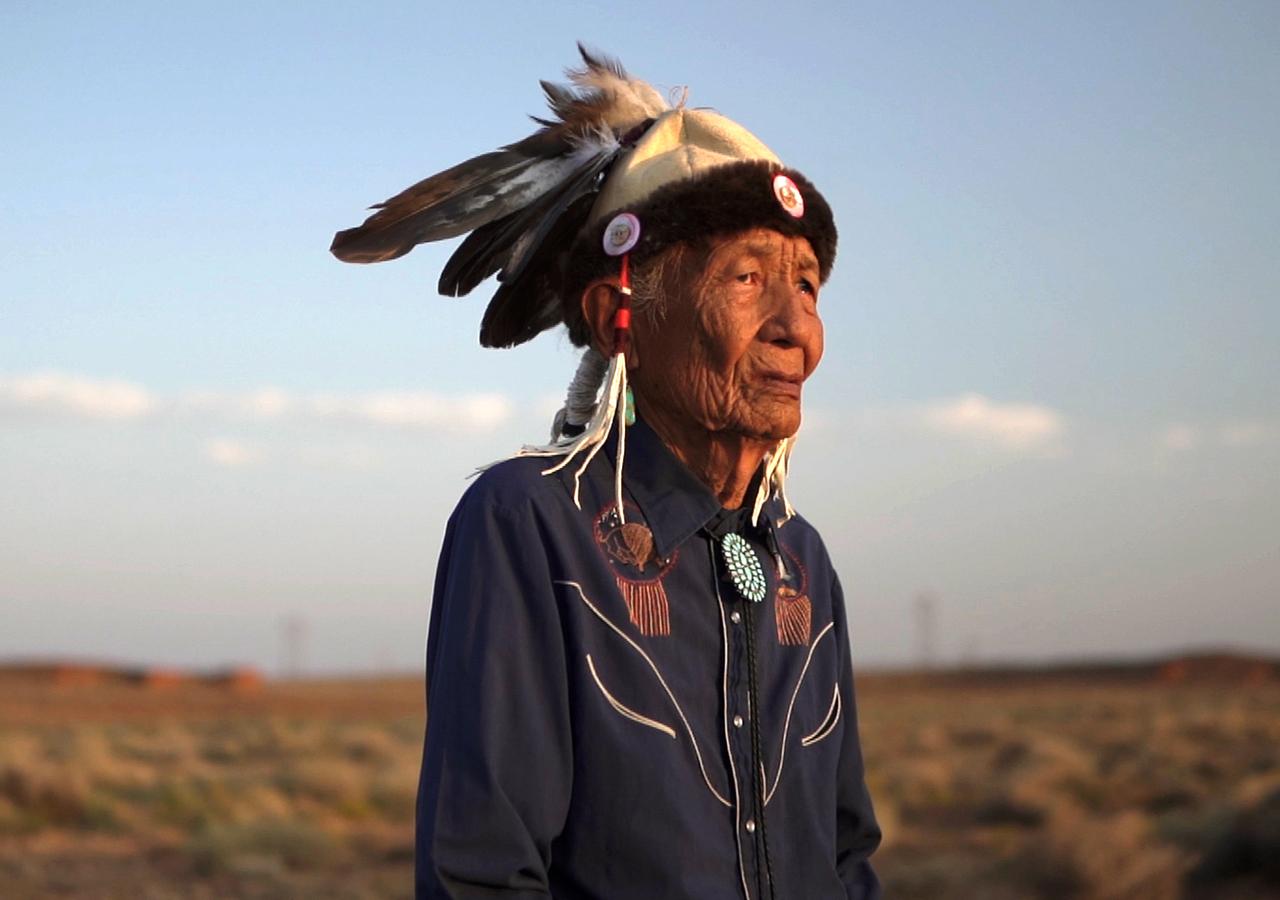 Jones Benally, early 90s, is a traditional Navajo medicine man. He is recognized by the state of Arizona as a "Arizona Indian Living Treasure," and was among the first traditional medical practitioners to work at a Western medicine facility. (Mackenzie Behm/Las Vegas Review-Journal)
2 / 4 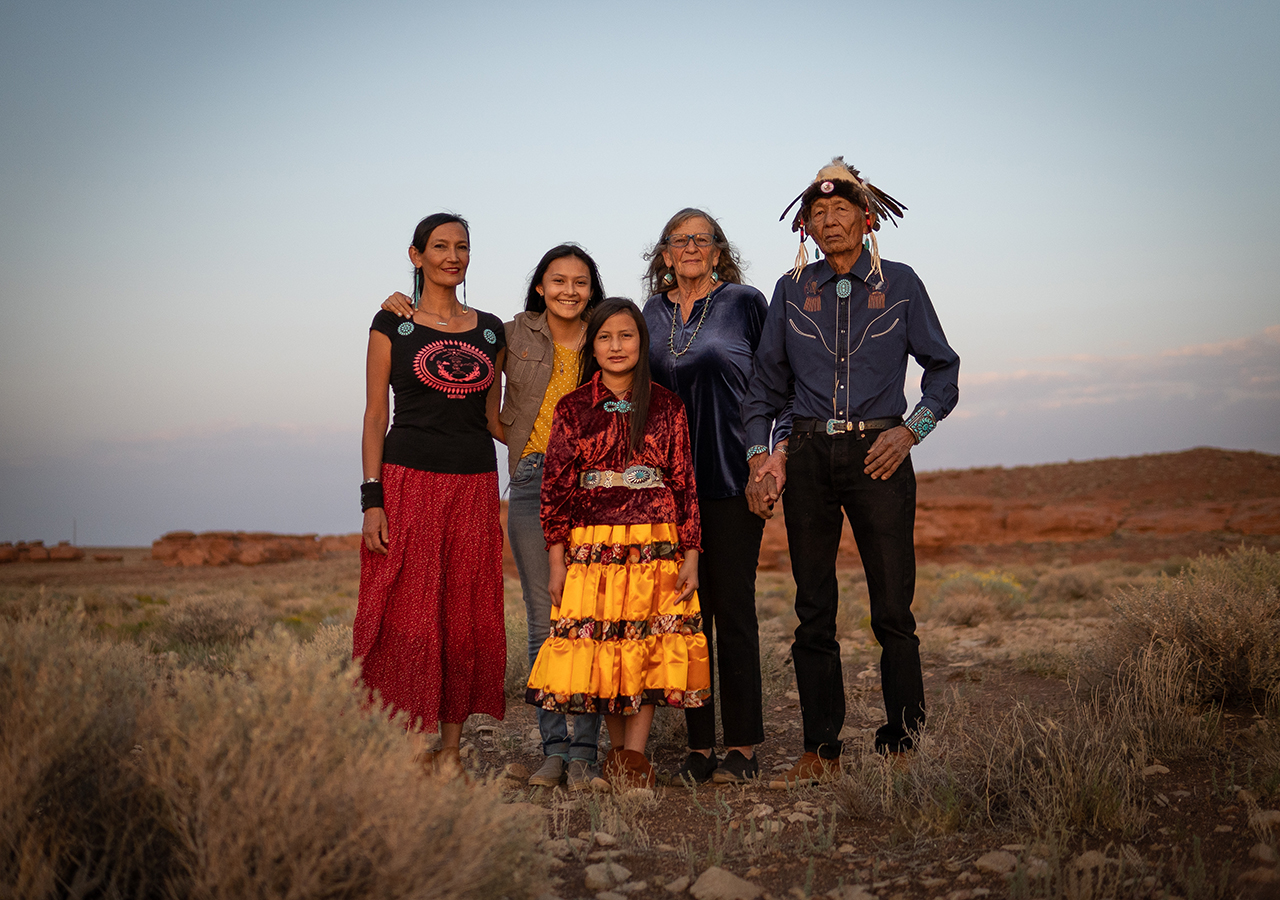 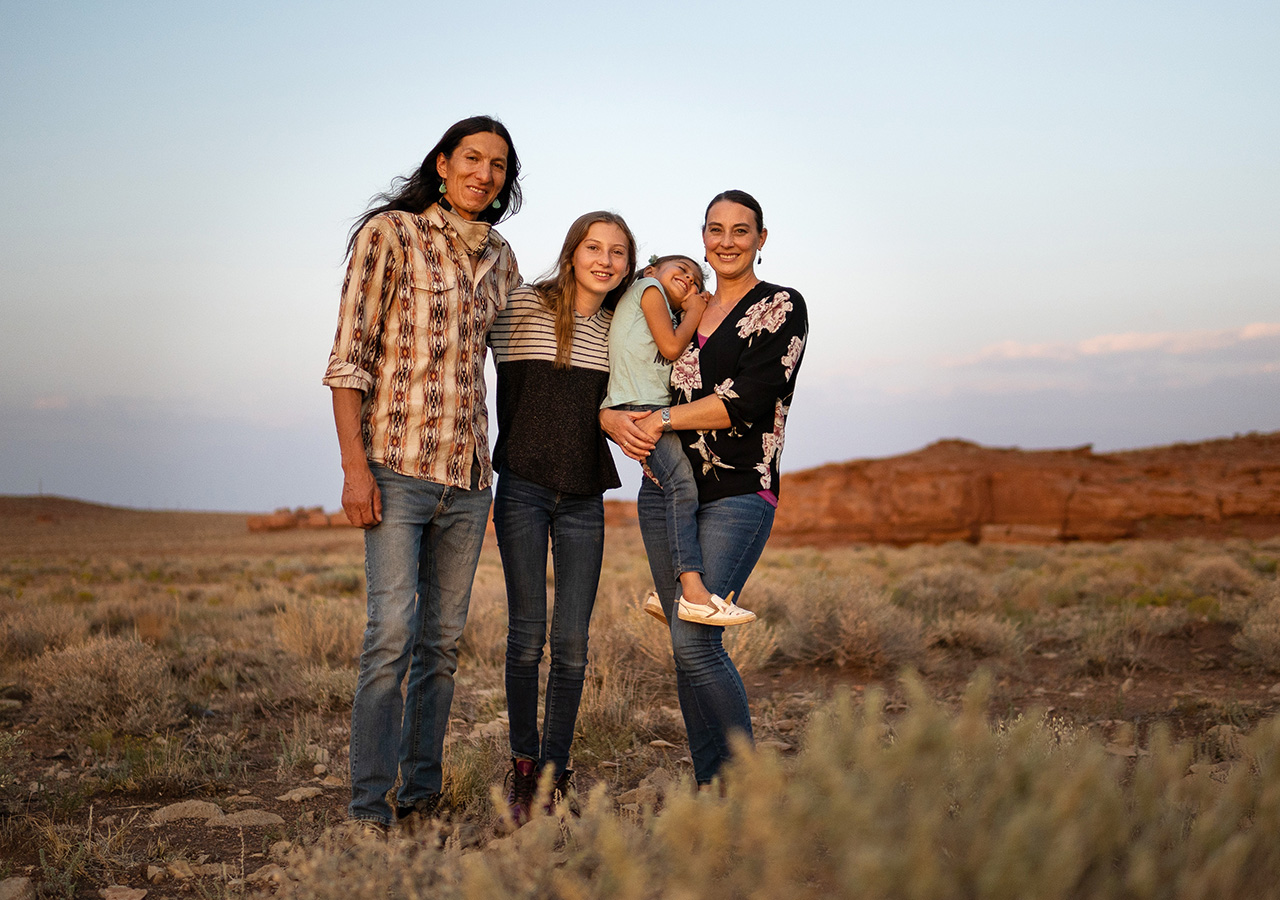 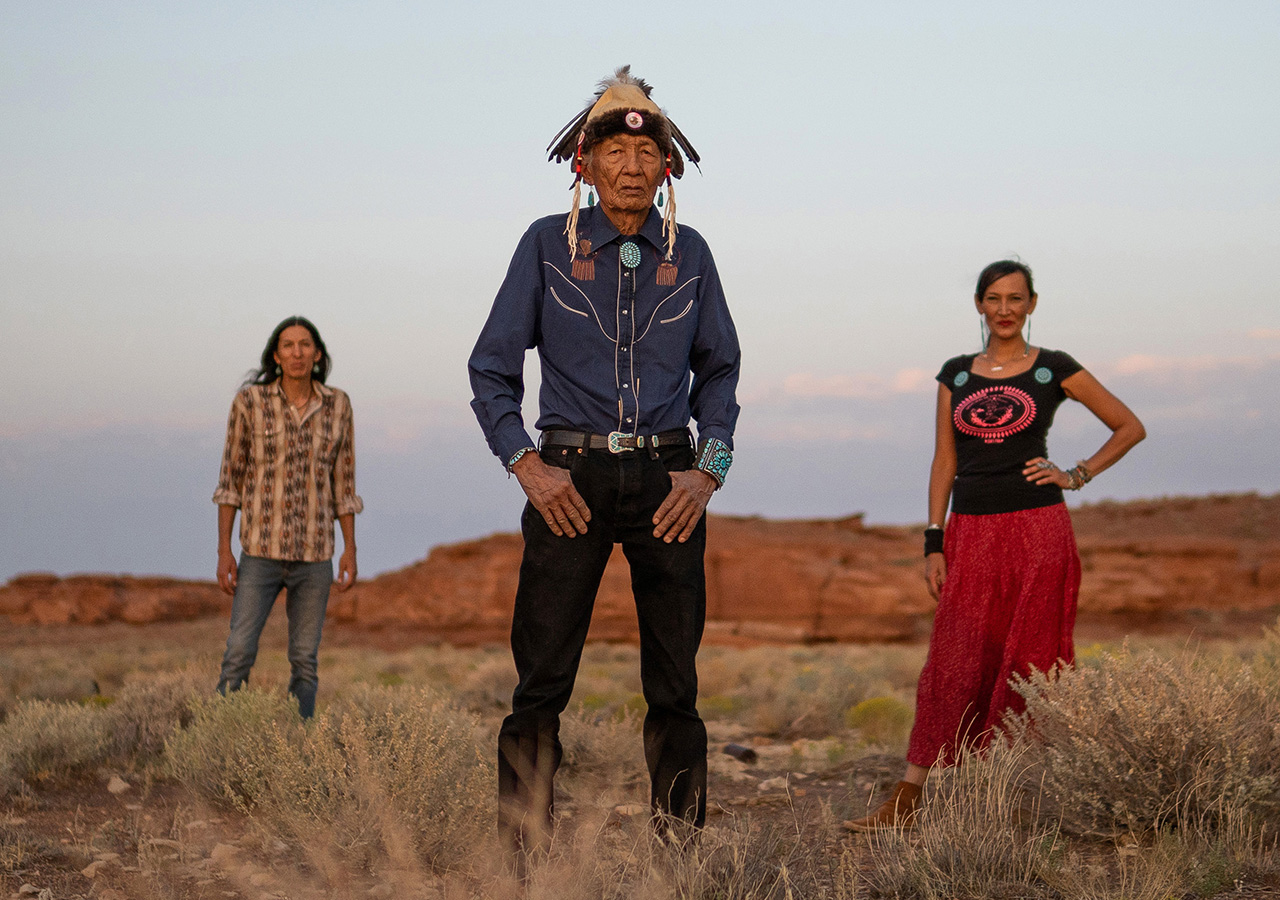 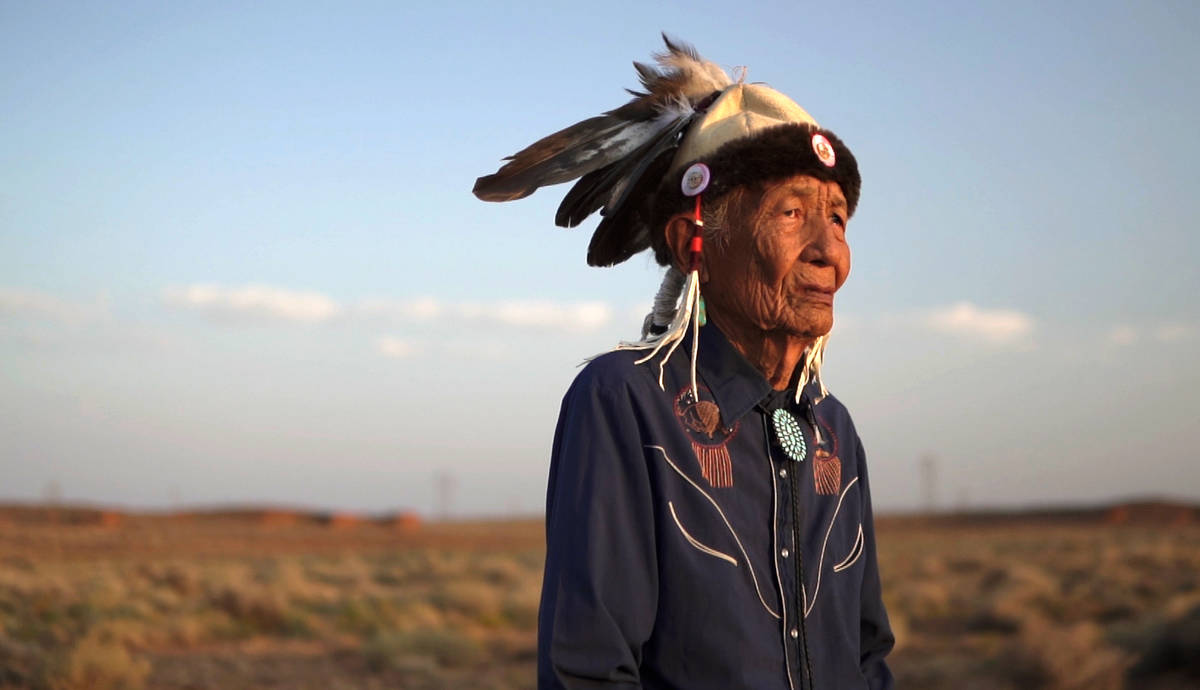 Jones Benally, early 90s, is a traditional Navajo medicine man. He is recognized by the state of Arizona as a "Arizona Indian Living Treasure," and was among the first traditional medical practitioners to work at a Western medicine facility. (Mackenzie Behm/Las Vegas Review-Journal) 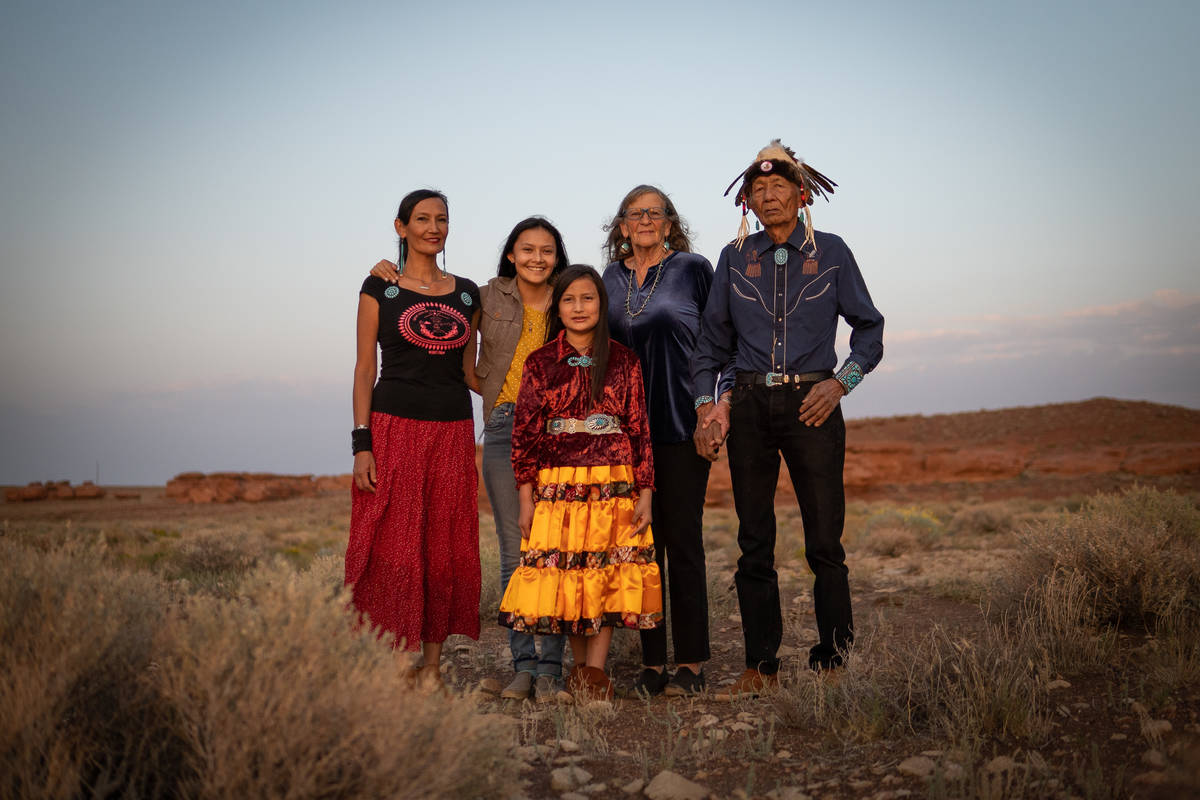 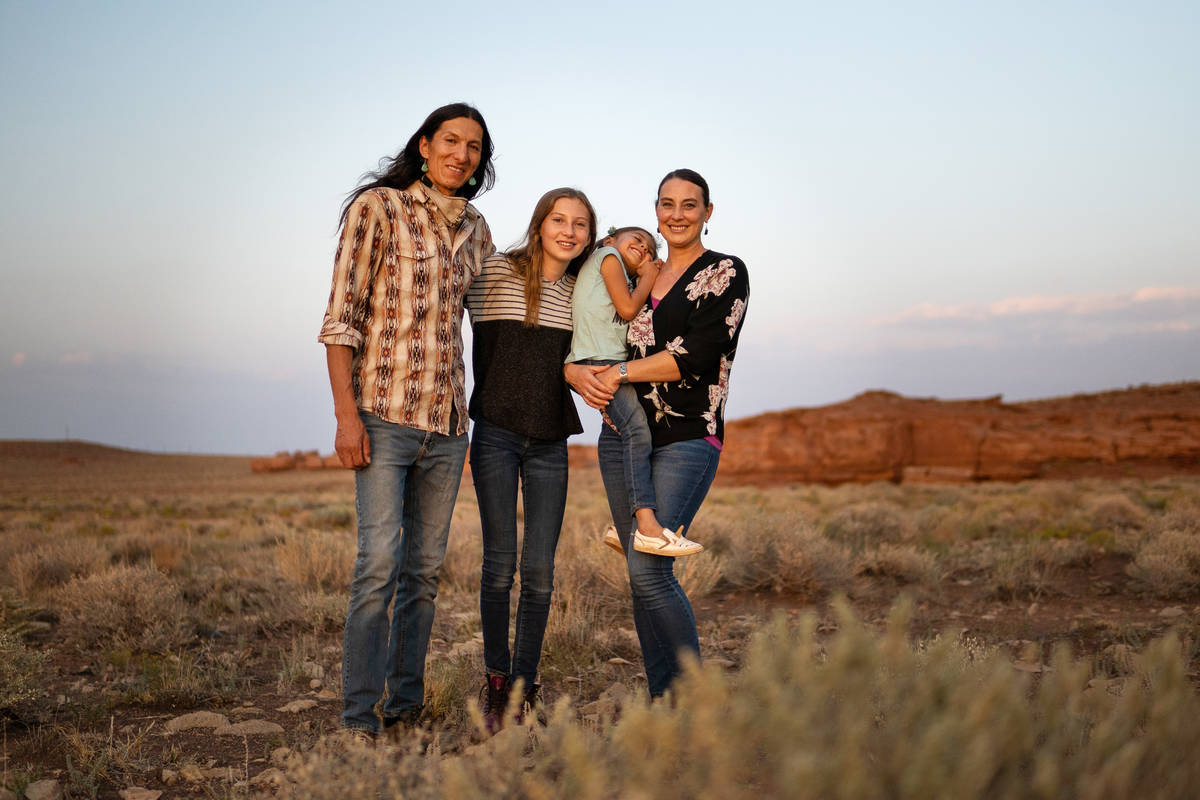 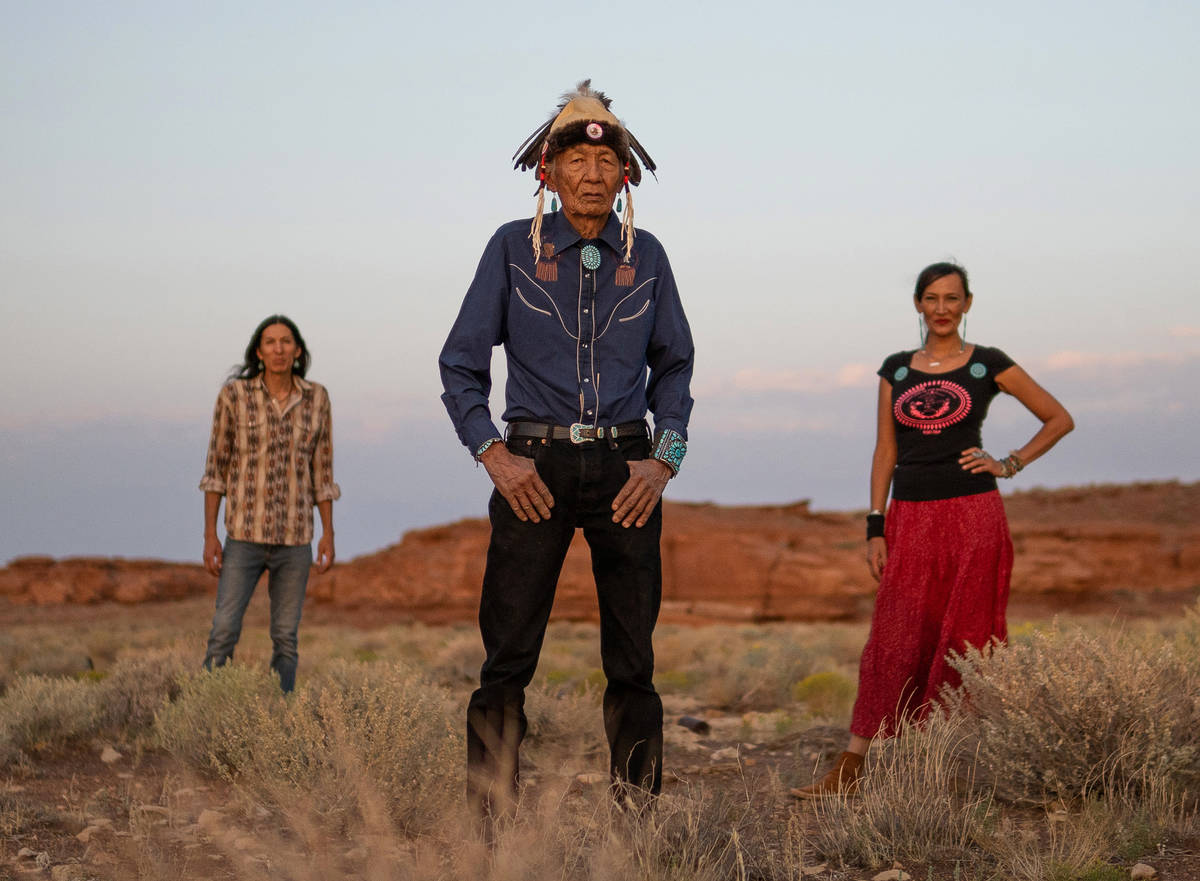 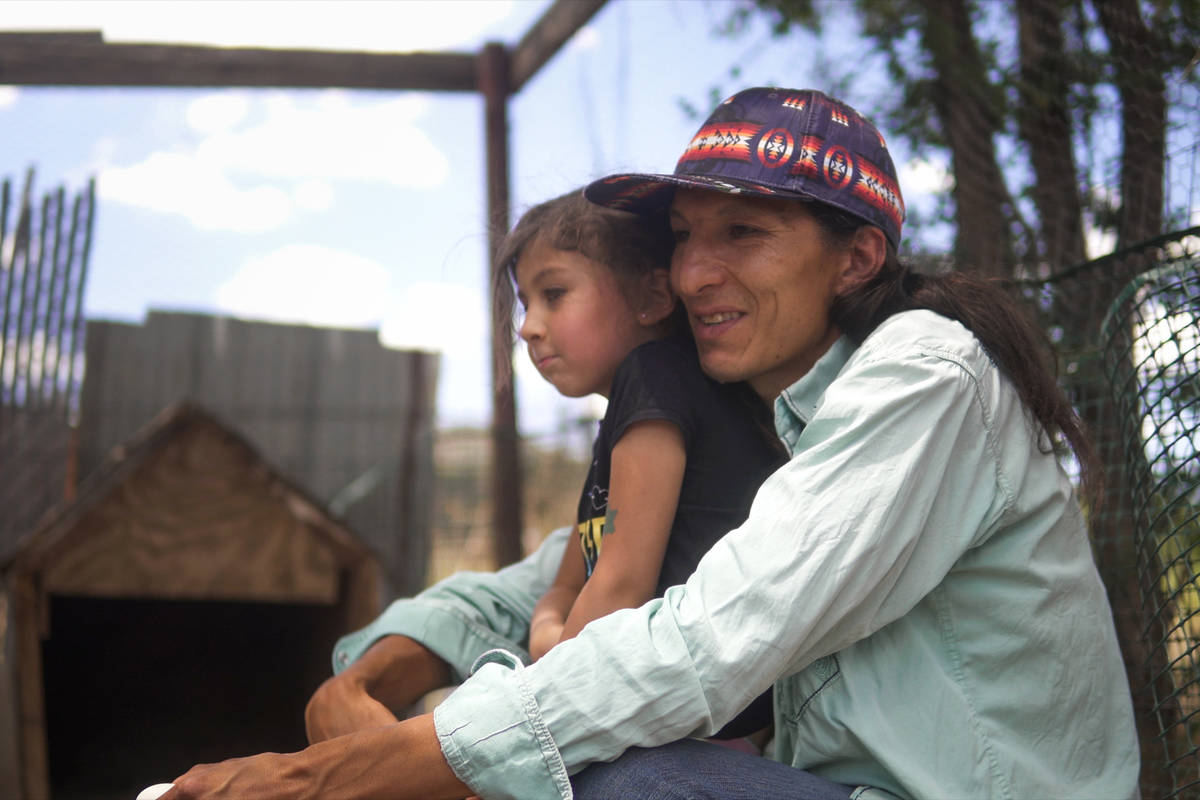 Clayson Benally cuddles with his daughter Zonnie after feeding their chickens on July 29, 2020, in Flagstaff, AZ. (Mackenzie Behm/Las Vegas Review-Journal) 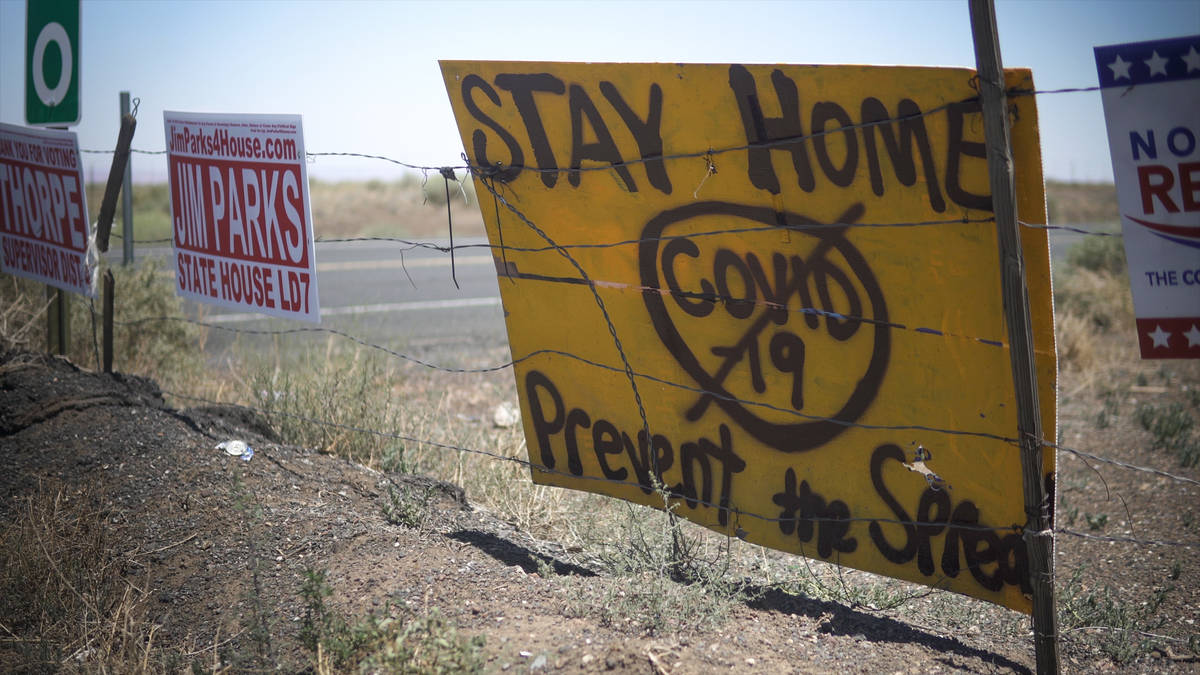 Makeshift, spray-painted signs at the entrance of the Navajo reservation warn visitors and Navajo people to stay home during COVID-19. Navajo Nation has seen some of the highest per capita rates of the virus. (Mackenzie Behm/Las Vegas Review-Journal) 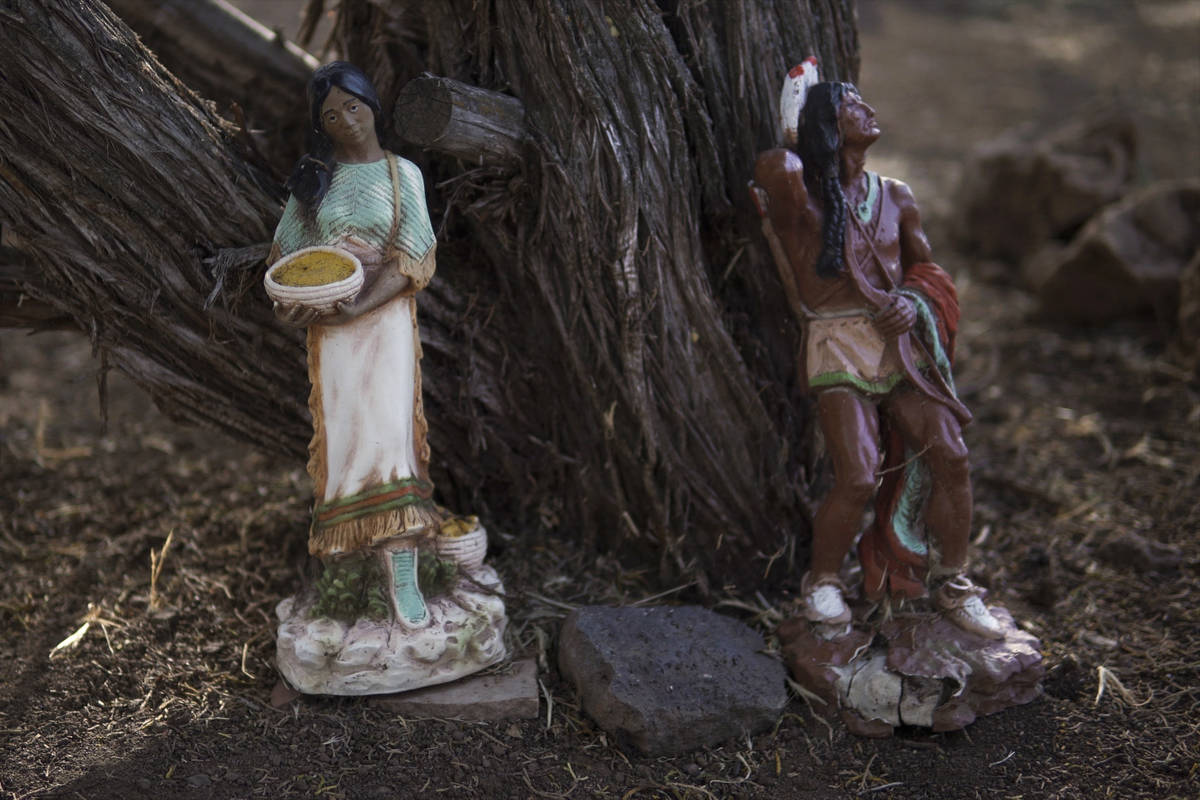 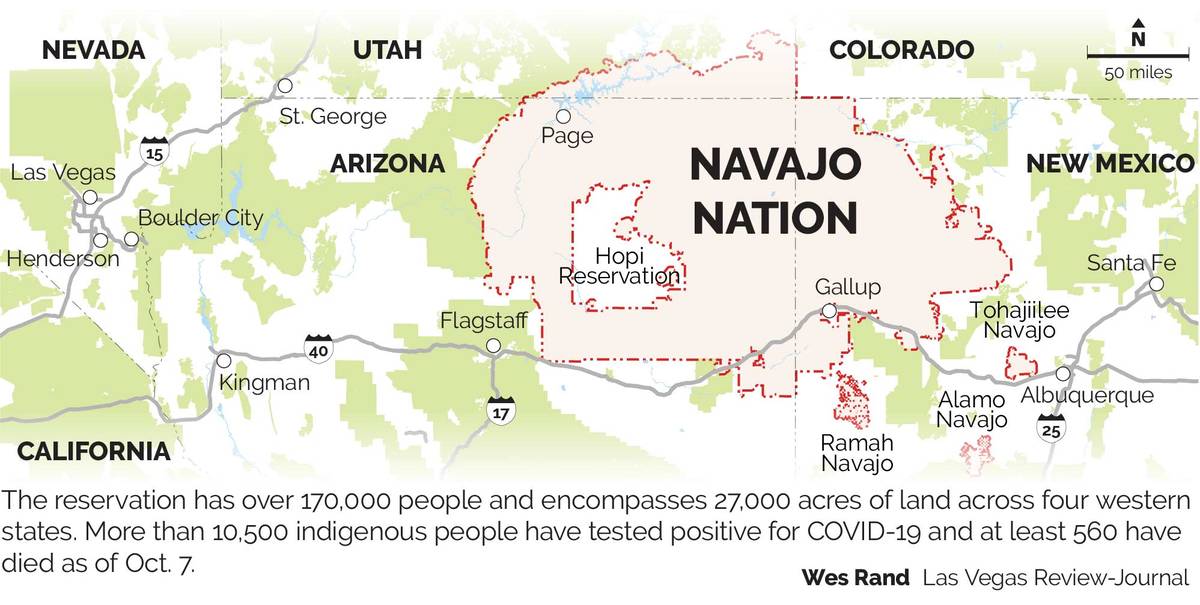 Roughly nine months into the COVID-19 pandemic, both Benally medical practitioners have witnessed the deadly toll of the virus on the Navajo Nation reservation, which has over 170,000 people and encompasses 27,000 acres of land across four Western states.

Medicine men and women were already scarce, with only 300 left in the Navajo Nation.

Since COVID-19 hit, it has made them even more vulnerable.

It has disproportionately affected the indigenous Diné people. They had seen some of the highest per capita rates of the virus in the U.S. back in August.

It’s the latest challenge to hit a population already dealing with water shortages and pollution, climate change and land disputes over sacred sites, all of which impact longstanding Navajo medicine subsistence.

More than 10,500 have tested positive for the coronavirus and at least 560 have died. Because of a recent surge in cases, the reservation has enacted weekend curfews to curb the spread, according to the Navajo Department of Health.

Jeneda acts as a fearless matriarch, a protector of the home. The importance of ensuring her family is safe is not lost on her.

The front of the house is marked by a crate that warns not to come to the porch. A wooden table in the front yard serves as a routine sanitizing station for anything that comes in or out the house.

Her fruits are washed with bleach, and if she orders pizza, she re-cooks it in the oven to kill any particle of virus that could be here.

“Please stay back!” she said she would squeal at sick patients that would show up at their home. But she worries most about her father, who is a workhorse even at 94.

She secretly unplugs his car battery to stop him from treating patients or going anywhere that would jeopardize his health.

“Dad, put on your mask,” she reminds him.

It took Jeneda and Jones until August 2020 to start treating patients again during COVID-19, but it doesn’t happen as frequently as before.

They found there are particular ceremonies that can be done with a lot of preparation and planning, 20 feet apart.

That concept is very different for us. Normally when you are helping someone, that patient comes to you. You sit with the patient, you diagnose the patient, and you go through a process. So for us, I feel like we’ve had to kind of compromise in a way.

A large part of how they’ve been treating their patients with traditional medicine is through knowledge passed down from their grandmother, Zonnie Benally, who used Native medicine to survive the 1918 flu pandemic.

Apart from ceremonies Jeneda has been tracking down people on Facebook she knows who have contracted COVID-19 and mailed out herbal bundles to them.

“That concept is very different for us. Normally when you are helping someone, that patient comes to you. You sit with the patient, you diagnose the patient, and you go through a process. So for us, I feel like we’ve had to kind of compromise in a way,” Jeneda said.

She collects the herbs for healing on medicine walks with her family and friends. Socially-distanced, of course.

If a person were to count the lines in a medicine man or woman’s face, they’d understand the time it takes to become a Diné medicine practioner. It takes an entire lifetime to learn and earn the trust of the community.

As a child, Clayson, Jeneda’s brother, had issues with his intestines. He said he remembers being amazed as he watched traditional medical practitioners perform a non-invasive procedure on him.

Just using their hands, they pressed into his skin and manipulated his organs around to resolve the issue, he said.

Medicine ceremonies typically consist of prayer, songs and herb remedies. It can be very complicated to learn all the various ceremonies and medicines needed because there are countless ways to make use of one plant and delicate ways to harvest it.

To preserve and protect their people, the ceremonies and herbs that the Navajo Nation medicine men use are kept secret.

“Lots of [medicine men and women] don’t speak English and only pass this information on orally. These are sacred, valued traditions that aren’t just given away to anybody,” Clayson Benally said.

“People that are sick and infected initially went to seek help and treatment from our practitioners,” Clayson said. “But don’t just go and run to a practitioner because you’re going to spread that illness to that individual that has that knowledge … and that’s exactly what happened in the initial onset. And many practitioners have perished subsequently.”

At a young age, the Navajo people are taught that if you find a pottery shard in the ground left by your ancestors, you leave it there.

On this late afternoon in Flagstaff, Jeneda and her family do exactly that. They find a black-and-white checkered piece nestled in the dirt where they collect medicine.

They point it out, tell the children in the group not to take it, and move on.

The Benally family feels that preservation like this has kept their people and culture alive.

Traces of their ancestry are everywhere, through the pottery pieces in the ground to the medicinal remedies they pick that date back centuries.

But don’t just go and run to a practitioner because you’re going to spread that illness to that individual that has that knowledge… And that’s exactly what happened in the initial onset. And many practitioners have perished subsequently.

They quietly weave their way through the forest and find a log to gather around. Jones Benally, the medicine man, begins a speech.

“Traditional people are getting smaller,” he said. He tells a story about a time when Western medicine couldn’t fix an ailment on his neck, but how eventually the power of traditional medicine could.

The kids start yawning and rustling around. Jeneda wraps up the speech. “Everything that we experience in life, the sicknesses, the diseases, the imbalances, all the solutions are here,” she proclaims.

She stands up powerfully, cradling her medicine collection tray under her arm. It’s clear she is referencing more than the current virus.

The Benally family feels the pandemic has only added to a history of disparities the Navajo Nation has endured. The lack of running water in Black Mesa further exposes them to infection, since the reservation has to share community pumps and makes hand-washing difficult.

Water scarcity has been ongoing, due to extended drought conditions and in part to Peabody Energy’s decades of water extraction from reservation aquifers to help power coal operations. Family members said they haven’t seen the water come back the way it was when Jones Benally was young.

Even other sources of water, from places like the Colorado River or the San Francisco Peaks have been polluted, they claim, making them unusable.

The people that hold the water that are in charge of water, that own the water, have the power. We see communities that don’t have any running water and we see how they are oppressed.

“It’s kind of further left, damaging scars that … we’re kind of the perfect victim for this COVID-19 crisis,” Clayson said.

“The people that hold the water that are in charge of water, that own the water, have the power. We see communities that don’t have any running water and we see how they are oppressed,” Jeneda said.

Diné people have a saying, Tó éí ííńá át’é, which translates to water is life. The negative impacts on water have been devastating to the Diné people because it is considered sacred, and it is often used for medicinal ceremonies.

The Benally family sued the U.S. Forest Service in 2010 for putting reclaimed wastewater for the Arizona Snowbowl on the San Francisco Peaks, where Navajo people collect plants and herbs for medicine.

They lost the lawsuit, but Jeneda remains optimistic. She doesn’t see the disparities Navajo people face as problems, but rather as pathways for solutions.

“ Our indigenous people… have survived so many different traumas and we’re still here,” she said.

Part of the beauty of their culture is the way they are resilient enough to exist despite countless atrocities and disparities they have faced throughout time.

Jeneda said, “I feel that so much of the narrative has been erased from history, but not our story.”