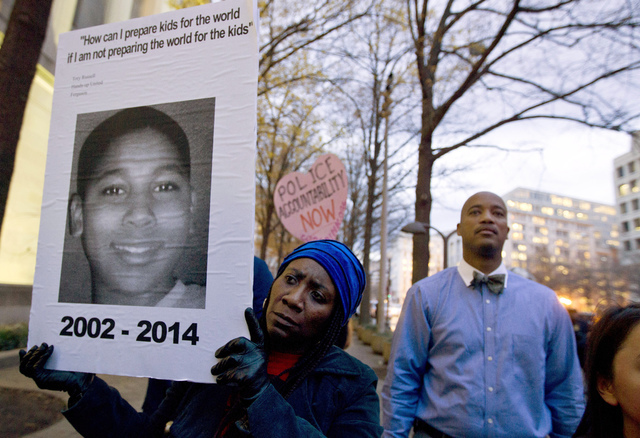 In a Monday, Dec. 1, 2014 file photo, Tomiko Shine holds up a picture of Tamir Rice during a protest in Washington, D.C. The gazebo where the 12-year-old boy, Rice, was fatally shot by a Cleveland police officer is scheduled to be disassembled. A spokesman for the Stony Island Arts Bank says the shingles will be removed on Wednesday, Sept. 14, 2016, with work continuing into next week. (AP Photo/Jose Luis Magana, File)

CLEVELAND — Workers have begun dismantling the gazebo where 12-year-old Tamir Rice was fatally shot by a Cleveland police officer.

A Chicago arts organization is planning to display the gazebo where the black boy was killed by a white officer while playing with a pellet gun in November 2014. It became a makeshift memorial to Tamir.

Crews on Wednesday morning removed concrete picnic tables by the gazebo at a recreation center on Cleveland’s west side. They also took off some shingles from the roof, with additional dismantling scheduled for later in the day.

The structure has become a symbol for a protest movement over the killings of black men by police.

The Tamir Rice Foundation is finalizing an agreement to loan the structure to Chicago’s Stony Island Arts Bank.

No indictment in shooting death of 12-year-old Tamir Rice