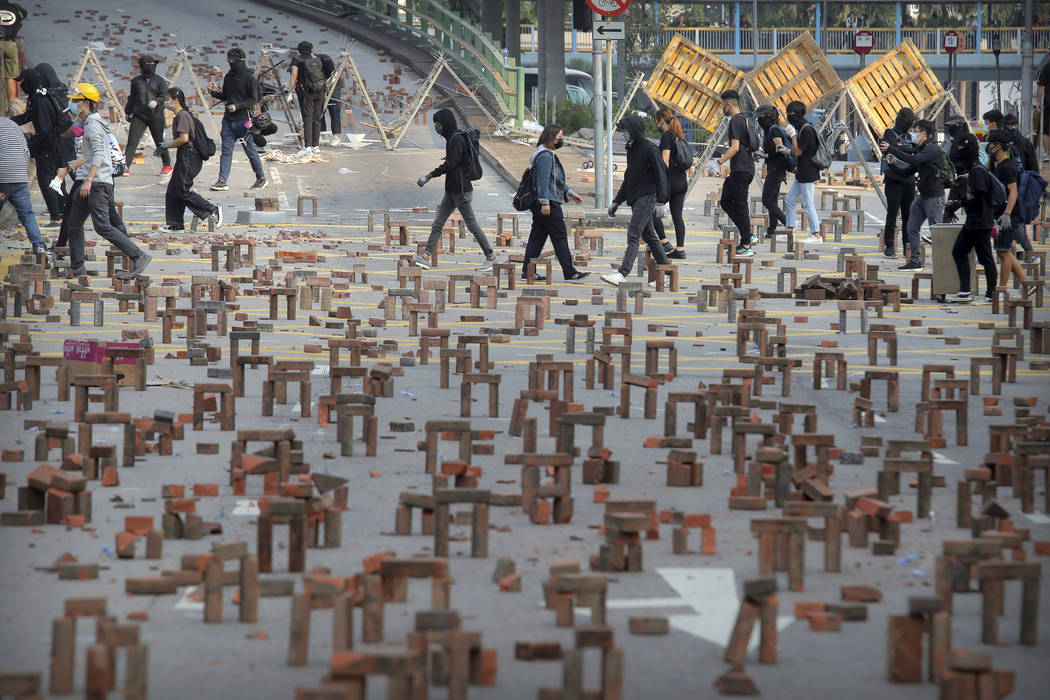 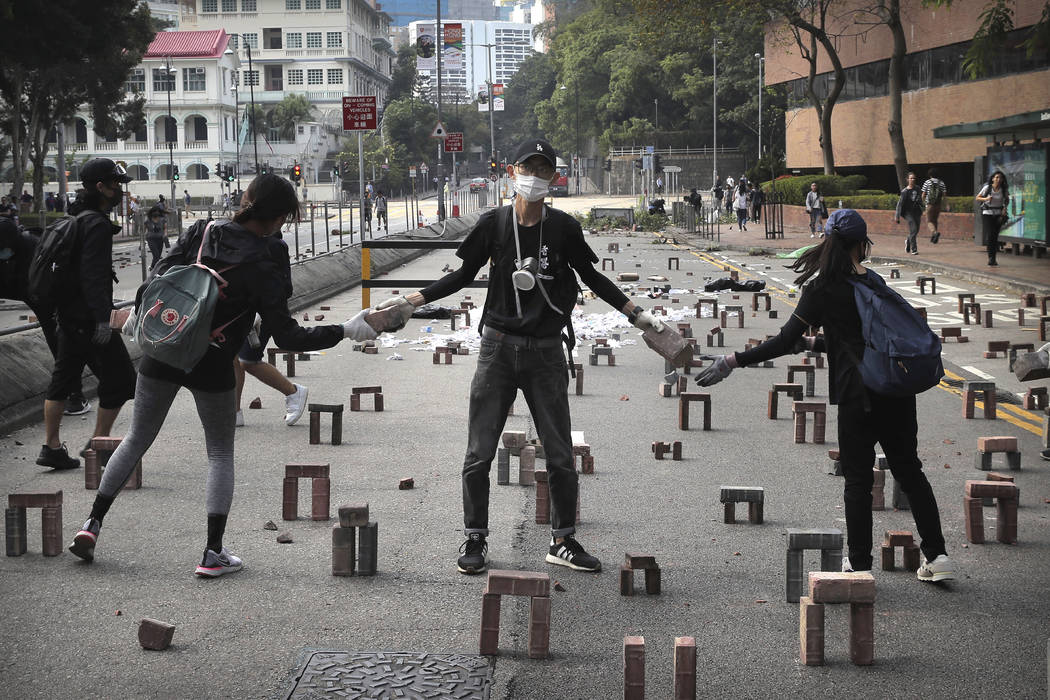 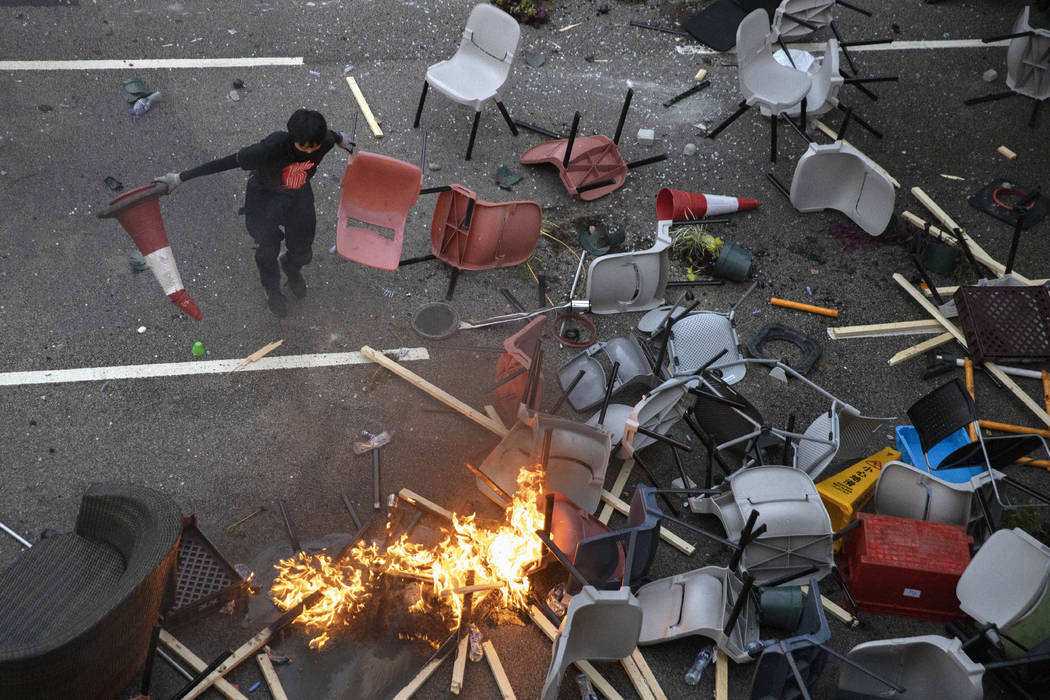 A protester tries remove plastic items from a fire burning amid debris placed to block a road leading to the Cross-Harbour Tunnel in Hong Kong, Thursday, Nov. 14, 2019. University students from mainland China and Taiwan are fleeing Hong Kong, while those from three Scandinavian countries have been moved or urged to leave as college campuses become the latest battleground in the city's 5-month-long anti-government unrest. (AP Photo/Ng Han Guan) 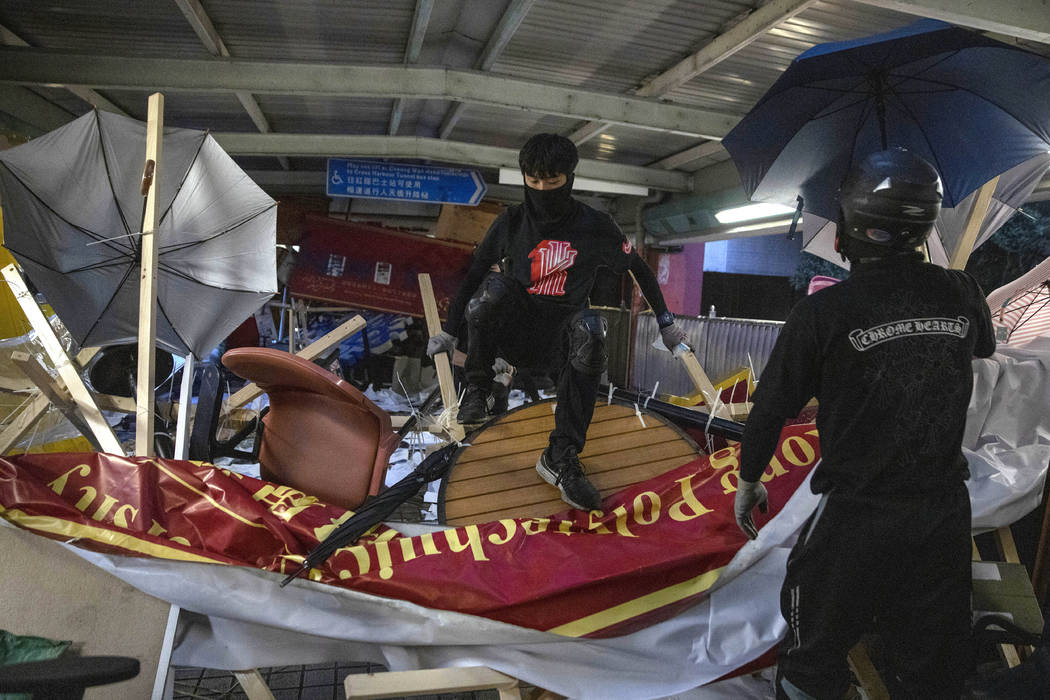 Protesters climb over a barricade on an overhead bridge near the Cross-Harbour Tunnel in Hong Kong, Thursday, Nov. 14, 2019. University students from mainland China and Taiwan are fleeing Hong Kong, while those from three Scandinavian countries have been moved or urged to leave as college campuses become the latest battleground in the city's 5-month-long anti-government unrest. (AP Photo/Ng Han Guan) 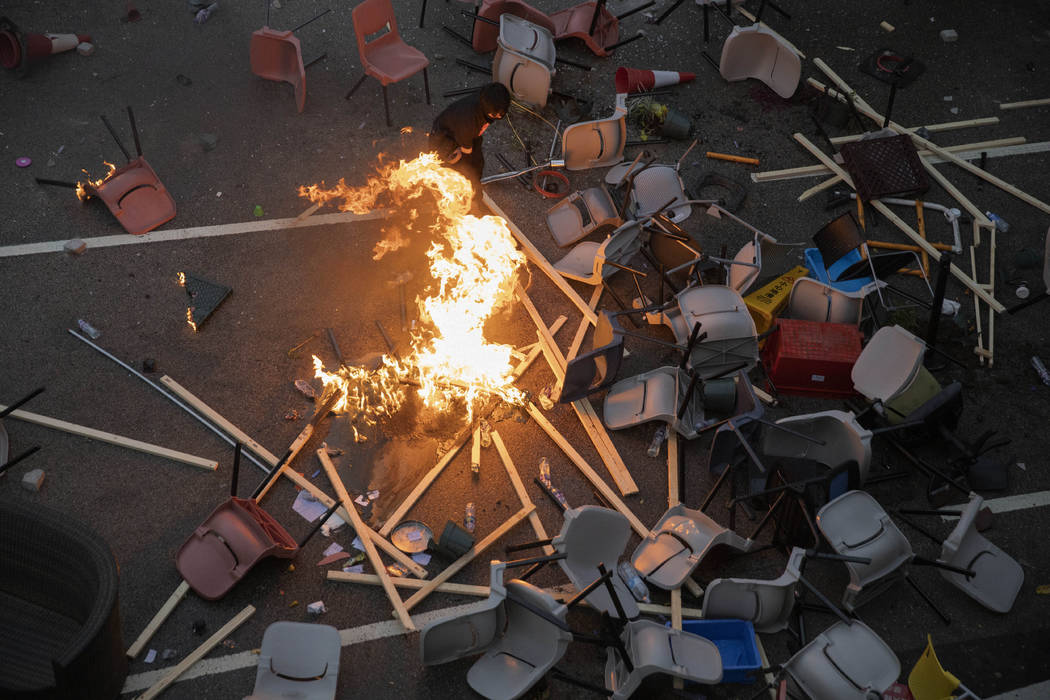 A protester tries to pour water on a fire burning amid debris placed to block a road leading to the Cross-Harbour Tunnel in Hong Kong, Thursday, Nov. 14, 2019. University students from mainland China and Taiwan are fleeing Hong Kong, while those from three Scandinavian countries have been moved or urged to leave as college campuses become the latest battleground in the city's 5-month-long anti-government unrest. (AP Photo/Ng Han Guan)

HONG KONG — Hong Kong police warned protesters on Thursday that they were moving “one step closer to terrorism” by sinking the city into chaos, as riot squads skirmished with militant students at major universities.

“We are aware of the relevant report circulating online,” Tse said at a daily briefing, referring to the report as “false.” He said the authority to order a curfew lies with Hong Kong’s leader, Chief Executive Carrie Lam, and “that’s why police are not in a position to comment.”

“The force is certainly capable and determined to control Hong Kong’s social unrest at the moment. We welcome any new measures that can help us to achieve the goal of restoring the public safety and order in Hong Kong,” Tse added.

In unusually harsh language, he said students were turning university campuses into “weapons factories” and a “hotbed” of crime.

“Their acts are another step closer to terrorism,” Tse said, warning of a major disaster if gasoline bombs stored on campuses were to catch fire.

He said violence that broke out this week at Chinese University of Hong Kong is spreading to other campuses “like a cancer cell,” mentioning specifically Hong Kong University and Baptist University.

“It’s time to wake up. No society can tolerate this much senseless violence,” he said.

With no end to the protests in sight, the beleaguered police force is appointing a group of prison guards as special constables.

Up to 100 officers from the Correctional Services Department who are already familiar with anti-riot equipment will be given additional training and deployed mainly to guard government premises.

“The ongoing riots over the past few months, with their massive scale, simultaneous occurrence in various districts and grave severity of violence, make it necessary to strengthen the support for the police’s front-line officers,” a statement from the police spokesman’s office said.

Police said protesters shot several arrows at them near Hong Kong Polytechnic University. No officers were injured, and six arrows were seized at the scene, police said.

Life in this city of 7.5 million has been strained as thousands of commuters have been unable to get to work or endured lengthy commutes.

The government appealed for employers to show flexibility. “For staff who cannot report for duty on time on account of conditions in road traffic or public transport services, employers should give due consideration to the circumstances,” a statement said.

A business and high-end retail district in the center of the city was once again taken over by protesters at lunchtime, as it has been every day since Monday. Office workers watched from the sidewalks and overpasses as protesters littered the streets with bricks and other items to block traffic and police.

At one point, a group of police swooped in and kicked the bricks to the curb along one major thoroughfare, but the standoff continued.

The Education Bureau extended the suspension of classes for kindergarten to high school students until Monday. It ordered schools to remain open, though, to handle children whose parents need to send them to school.

Protesters have hurled gasoline bombs and thrown objects off bridges onto roads below during clashes at campuses this week. The Chinese University of Hong Kong suspended classes for the rest of the year, and others asked students to switch to online learning.

Students at Chinese University, site of some of the fiercest clashes where students hurled more than 400 firebombs at police on Tuesday, have barricaded themselves in the suburban campus.

Early Thursday they used chainsaws to drop trees onto streets around the campus and prepared for a possible confrontation with police, who were not intervening.

A major rail line connecting Kowloon to mainland China was closed for a second day and five major underground stations were shut along with seven light rail routes, the Transport Department announced.

“Road-based transport services have been seriously affected this morning due to continued road blockages and damage to road facilities. In view of safety concerns and uncertain road conditions, buses can only provide limited services,” the department said.

One of the main cross-harbor tunnels connecting Hong Kong Island to Kowloon and the rest of the city was closed after protesters set some of the toll booths on fire Wednesday night.

Traffic was also disrupted because protesters have destroyed at least 240 traffic lights around the city.

Anti-government protests have riven Hong Kong, and divided its people, for more than five months.

The movement began over a now-withdrawn extradition bill that would have allowed criminal suspects to be sent to mainland China for trial. Activists saw it as another sign of an erosion of Hong Kong’s autonomy and freedoms, which China promised would be maintained for 50 years under a “one nation, two systems” principle when the former British colony returned to Chinese control in 1997.