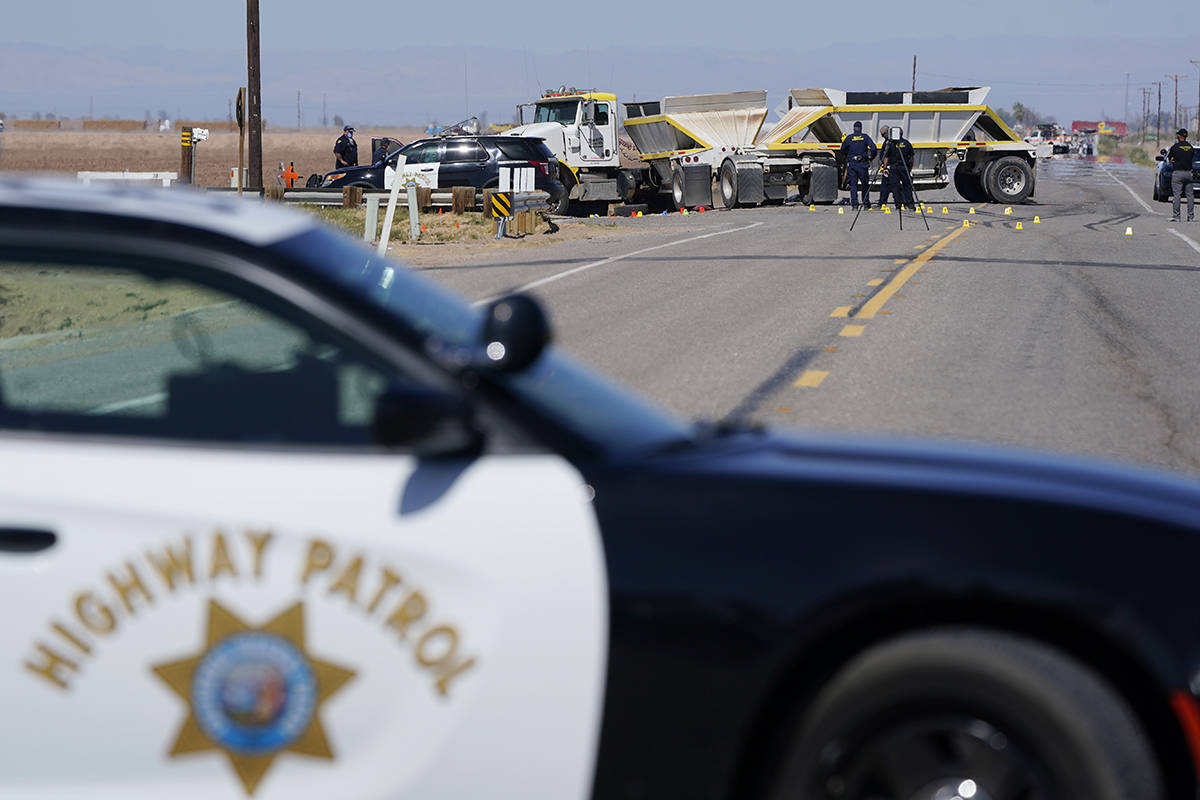 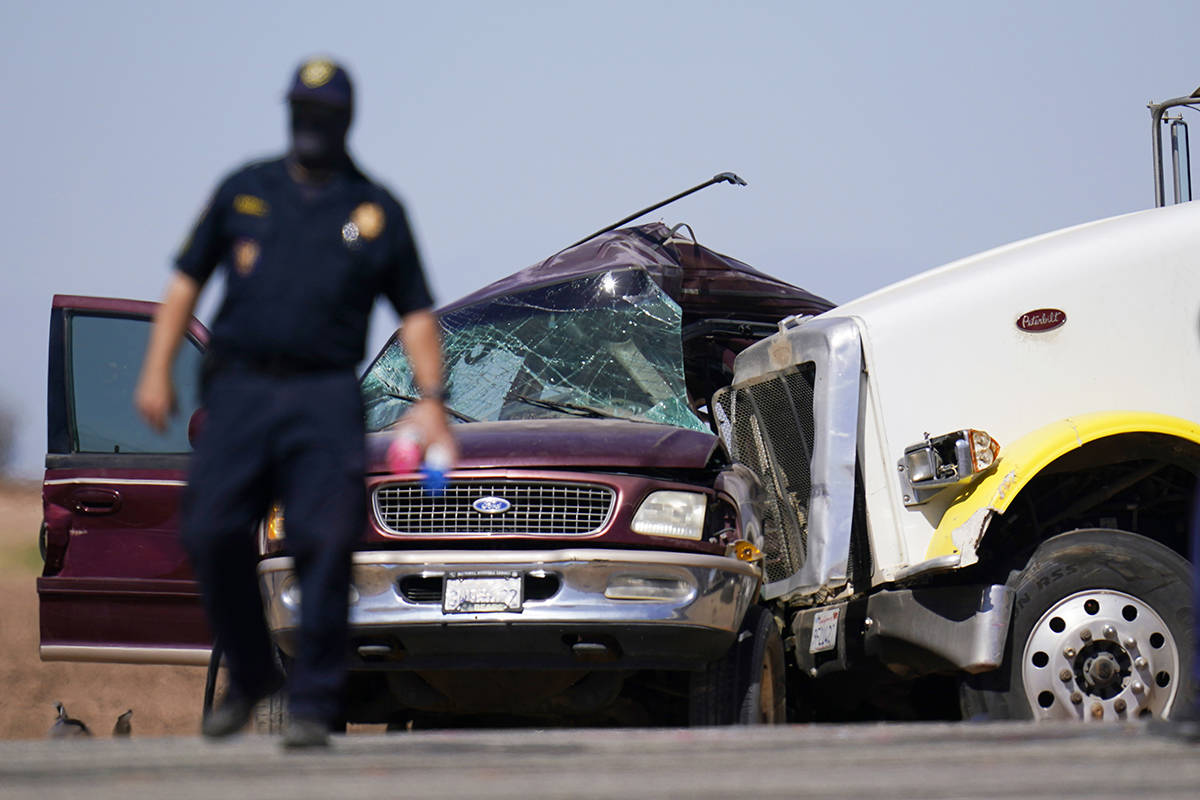 Law enforcement officers work at the scene of a deadly crash in Holtville, Calif., on Tuesday, March 2, 2021. Authorities say a semi-truck crashed into an SUV carrying multiple people on a Southern California highway, killing at least 13 people and injuring others. (AP Photo/Gregory Bull) 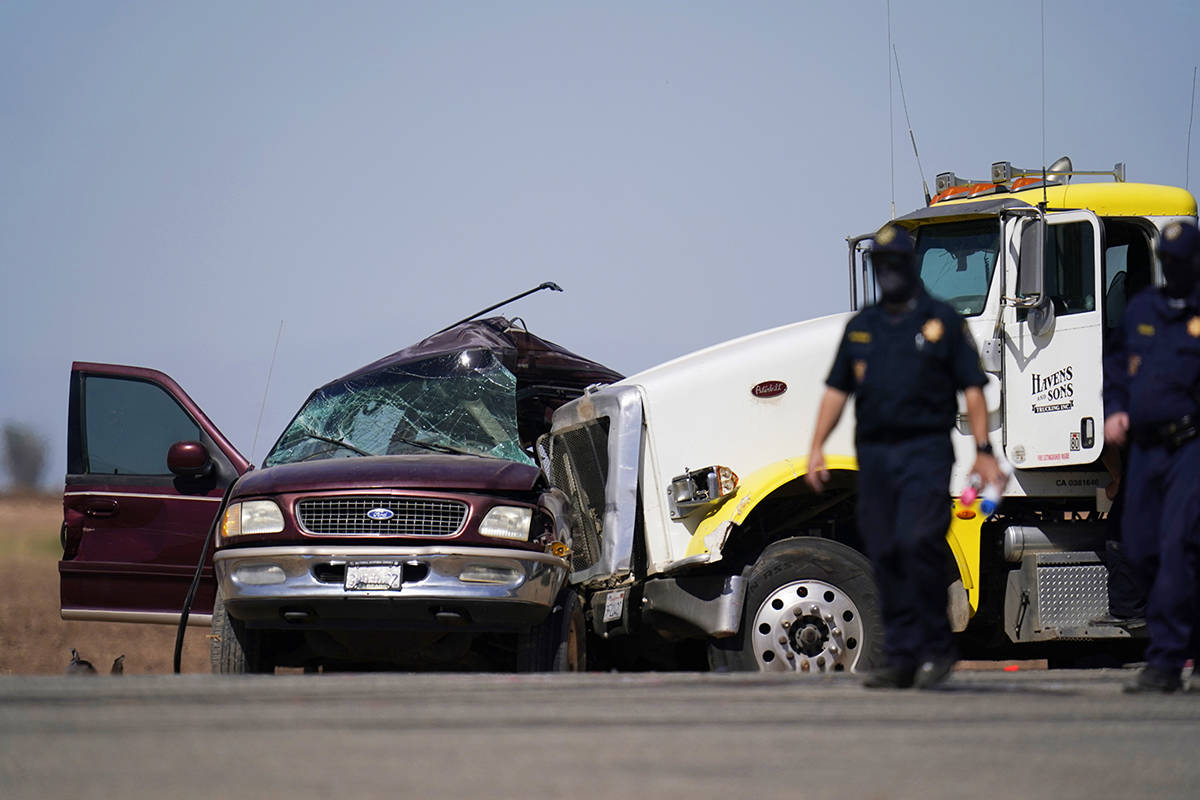 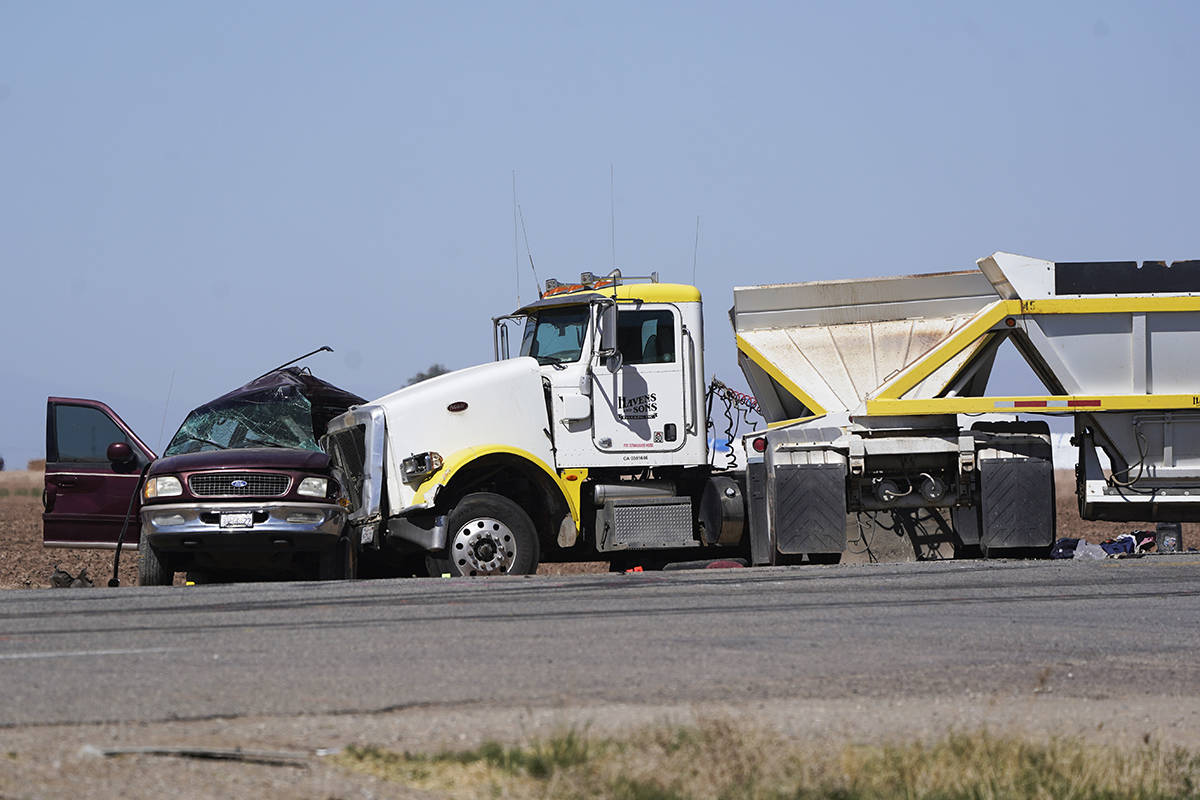 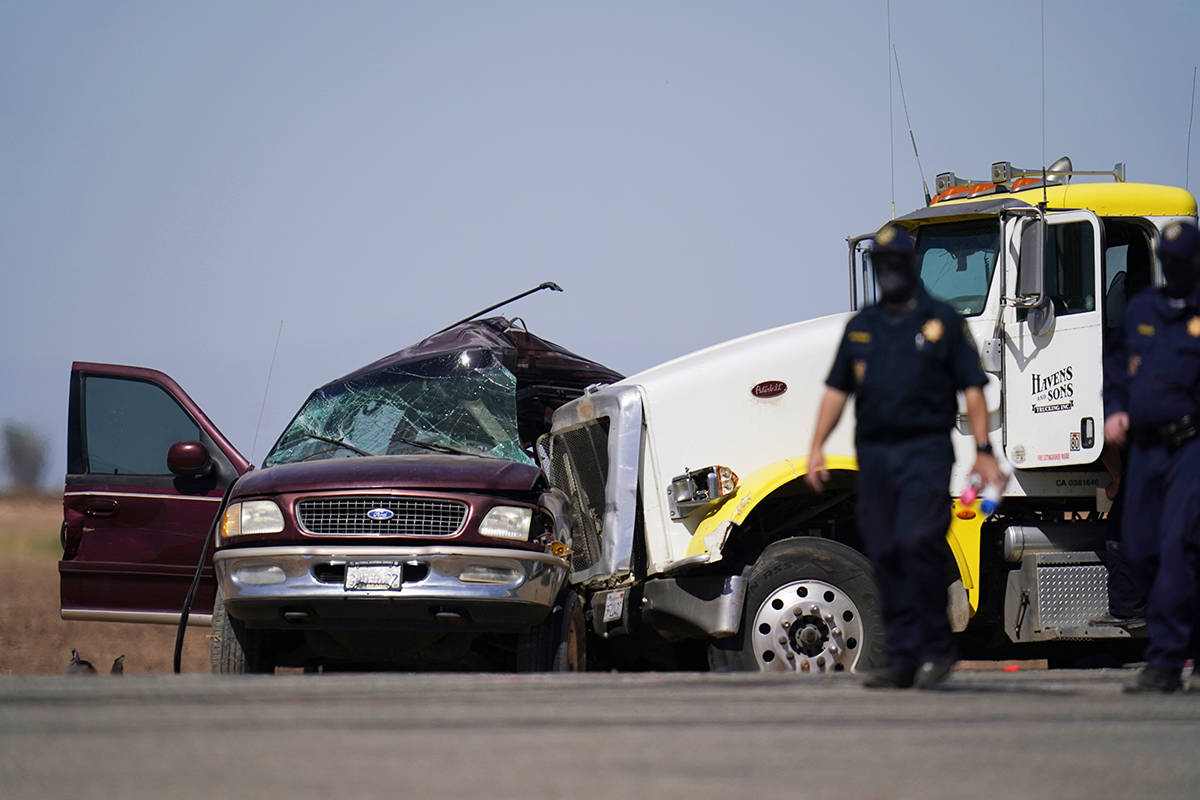 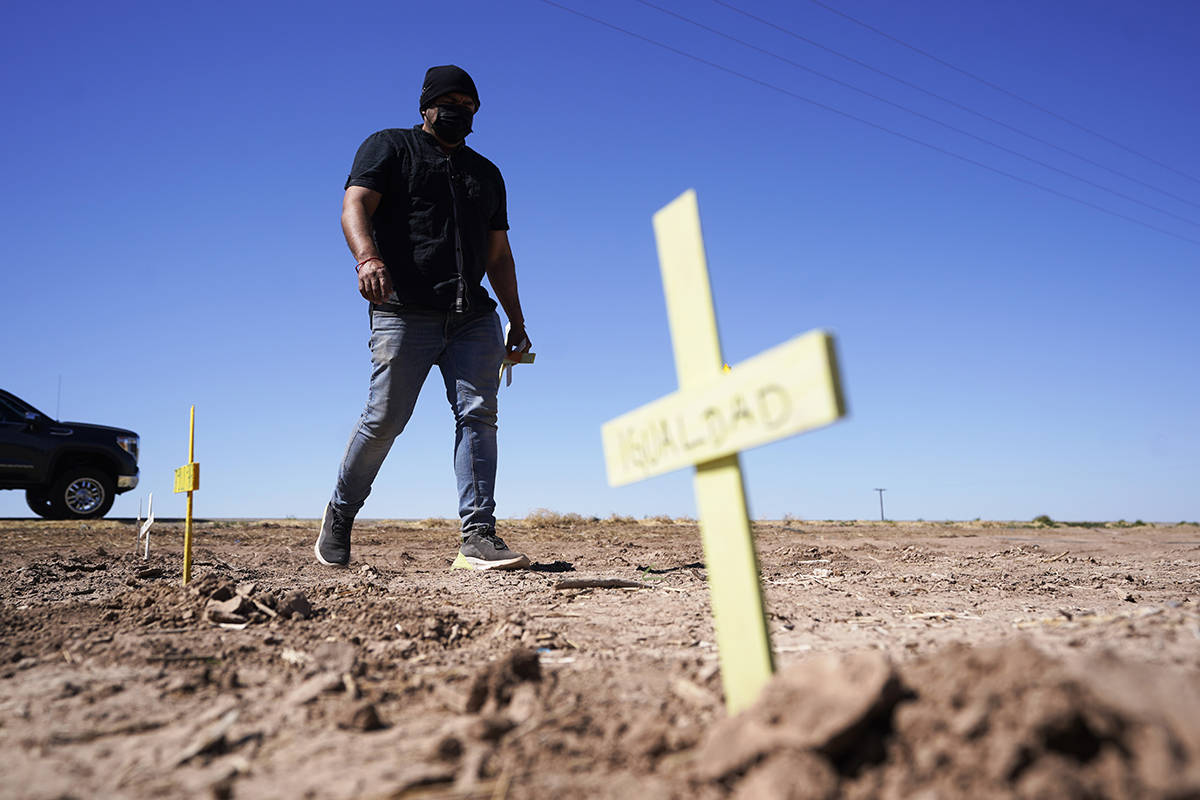 Hugo Castro leaves crosses at the scene of a deadly crash in Holtville, Calif., on Tuesday, March 2, 2021. Authorities say a semi-truck crashed into an SUV carrying 25 people on a Southern California highway, killing at least 13 people. (AP Photo/Gregory Bull)

HOLTVILLE, Calif. — Authorities are investigating whether human smuggling was involved after a crash Tuesday involving an SUV packed with 25 people and a tractor-trailer that left 13 people dead and bodies strewn across a roadway near the U.S. Mexico border.

Most of the dead were Mexicans, a Mexican official said.

When police arrived, some of the passengers were trying to crawl out of the crumpled 1997 Ford Expedition while others were wandering around the fields. The rig’s front end was pushed into the SUV’s left side and two empty trailers were jackknifed behind it.

Twelve people were found dead when first responders reached the two-lane highway, which winds through fields in the agricultural southeastern corner of California about 125 miles (201 kilometers) east of San Diego. Another person died at a hospital, California Highway Patrol Chief Omar Watson said.

“It was a pretty chaotic scene,” said Watson, who also described it as “a very sad situation.”

Roberto Velasco, director of North American affairs for Mexico’s Foreign Relations Department, confirmed Tuesday on his Twitter account that at least 10 of those killed have been identified as Mexicans. No identities have been released.

The cause of the collision was unclear, authorities said, and it also was not immediately known why so many people were crammed into a vehicle built to hold eight people safely.

Watson said the SUV only had front seats — the middle and back seats had been removed. That would allow more people to fit into the vehicle but makes it even more unsafe.

It wasn’t immediately clear whether the SUV was carrying migrants who had crossed the border, ferrying farmworkers to fields, or was being used for some other purpose.

“Special agents from Homeland Security Investigations San Diego responded … and have initiated a human smuggling investigation,” the agency said in a statement, adding that other details weren’t being released.

Macario Mora, a spokesman for Customs and Border Protection, said agents were not pursing the SUV at the time of the crash, which was initially rumored. The immigration status of the passengers was unknown.

“It was an unusual number of people in an SUV, but we don’t know who they were,” Mora said.

The people in the vehicle ranged in age from 15 to 53 and were a mix of males and females, officials said. The 28-year-old driver was from Mexicali, Mexico, just across the border, and was among those killed. The 68-year-old driver of the big rig, who is from nearby El Centro, was hospitalized with moderate injuries.

The passengers’ injuries ranged from minor to severe and included fractures and head trauma. They were being cared for at several hospitals. One person was treated at a hospital and released.

The crash occurred around 6:15 a.m. at an intersection just outside Holtville, which dubs itself the world’s carrot capital and is about 11 miles (18 kilometers) north of the U.S.-Mexico border. It was a sunny, clear morning and authorities said the tractor-trailer and its two empty containers were northbound on State Highway 115 when the SUV pulled in front of it from Norrish Road.

A California Highway Patrol report said the SUV entered an intersection directly in front of the big-rig, which hit the left side of the SUV. Both vehicles came to a halt on a dirt shoulder.

It’s not clear if the SUV ran a stop sign or had stopped before entering the highway. It’s also not yet known how fast the tractor-trailer was traveling.

The speed limit for tractor-trailers on the highway is 55 mph (88.5 kph), according to CHP Officer Jake Sanchez. The other road is also 55 mph for vehicles.

A 1997 Ford Expedition can carry a maximum payload of 2,000 pounds. If it had 25 people inside, that would easily exceed the payload limit, which taxes the brakes and makes it tougher to steer, said Frank Borris, former head of the National Highway Traffic Safety Administration’s Office of Defects Investigation.

SUVs of that age tended to be top-heavy even without carrying a lot of weight, Borris said.

“With all of that payload above the vehicle’s center of gravity, it’s going to make it even more unstable,” he said.

The crash occurred amid verdant farms that grow a wide variety of vegetables and alfalfa used for cattle feed.

Thousands of people cross into the U.S. each day to work in the fields. The harvest of lettuce and other winter vegetable crops runs from November until March, and buses and SUVs carrying farmworkers are often rumbling down the rural roads s in the early morning hours.

The area has also seen smugglers carrying migrants in trucks and vehicles. Hundreds of migrants who died after crossing the border are buried in unmarked graves in Holtville’s cemetery on the edge of town.