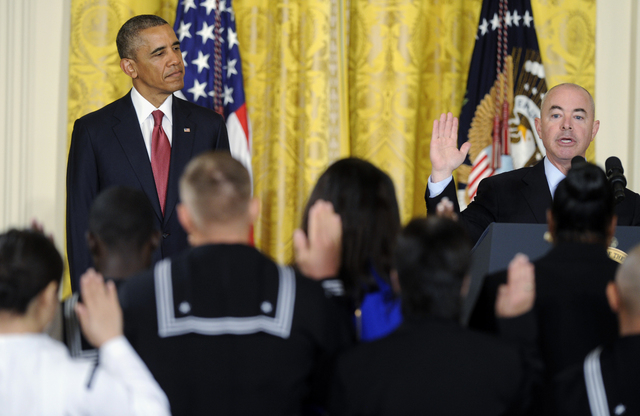 President Barack Obama watches at left as Deputy Homeland Security Secretary Alejandro Mayorkas administers the oath of allegiance during a naturalization ceremony for active duty service members and civilians, Friday, July 4, 2014, in the East Room of the White House in Washington. Obama highlighted a positive side of the immigration debate by presiding over an Independence Day citizenship ceremony for service members who signed up to defend the U.S. even though they weren't American citizens. (AP Photo/Susan Walsh) 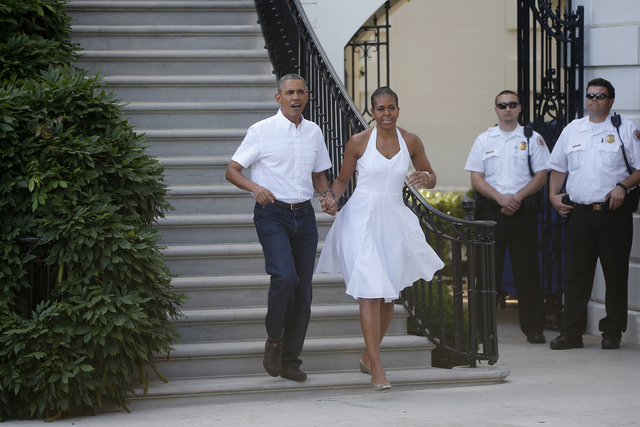 President Barack Obama and first lady Michelle Obama walk from the South Portico to greet military families as they host an Independence Day celebration on the South Lawn at the White House in Washington, Friday, July 4, 2014. (AP Photo/Charles Dharapak) 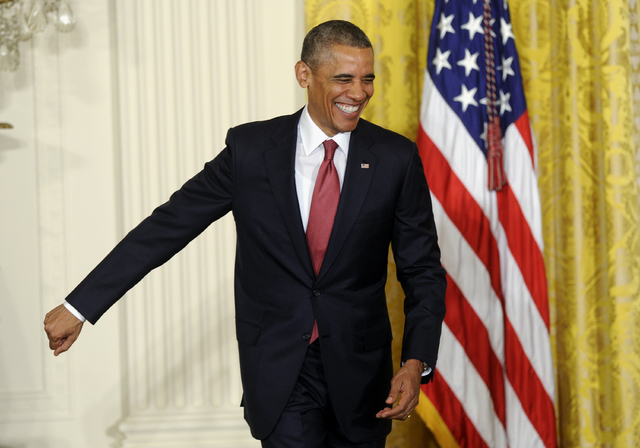 President Barack Obama walks across the stage following a naturalization ceremony for active duty service members and civilians, Friday, July 4, 2014, in the East Room of the White House in Washington. Obama highlighted a positive side of the immigration debate by presiding over an Independence Day citizenship ceremony for service members who signed up to defend the U.S. even though they weren't American citizens. (AP Photo/Susan Walsh) 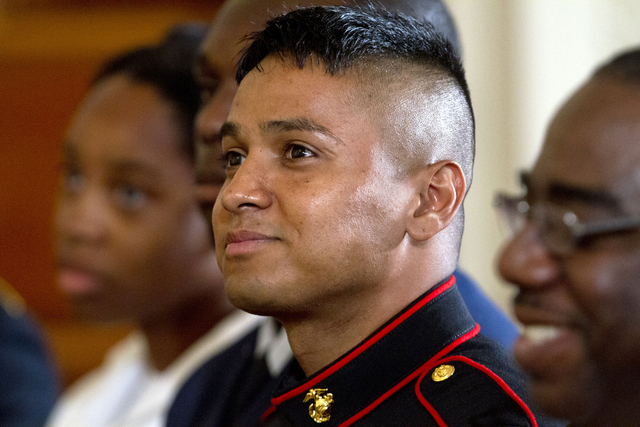 Marine Private First Class Oscar Gonzalez, who was born in Guatemala, listens as President Barack Obama speaks during a naturalization ceremony for active duty service members, including Gonzalez, and civilians, Friday, July 4, 2014, in the East Room of the White House in Washington. Obama highlighted a positive side of the immigration debate by presiding over an Independence Day citizenship ceremony for service members who signed up to defend the U.S. even though they weren't American citizens. (AP Photo/Jacquelyn Martin) 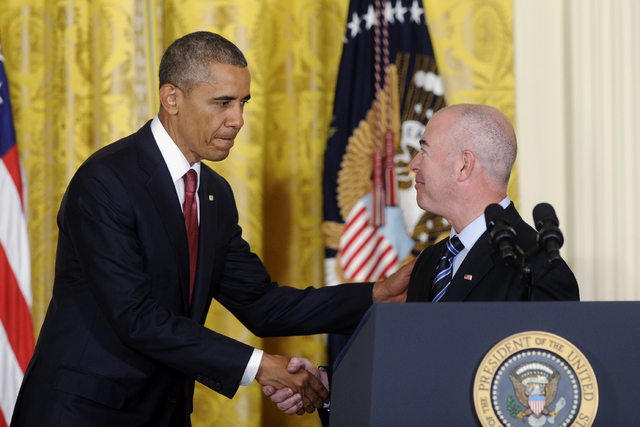 President Barack Obama shakes hands with Deputy Homeland Security Secretary Alejandro Mayorkas after he administered the oath of allegiance during a naturalization ceremony for active duty service members and civilians, Friday, July 4, 2014, in the East Room of the White House in Washington. Obama highlighted a positive side of the immigration debate by presiding over an Independence Day citizenship ceremony for service members who signed up to defend the U.S. even though they weren't American citizens. (AP Photo/Susan Walsh)

WASHINGTON — Celebrating the ethnic diversity of America, President Barack Obama said more than two dozen foreign-born service members who became U.S. citizens at the White House on the Fourth of July are vivid reminders that welcoming immigrants “is central to our way of life.”

He pleaded anew for new immigration policies, saying the vast range of backgrounds and experiences that has made America a melting pot for more than 200 years also makes the country stronger. He argued that the system must be retooled for the U.S. to remain the greatest nation on earth.

“The basic idea of welcoming immigrants to our shores is central to our way of life, it is in our DNA,” Obama said after the 25 service members representing 15 countries raised their right hands and pledged allegiance to the United States.

“From all these different strands, we make something new here in America. And that’s why, if we want to keep attracting the best and brightest from beyond our borders, we’re going to have to fix our immigration system, which is broken,” he said. “Pass common-sense immigration reform.”

The immigration issue is earning renewed attention because of the influx to the U.S. of tens of thousands of unaccompanied children from Central America. Under U.S. law, they must be returned to their home countries, angering immigration advocates who already take issue with Obama’s enforcement of deportations. They want Obama to allow the children to stay.

At the same time, Obama blames House Republicans for delaying action on legislation covering the millions already living in the U.S. illegally. A comprehensive measure the Senate passed last summer has been blocked by House leaders who also have done little to advance their own immigration proposals.

Obama announced earlier this week that, as a result of inaction on Capitol Hill, he will pursue non-legislative ways he can adjust U.S. immigration policy on his own. He scheduled a trip to Texas next week, mostly to raise money for Democratic candidates, but plans not to visit the border.

“I’m going to keep doing everything I can to keep making our immigration system smarter and more efficient,” Obama said Friday.

Across the country, more than 100 demonstrators, most in support of immigrants, gathered again Friday outside a U.S. Border Patrol station in Murrieta, California, where the agency intends to process some of the immigrants who have flooded the Texas border with Mexico.

Earlier this week a crowd of protesters blocked buses carrying women and children migrants who were flown in from overwhelmed Texas facilities. The Border Patrol had to take the migrants elsewhere.

Later Friday, Obama and his wife, Michelle, welcomed hundreds of service members and their families, including the new citizens, to an all-American barbecue on the South Lawn that was sponsored by the USO, a nonprofit organization that provides services and entertainment to U.S. troops and their families. Held under bright sunny skies after Hurricane Arthur blew north through the region, the event featured food, patriotic music by the U.S. Marine Band and a scheduled concert by the rapper Pitbull, along with prime seating for the fireworks on the National Mall.

Obama said that since the nation’s founding 238 years ago the U.S. has become the “greatest democratic, economic and military force the world has ever known” and a beacon for others looking on from beyond its borders.

“Immigrants from around the world dream of coming to our shores,” he said. “Young people aspire to study at our universities, other nations look to us for support (and) leadership in times of disaster and conflict and uncertainty.

“And when the world looks to America so often they look to all of you, the men and women of our Armed Forces,” Obama said.

The president explained that he had other reasons to celebrate on Friday.

“This is always a special day for us because this is Malia’s birthday,” he told guests. His oldest child turned 16.