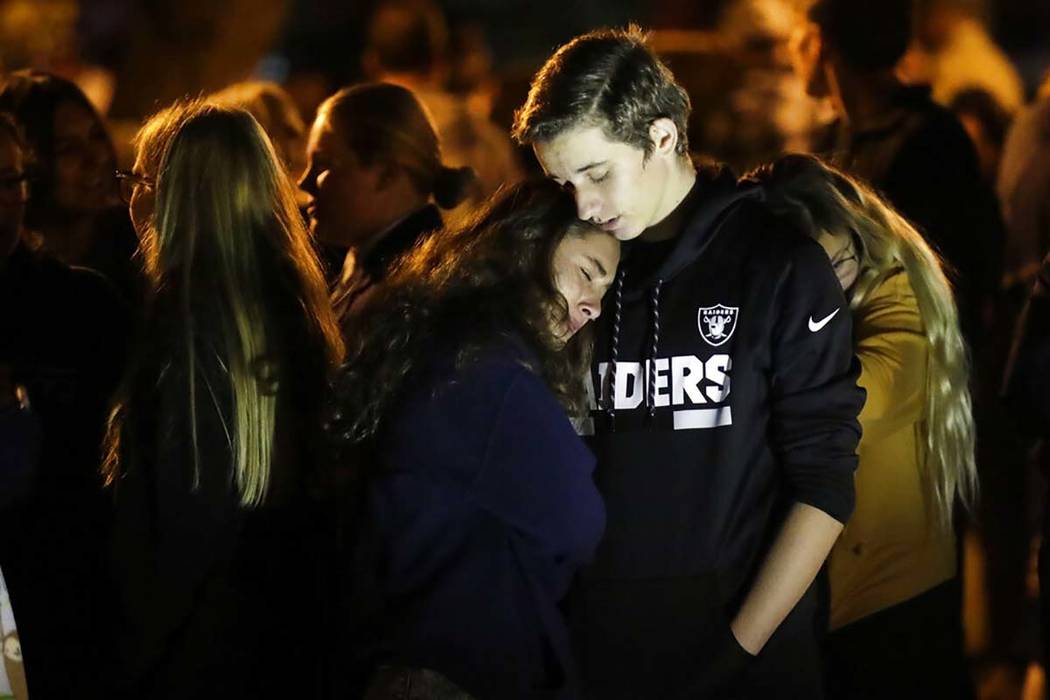 Hannah Schooping-Gutierrez, center, a student at Saugus High School, is comforted by her boyfriend Declan Sheridan, at right, a student at nearby Valencia High School during a vigil at Central Park in the aftermath of a shooting at Saugus Thursday, Nov. 14, 2019, in Santa Clarita, Calif. (AP Photo/Marcio Jose Sanchez) 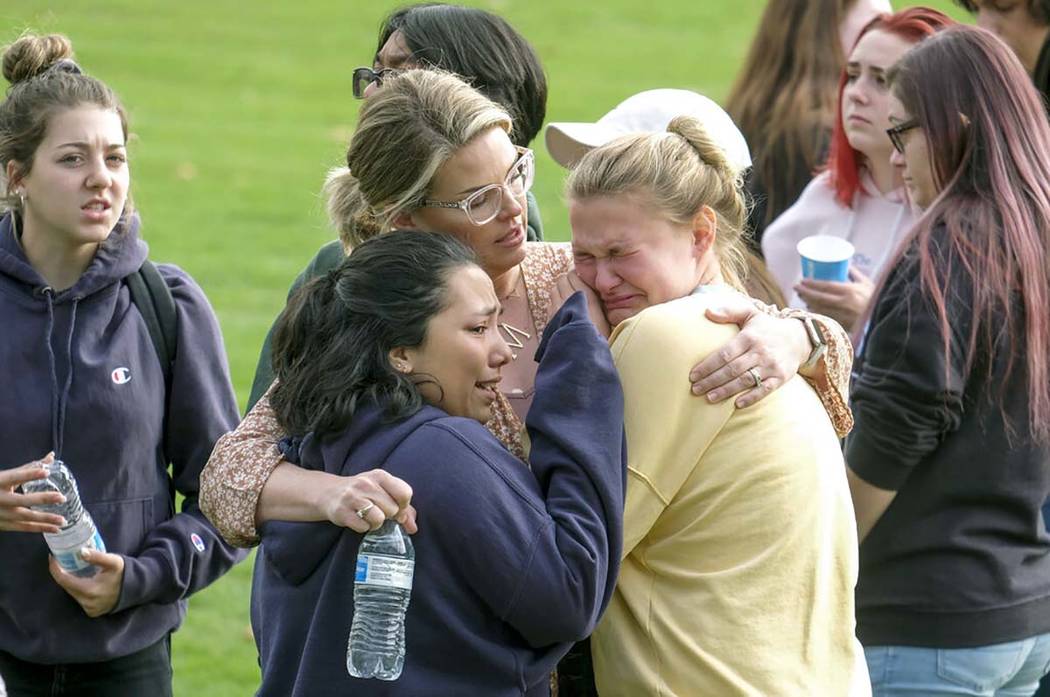 Students are comforted as they wait to be reunited with their parents following a shooting at Saugus High School that injured several people, Thursday, Nov. 14, 2019, in Santa Clarita, Calif. (AP Photo/Ringo H.W. Chiu) 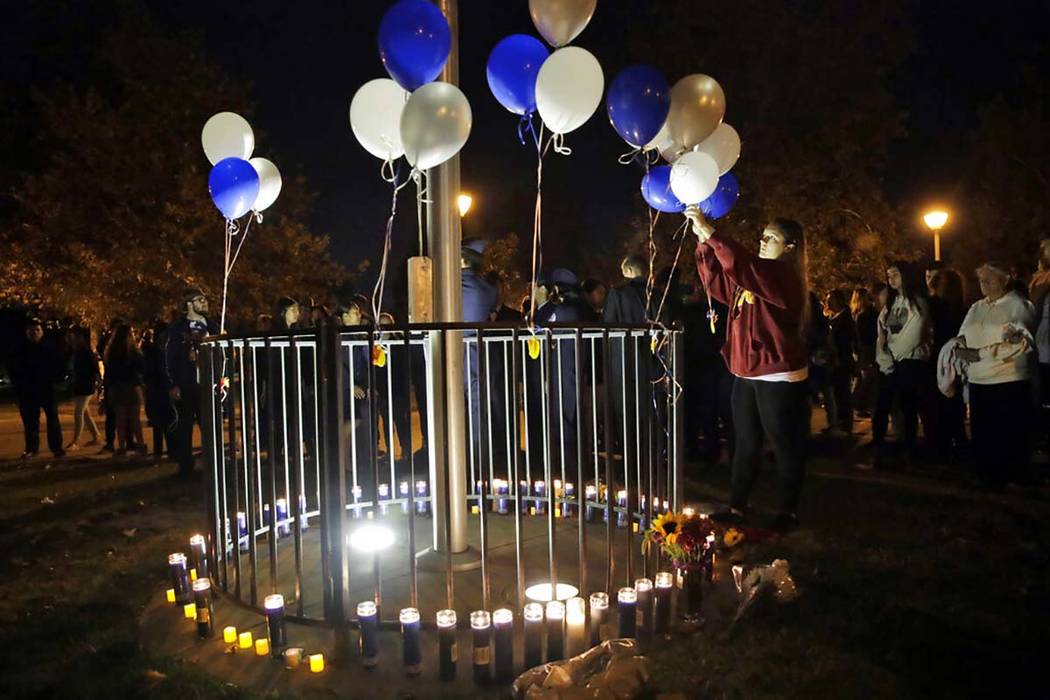 Jessica Dumont, a former student at Saugus High School, places balloons on a makeshift memorial at Central Park in honor of the victims of a shooting at the high school Thursday, Nov. 14, 2019, in Santa Clarita, Calif. Los Angeles County sheriff’s officials say a 16-year-old student shot several classmates and then himself in a quad area of Saugus High School Thursday morning. (AP Photo/Marcio Jose Sanchez) 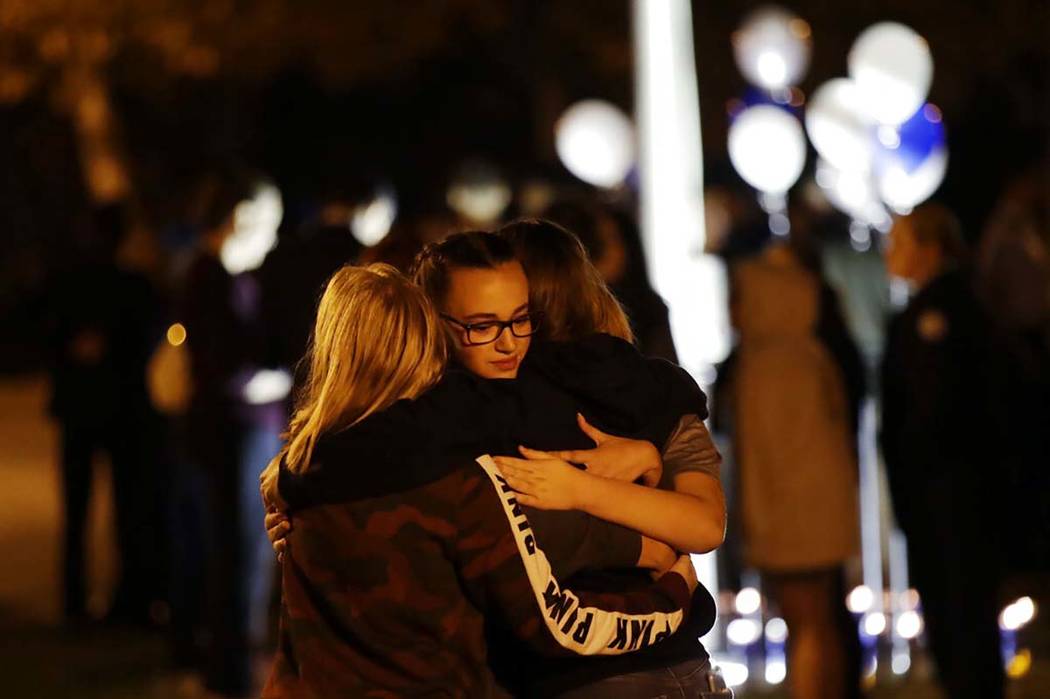 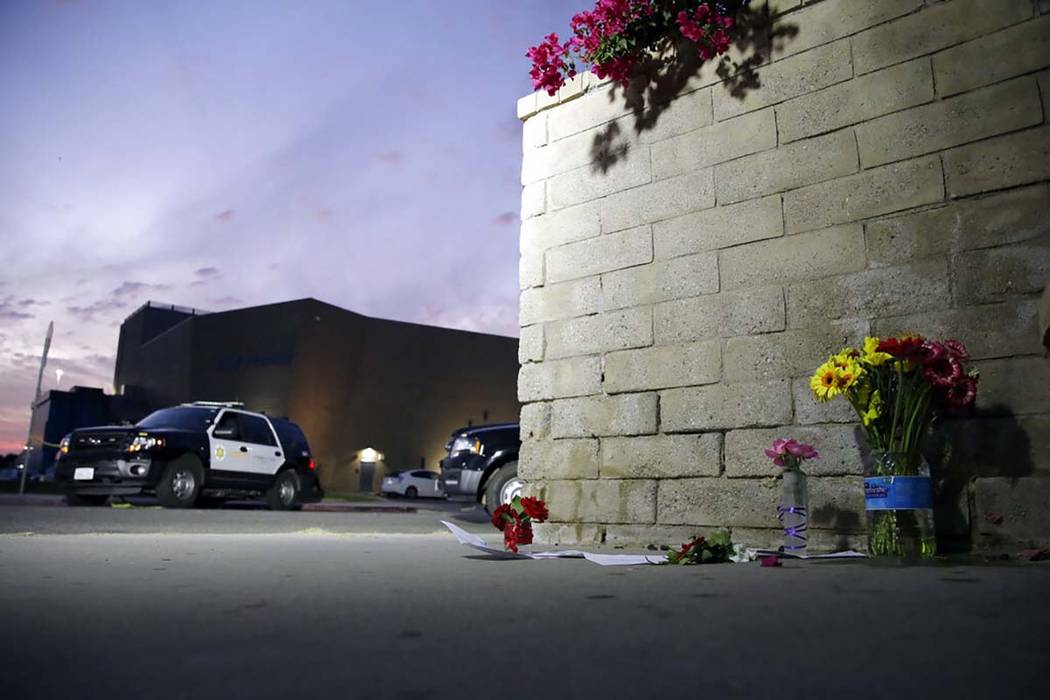 Flowers are placed in front of Saugus High School in the aftermath of a shooting on Thursday, Nov. 14, 2019, in Santa Clarita, Calif. (AP Photo/Marcio Jose Sanchez)

SANTA CLARITA, Calif. — Investigators worked to figure out why a boy known as a “regular kid” opened fire outside a Southern California high school on his 16th birthday, killing two students and wounding more before turning the gun on himself.

Investigators so far offered no motive for Thursday’s shooting at Saugus High School in the Los Angeles suburb of Santa Clarita.

The teenager was described as a quiet and smart kid who was a Boy Scout and had previously run track for his school.

Gunfire began around 7:30 a.m. and authorities estimated that the suspect took just 16 seconds to pull out the weapon, shoot five classmates and then himself.

At the time, students were standing around and greeting each other in the large central outdoor area.

“He just fires from where he is. He doesn’t chase anybody. He doesn’t move,” sheriff’s homicide Capt. Kent Wegener said.

The attacker was last reported Thursday to be hospitalized in critical condition, officials said.

Video showed the last thing the assailant did was shoot himself with the final bullet in the .45-caliber handgun, Wegener said. The weapon was empty when it was recovered.

Doctors said Friday morning that two girls, ages 14 and 15, who were shot are doing well and should be released from the hospital in a day or two.

A 14-year-old boy was treated and released from another hospital, authorities said.

Sheriff Alex Villanueva said the shooter was a student at the school but did not identify him.

The sheriff said a biography on an Instagram account reported as possibly belonging to the teen contained the posting: “Saugus, have fun at school tomorrow.”

The message was discovered Thursday morning after the shooting. It was later removed, and investigators do not know who made the change, Wegener said.

Investigators were searching the suspect’s home. Wegener said the sheriff’s department had not received any recent calls to the boy’s house “that would indicate that there was turmoil” there.

Joe Fitzpatrick, a senior who helped the teacher in the boy’s physics class, called him a “good, quiet kid” who didn’t miss assignments and did well on tests.

“He just seemed like one of those regular kids,” Fitzpatrick said.

Fellow students and a neighbor say he was a Boy Scout who was smart, quiet and gave no indication he would become violent. One girl who knew him for years said he wasn’t bullied and had a girlfriend.

The sound of gunfire sent some students running while others and staff followed recently practiced security procedures.

Kyra Stapp, 17, was watching a documentary in class when she heard two gunshots. Panicked students ran in and reported the shooting.

Stapp texted her mother and tried not make any noise. They exchanged messages as sirens screamed and helicopters and deputies carrying rifles and shotguns swarmed the campus. Then Kyra fell silent while officers escorted students out.

“She’s been texting me and all of a sudden she’s not,” Tracy Stapp said. “That was like the worst 10 minutes of my life, I swear.”

Shauna Orandi, 16, said she was in her Spanish class doing homework when she heard four gunshots that she initially mistook as instruments from a band class. She said a student burst into the room saying he’d seen the gunman, and her classmates were stunned into silence.

“My worst nightmare actually came true,” she said later as she left a nearby park with her father. “This is it. I’m going to die.”

Orandi said she has heard about so many school shootings that she always assumed she’d panic. But she stayed calm with the help of her teacher, who locked down the classroom.

The campus is surrounded by a fence, and students enter through a limited number of gates each morning. There are a dozen security cameras but no metal detectors.

Around the same time as the shooting, a 9-year-old boy was suspected of shooting three other students with a BB gun outside Washington Elementary STEM Magnet School in Pasadena, police said.

A police official says it’s undetermined if the boy will be arrested and that there’s no indication it’s connected to the Saugus shooting 30 miles away.