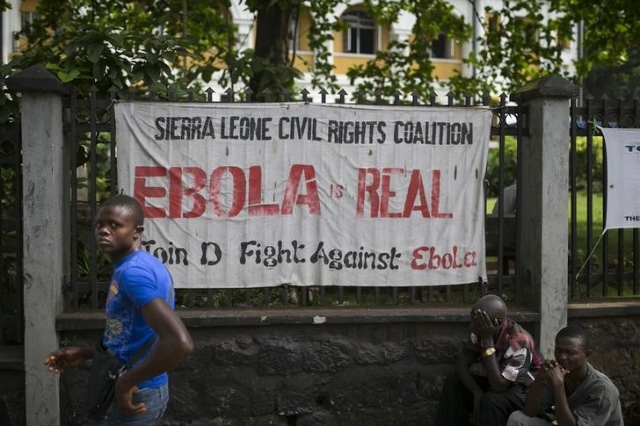 A man walks past a banner about Ebola in Freetown, Sierra Leone, December 16, 2014. REUTERS/Baz Ratner

FREETOWN — Health authorities quarantined hundreds of people in northern Sierra Leone on Monday after a 16-year-old girl died of Ebola in an apparent case of sexual transmission, the first confirmed death from the virus in the district for nearly six months.

Sierra Leone celebrated last month when it discharged the last remaining Ebola patient from its treatment centers. But since then a new spate of cases has erupted, leaving two dead and five people in treatment.

The worst outbreak of Ebola on record has killed more than 11,000 people in Sierra Leone, Guinea and neighboring Liberia since it began in December 2013.

Liberia was declared Ebola-free this month but growing evidence that the virus may survive longer than previously thought in sperm has raised fears of fresh outbreaks.

Emmanuel Conteh, head of the Ebola Response Centre for the district of Bombali in northern Sierra Leone, said that some 690 people in the village of Robuya where Kadiatu lived would be isolated for three weeks.

Conteh said health workers were investigating how the teenager got infected, since she had not traveled outside the village in years. Initial suspicions are that she had sex with an Ebola survivor.

“We are baffled by that possibility because the survivor in question was discharged in March, way beyond the 90-day period within which sexual transmission is said to be possible,” Conteh said.

The head of Sierra Leone’s Ebola response, Pallo Conteh, has warned of a possible new surge of the virus after a woman died in the nearby Kambia district, on the border with Guinea. Nearly 1,000 people are into their second week of quarantine there, but a “high risk” contact remains on the loose, Conteh said.