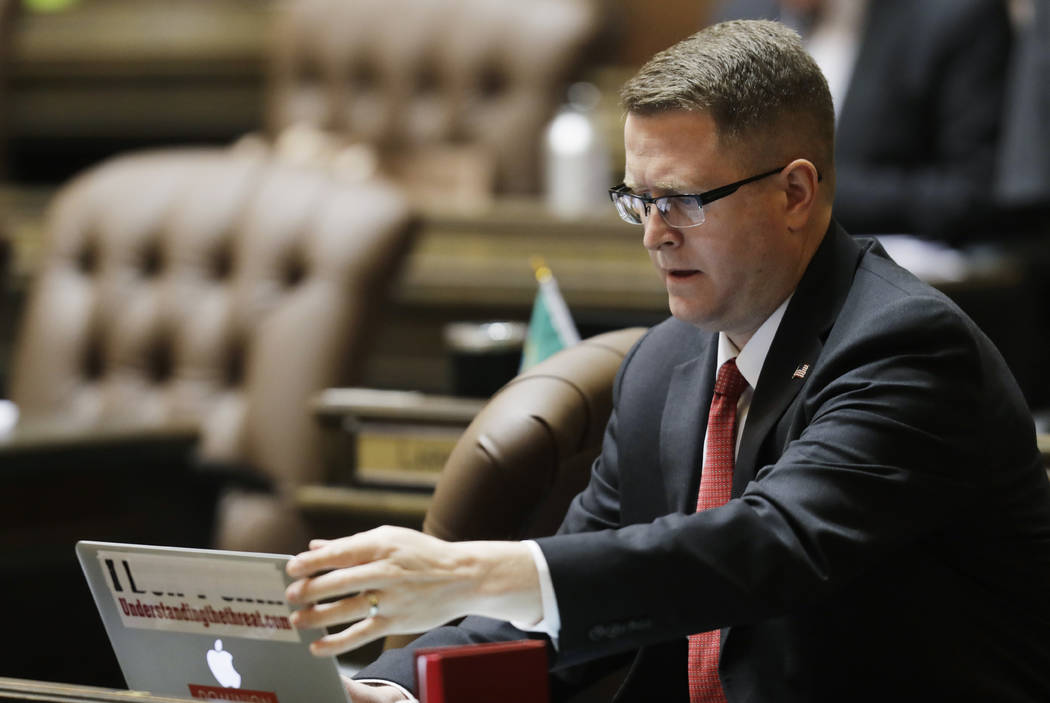 An investigative report prepared for the Washington Legislature and released Thursday, Dec. 19, 2019 said that state Rep. Matt Shea, R-Spokane Valley, took part in "domestic terrorism" against the United States during a 2016 standoff at a wildlife refuge in Oregon and traveled throughout the West meeting with far-right extremist groups. (Ted S. Warren/AP, File) 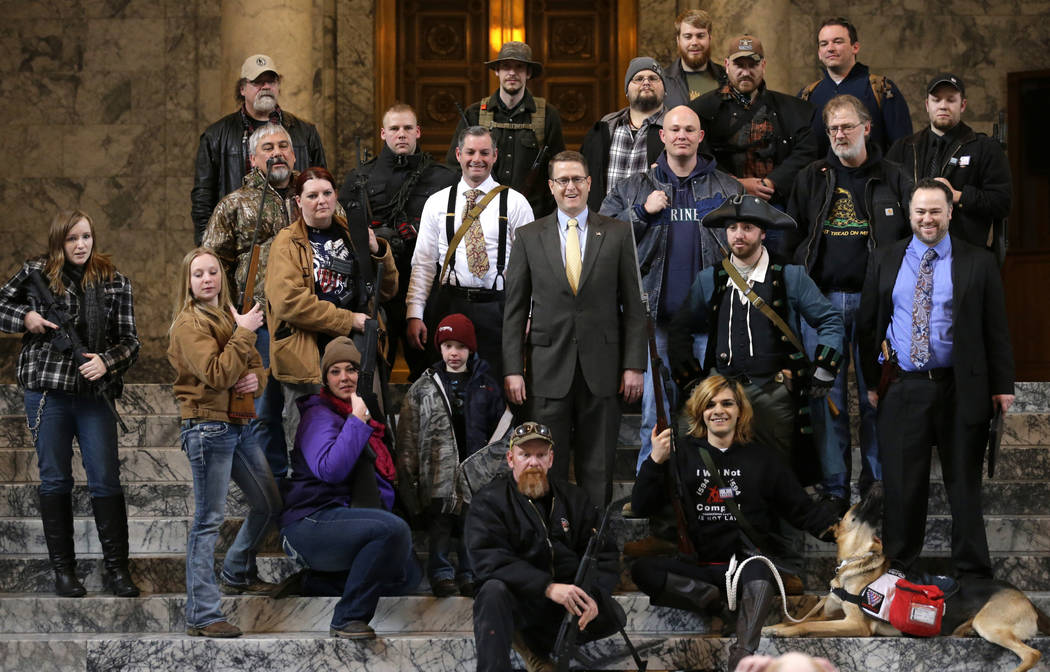 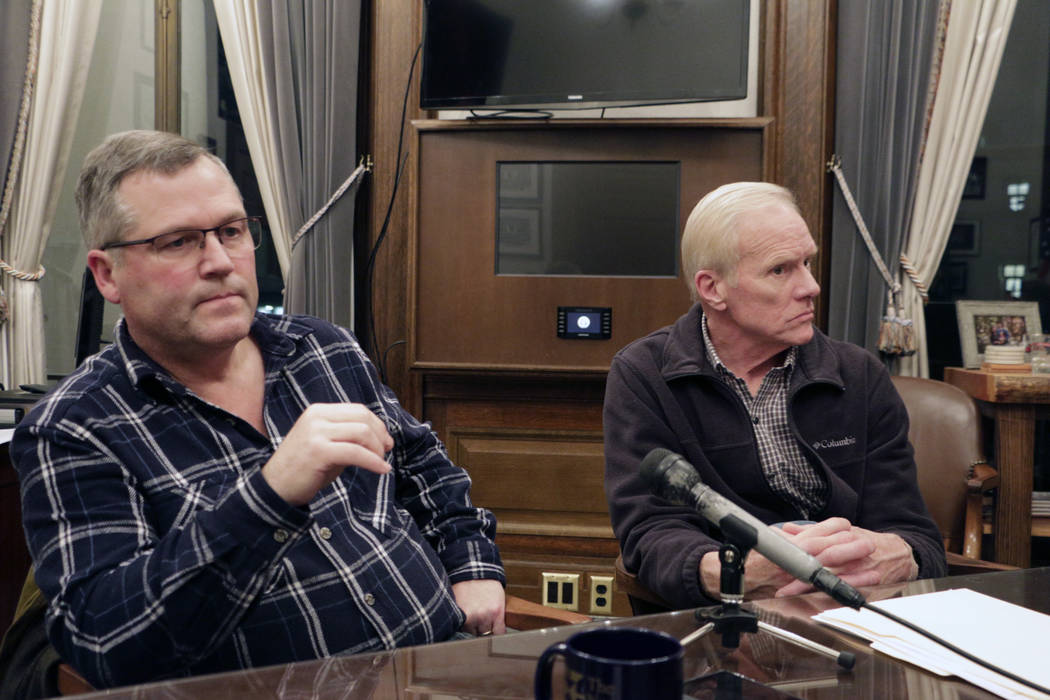 House Republican Leader J.T. Wilcox, left, and caucus chair, Rep. Paul Harris talk to the media on Thursday, Dec. 19, 2019 in Olympia, Wash. Wilcox has called on Republican Rep. Matt Shea to resign following an investigative report that found he took part in "domestic terrorism" against the United States during a 2016 standoff at a wildlife refuge in Oregon. (Rachel La Corte/AP)

SPOKANE, Wash. — A Washington state lawmaker took part in “domestic terrorism” against the United States during a 2016 standoff at a wildlife refuge in Oregon and traveled throughout the West meeting with far-right extremist groups, according to an investigative report released Thursday.

The report prepared for the state Legislature said Rep. Matt Shea, a Republican from Spokane Valley in eastern Washington, also found that he trained young people to fight a “holy war,” condoned intimidating opponents and promoted militia training by the Patriot Movement for possible armed conflict with law enforcement.

“He cannot use House Republican staff, he cannot meet with the caucus, his office will be moved,” Wilcox said. Shea will also be removed from his House committee assignments.

The incoming House Speaker, Democratic Rep. Laurie Jinkins, said the report had been forwarded to federal prosecutors and the FBI. She said her caucus would continue to work with Republicans to explore options based on the report’s findings.

Both Democratic and Republican politicians had demanded Shea’s resignation.

Shea did not respond to phone and email messages requesting comment by The Associated Press on Thursday.

‘I will not back down’

Prior to the release of the report, Shea was defiant.

“I will not back down,” Shea said. “I will continue to fight for our shared values that have made this country such a blessing to the rest of the world.”

Shea said he has been denied any opportunity to review and respond to the report, prepared by an outside investigator. The report noted Shea declined to be interviewed as part of the probe.

“Due process is the right of every citizen, and should be afforded to all members of the House regardless of their views or party affiliation,” Shea said.

The investigative team, headed by a former FBI agent and a former law enforcement officer, was hired in July.

The team’s findings, first reported by the news website Crosscut, said: “Investigators obtained evidence that Representative Shea planned, engaged in, and promoted a total of three armed conflicts of political violence against the United States … in three states outside the State of Washington over a three-year period to include 2014, 2015 and 2016.”

The report said Shea “participated in an act of domestic terrorism” when in 2016 he visited the Malheur National Wildlife Refuge to support of its armed occupation by two sons of rancher Cliven Bundy.

Shea “engaged in conversations with Ammon Bundy and other militia members in the planning and preparation of the armed takeover of the Malheur National Wildlife Refuge in Burns, Oregon,” the report said. He also issued a press release on Dec. 11, 2015, asking for patriot and militia groups near the takeover to rally against the U.S. government, according to the report.

After the occupation of the wildlife refuge ended, Shea posted on his Facebook page: “After much prayer, I’m afraid violence might be necessary to take our country back,” the report said.

Shea also went to Cliven Bundy’s Nevada ranch in 2014 during a standoff with FBI agents in a dispute over grazing rights. And in 2015, in Idaho, Shea resisted the planned removal of firearms from a military veteran who was not eligible to have them.

The report also said that Shea in 2012 engaged in the intimidation when he posted a photo of himself on his Facebook page standing in front of a political opponent’s home, and refused to remove the photo despite requests from his adversary, GOP officials and law enforcement.

A 2017 online chat indicated the lawmaker joined a discussion in which others suggested violence against left-wing protesters. Reports of the chat surfaced in the Guardian earlier this year and were expanded by The Spokesman-Review newspaper.

Based on chat transcripts, there’s no indication Shea advocated violence himself, although he offered to do background checks on political opponents.

The texts came after Shea, a lawyer who was first elected in 2008, attracted international attention over a document he wrote that laid out a ”biblical basis for war” against gay marriage and abortion. He later said that the document was taken out of context.

Shea has also pursued creation of a 51st state in eastern Washington that would be called Liberty and run on biblical principles.

The Army veteran hosts a weekly show on the American Christian Network and in 2017 complimented members of Team Rugged, a group that one member said provides special-forces-type gun training for young men so they can be effective in Christian warfare.

Shea is popular in his very conservative district and was re-elected in 2018 with 58% of the vote.