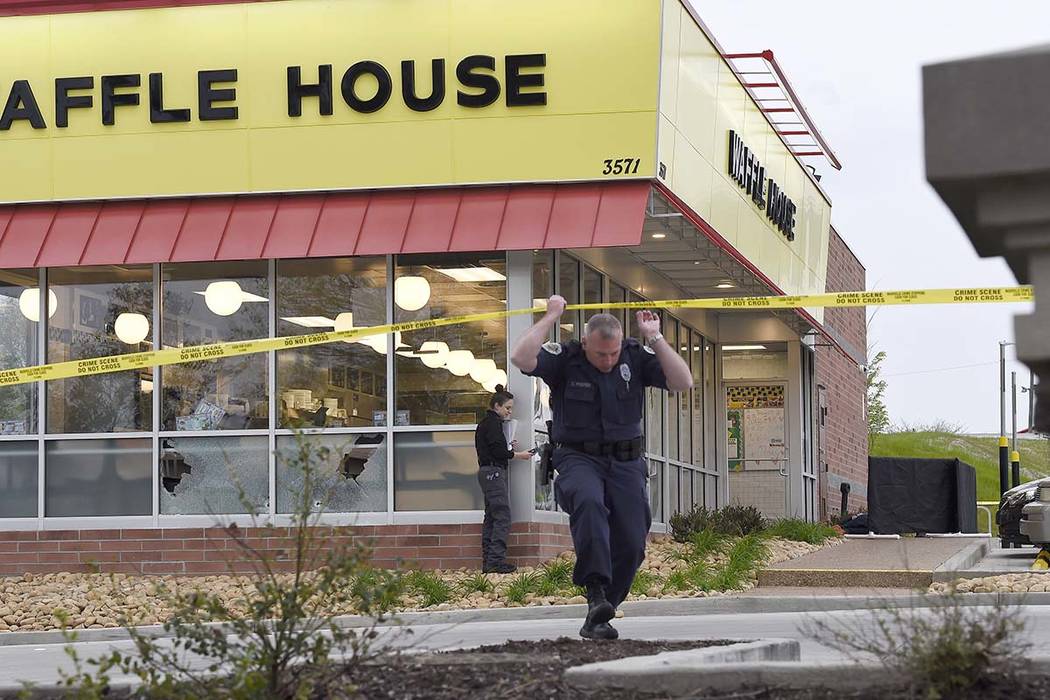 Law enforcement officials work the scene of a fatal shooting at a Waffle House in the Antioch neighborhood of Nashville, Sunday, April 22, 2018. (George Walker IV/The Tennessean via AP) 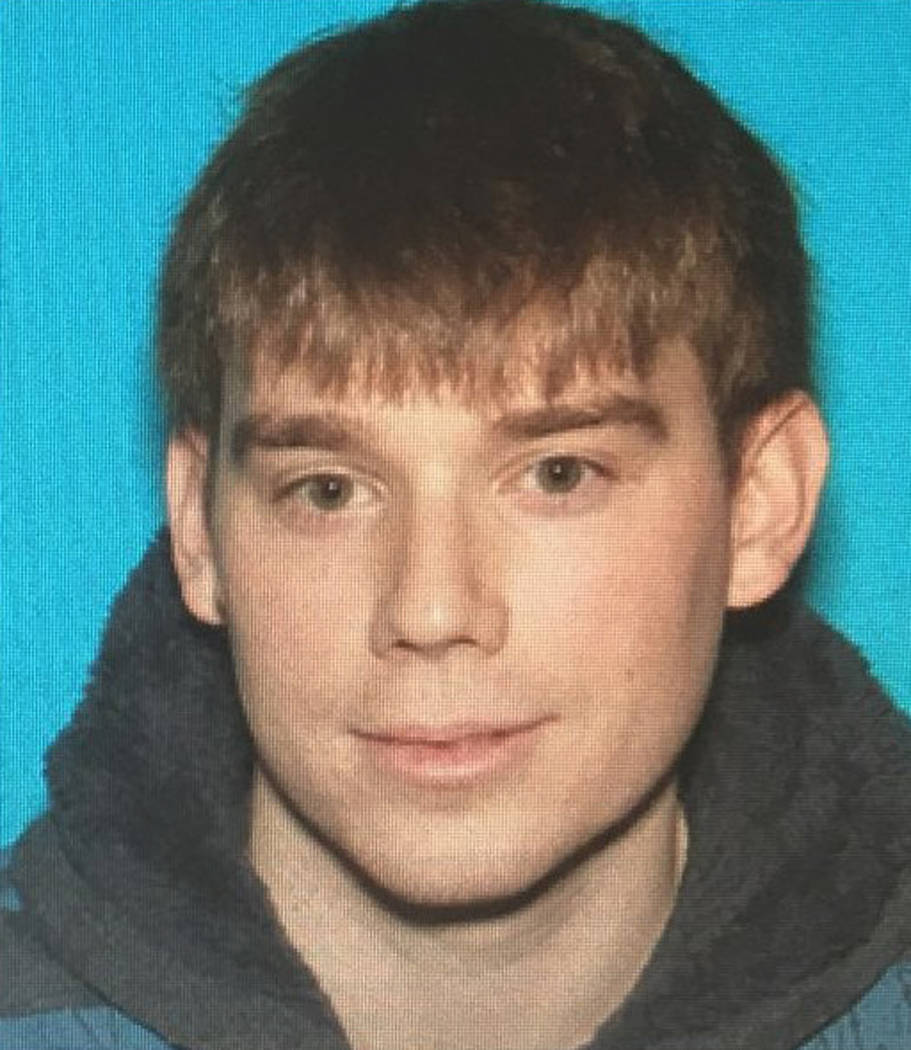 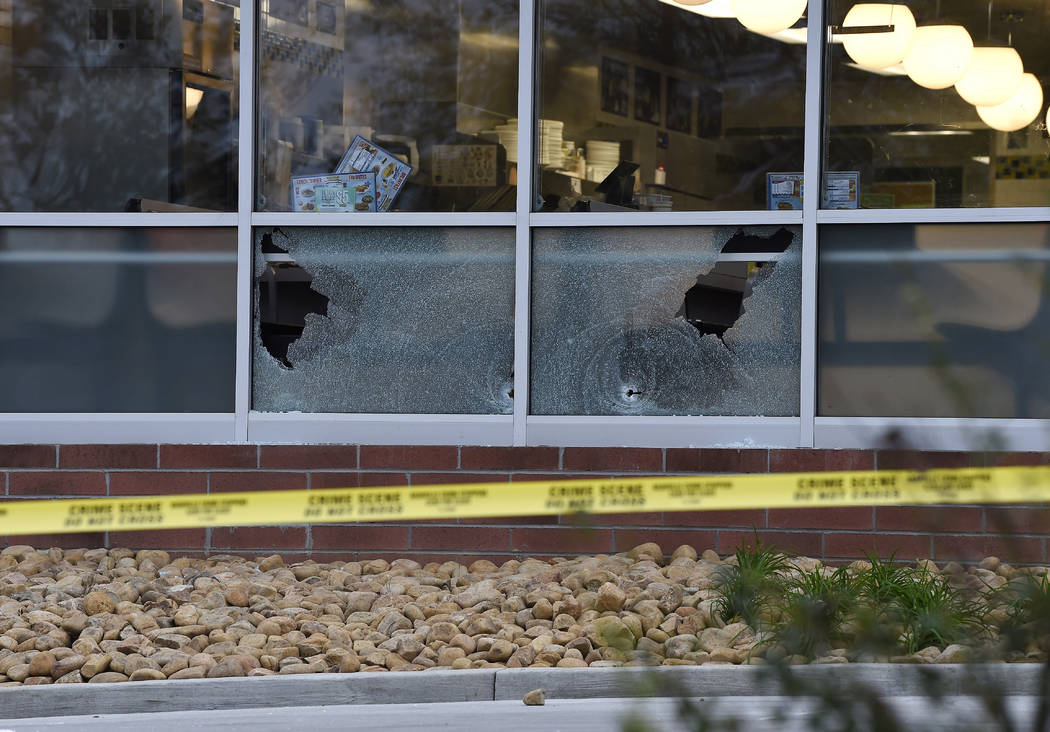 Bullet holes are seen at a Waffle House after a fatal shooting in the Antioch neighborhood of Nashville, Sunday, April 22, 2018. (George Walker IV/The Tennessean via AP)

NASHVILLE, Tenn — Four people were killed in a shooting at a Waffle House restaurant in Tennessee early Sunday, according to police, who credited a bystander with saving many lives by wresting a weapon away from the gunman.

The man says he had entered the restaurant just two minutes ahead of the gunman.

James Shaw Jr. says he had gone to eat early Sunday after visiting a nightclub. He then heard gunshots, but initially though they were stacks of plates that had fallen over. Shaw says it was then that he saw restaurant workers scatter and a body near the front door as the gunman burst through the entrance.

“He shot through that door; I’m pretty sure he grazed my arm. At that time I made up my mind … that he was going to have to work to kill me. When the gun jammed or whatever happened, I hit him with the swivel door,” Shaw told a news conference Sunday.

The gun then jammed up, and Shaw managed to get one hand on the gun and grab it. He then threw it over the countertop and took the shooter with him out the entrance. Shaw says the shooter then trotted away.

Authorities are hailing Shaw as a hero for preventing further bloodshed at the restaurant.

Authorities say the suspect in a deadly shooting at a restaurant in Nashville was arrested last year by the U.S. Secret Service for being in a restricted area near the White House.

Metro Nashville Police Department spokesman Don Aaron said 29-year-old Travis Reinking’s firearms authorization was then revoked at the request of the FBI, and four weapons were seized, including the AR15 that he allegedly used in the shooting at the Waffle House restaurant early Sunday. Four people were killed.

Aaron says the four guns were returned to the suspect’s father, who acknowledged giving them back to his son.

Police have the AR15 and another gun found during a search earlier Sunday. But two other guns are unaccounted for. Aaron says Reinking is still at large following the 3:25 a.m. shooting and could possibly be armed with the two guns.

Aaron said the gunman arrived at the restaurant and sat in the parking lot for four minutes and shot two people with an assault rifle, then went inside and continued firing.

“No doubt (Shaw) saved many lives by wresting the gun away and tossing it over the counter and prompting the man to leave,” Aaron said.

At least four people were injured.

The suspect, wearing only a green jacket, shed the jacket after fleeing the restaurant. Aaron said he lived at an apartment complex in the area and, based on witness reports, went to the complex and put on a pair of pants.

Aaron said witnesses saw a man in a nearby wooded area, and police dogs were tracking the man, some six hours after the 3:25 a.m. shooting.