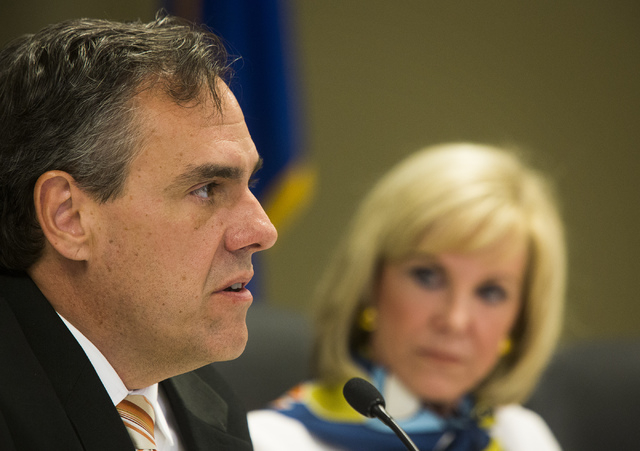 Dale Erquiaga,left, Nevada's superintendent of public instruction, and Board President Elaine Wynn are seen during the state Board of Education in September. (Jeff Scheid/Las Vegas Review-Journal File)

Following orders from state lawmakers in 2013, the Nevada State Board of Education is phasing out the four high school proficiency exams in reading, writing, math and science that are required to graduate.

The board has decided that current sophomores, juniors and seniors will still have to pass the exams, largely because that’s the requirement under which they started high school.

Board member Dave Cook of Carson City said research has shown no evidence that students who pass the exams are more successful in college or career, so “why prolong them?”

“This is a totally subjective process forced upon students when it is of no benefit,” he said.

The board unanimously decided Thursday to lower the minimum math passing score for current sophomores and juniors, but not by how much. Students currently need to earn a minimum score of 300 out of 500 to pass.

The board will likely decide on what the new passing score will be Feb. 26, when a test vendor presents the estimated minimum score needed to maintain a 54 percent pass rate among sophomores. Students first take the test their sophomore year and can retake the test throughout high school until they pass.

This year, 56 percent of sophomores scored at least 252 on their first, so the new minimum will likely be around there, state officials said.

“There’s a consensus that 300 is a bridge too far,” said Dale Erquiaga, superintendent of Nevada public schools.

The current freshmen class and those behind them will take end-of-course exams instead of proficiency exams.

While the makeup and scoring of the end-of-course exams remains unclear, the board decided how to roll them out. Current freshman and eighth-graders will take the English language arts and math exams when they’re sophomores. Current seventh-graders will take those tests and a science exam. A social studies exam will be added when available.

The board decided Thursday that students will be able to take the exams an unlimited number of times until they pass. The state will adopt a process to recover the cost of retakes, possibly charging students.

That and many more decisions about the exams are to come.

“Clearly, this is one of the most substantive things we’ll be deciding this year,” board President Elaine Wynn said.