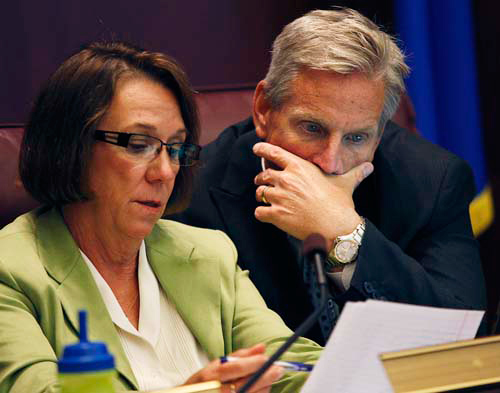 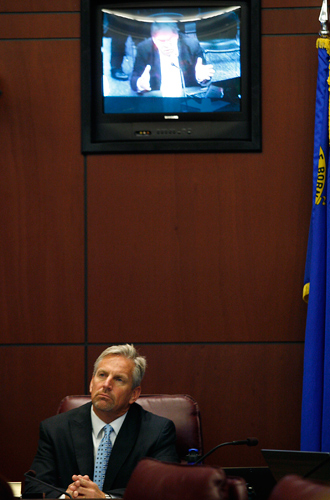 The man who could decide the future of Southern Nevada’s water supply is not a politician or top-level administrator.

He wasn’t appointed by the governor. He isn’t even a department head, and his job title barely hints at what he’s paid to do.

As Nevada’s top water regulator, King decides how best to appropriate and reallocate what is arguably the state’s scarcest and most precious resource.

The 50-year-old bureaucrat and licensed engineer is now on the clock in what some have called the most important water case the state has ever heard.

The Southern Nevada Water Authority wants to pump billions of gallons of groundwater a year from the rural valleys of eastern Nevada and send it to Las Vegas through a multibillion-dollar pipeline stretching more than 300 miles.

King will decide how much groundwater, if any, the authority is allowed to tap.

His ruling is expected by the end of March. First he must review everything he read and heard during a marathon state hearing that wrapped up Nov. 18 after six weeks of testimony, 82 witnesses and tens of thousands of pages of documents.

People on both sides of the issue say they trust him to give the project a balanced review.

This will be King’s first ruling concerning the controversial pipeline.

His predecessor granted the authority some water for the project in 2007 and 2008, but the Nevada Supreme Court overturned those decisions early last year and ordered the state engineer to hear the matter again.

A WINDING JOURNEY TO WATER

King was born in Albuquerque, N.M., in 1961, a few years after his parents relocated to the Southwest from North Dakota.

He knew he lived in an arid place, but he didn’t pay too much attention to water issues growing up. He was always more interested in building things.

After high school, King enrolled at the University of New Mexico. He paid his way with rough carpentry, hammering up the frames of new homes over the summer and part-time during the school year.

“It’s gratifying work,” he says. “When you’re done at the end of the day, you’ve got something to show for it.”

King earned his degree in civil engineering in 1986 and spent the next two years as a project manager at commercial construction sites, mostly schools, churches and strip malls around Albuquerque.

He moved to Las Vegas in 1988 to take a job at the bustling Nevada Test Site, where his brother worked as a geophysicist in the Cold War cottage industry of underground nuclear testing.

King’s role was to design the concrete and steel structures used to hold instrumentation for the blasts.

He figures he participated in the detonation of about 20 nuclear weapons and, in an ironic twist, helped contribute to the contamination of groundwater beneath a wide swath of the Nevada desert.

The engineer in him couldn’t have been happier.

“It was exact structural design work,” King says by way of explanation.

The only problem was his daily commute, 90 miles each way, which put a strain on his young marriage.

“I was spending a lot of time on the bus,” King says. “I loved the work I was doing at the test site, but I needed to spend more time at home.”

In the spring of 1991, he landed a job at the Las Vegas office of the Nevada Division of Water Resources, where he compiled well-pumping inventories, signed off on new subdivisions and took an on-the-job crash course in water regulation.

“It was a huge learning curve, and it was a huge departure from what I was doing,” he admits. “I didn’t know anything about Nevada water law.”

King’s education came at a pivotal moment for water management in Southern Nevada.

It was the last serious attempt to control growth in the valley, and it touched off such an ugly fight among local leaders and developers that water officials now jokingly refer to it as the “Valentine’s Day Massacre.”

The freeze on so-called “will serve” letters lasted about 18 months and led to creation of the Southern Nevada Water Authority, a new regional agency meant to stop local water providers from fighting with each other over the state’s Colorado River allocation.

King and his wife, Valerie, welcomed their first child in 1992. They transferred to Carson City in November 1993 because they wanted to raise their family in a small town with four seasons.

Since then, King has been promoted through the ranks, first to chief of the engineering and dam safety section, then chief of water rights and eventually deputy state engineer.

He was named state engineer in April 2010.

He doesn’t have to worry about spending too much time away from his family these days. His wife of 25 years works as a chemist for the Nevada Division of Environmental Protection. Her Carson City office is on the floor directly above his.

OF PIPELINES AND PRESSURE

Pete Goicoechea is no fan of Southern Nevada’s pipe dreams.

The Eureka County rancher and five-term assemblyman thinks the authority will wind up paying too much money for too little water, while taxpayers and water users get stuck with the long-term environmental costs.

“In my mind, it’s a very expensive Band-Aid,” he says.

Goicoechea is counting on state regulators, backed by some of the nation’s toughest water laws, to give the project a hard but even-handed review.

He hasn’t always seen eye to eye with the Division of Water Resources — as a Eureka County commissioner he was directly involved in a lawsuit against the agency — but he says he has “a ton of respect” for the current state engineer and his staff.

Goicoechea expects the “800-pound gorilla” that is Clark County to try to bully King and company, but he is confident they won’t be swayed by influence or intimidation.

“It’s going to have to be good science before they’ll allow it,” he says of the pipeline project.

All the talk of political pressure from Southern Nevada seems a little mystifying to SNWA’s Entsminger.

“I know there’s not going to be any pressure by the water authority. We made our case in the hearing room,” he says.

There is also a perception among some people that the water authority always gets what it wants, but “that’s not necessarily our view of it,” Entsminger says.

“We’ve never gotten anywhere near as much water as we’ve asked for,” Entsminger says.

Not that he or anyone else from his agency is complaining. Authority officials have always been careful to use words like “measured” and “conservative” to describe past state rulings on their groundwater project.

It’s reasonable to expect something similar this time around — a ruling from King that grants the authority a portion of its request but requires the water to be developed in closely monitored stages. As Entsminger puts it: “Government involves striking a balance between interests.”

Perhaps King can take some solace in this: The issue is likely to wind up in court no matter what he decides. If he grants the authority too much water, opponents will sue; not enough, and the water authority will sue.

“I’m reluctant to say absolutely that it will be litigated,” Entsminger says. “But it was last time.”

THE ROOTS OF A RULING

Nevada’s state engineer may not have thought about water much when he was a kid, but he certainly does now.

Any time he drives past a farm or ball field, he takes note of where its water comes from, how it’s being used and whether it’s being wasted.

“That’s what I live and breathe,” King says.

The Southern Nevada Water Authority wants rural groundwater to feed future growth and provide a backup supply for a community that gets 90 percent of its water from the Colorado River.

Opponents want to block the project, which they say will ravage the environment and destroy the lives of rural residents.

And then there is King, smack in the middle.

For his part, King says he isn’t feeling any outside pressure to rule one way or the other on the authority’s groundwater applications. But decisions like this carry their own inherent pressure.

“You certainly feel the weight of the hearing,” King says. “I keep going back to the water law. Our office doesn’t do what we want to do; we do what the law guides us and tells us to do.