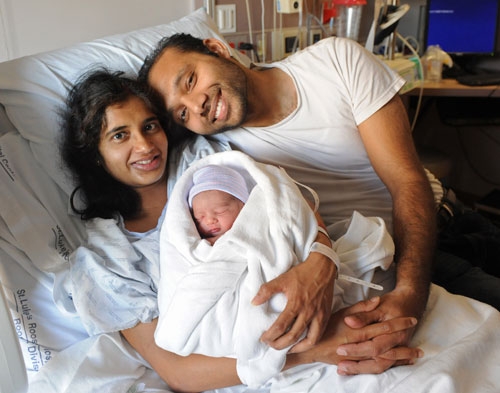 NEW YORK — A New Jersey woman got the morning commute of her life when she gave birth to her first child on a PATH commuter train to New York.

Rabita Sarkar, 31, who lives in Harrison, N.J., said she had started feeling contractionlike pains but didn’t think they were real because her baby wasn’t due yet. She and her husband, 30-year-old Aditya Saurabh, decided to travel into the city to have her checked out Monday.

They didn’t want to drive and decided to take the train from Harrison into the city instead, thinking they could then take a taxi to Manhattan’s Roosevelt Hospital, where her doctors are.

"It’s just that this guy had other plans, and he came out earlier," Rabita Sarkar said, holding her infant son in her arms, said from the hospital.

The couple declined to reveal the boy’s name and due date.

It was on the train ride that Rabita Sarkar started feeling her pains come more quickly, and she told her husband to check what was happening to her. He looked and saw that his son’s head had already started to come out.

Aditya Saurabh said that with guidance from another woman on the train, he was able to deliver the baby around 10 a.m. Fellow riders offered encouragement, and the couple said one little girl offered her jacket to keep the baby warm.

PATH officials turned the train into an express, bypassing most stops so that it would get to its final stop, 33rd Street in midtown Manhattan, as soon as possible. Emergency services personnel met the train and took the family to the hospital.

The responding police officers said it wasn’t unusual for women to give birth in facilities run by the Port Authority of New York and New Jersey, which operates the PATH and area transit hubs.

The biggest issue was the winter temperature, around 30 degrees outside, and making sure the baby was warm, Sgt. Mike Barry said.

"That’s our biggest concern," he said. "We know that baby’s body temperature is going to drop like a rock."

For one of the responding officers, delivering a baby in these circumstances was something familiar — because it happened to him.

Officer Atiba Joseph-Cumberbatch said his son didn’t want to wait, either, and came out early — so Dad had to deliver him.