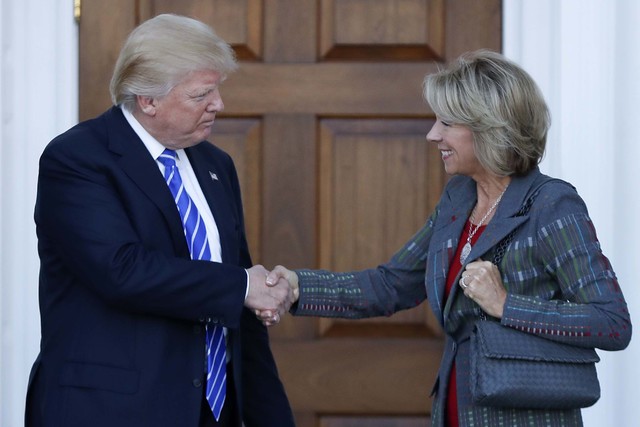 There are many terms used to describe Betsy DeVos, President-elect Donald Trump’s nomination for Secretary of Education.

Champion of school choice. Mega-rich enemy to public schools. A radical agent of change to the nation’s K-12 system.

But there’s very little that DeVos — the former chair of the American Federation for Children, a national advocacy group for school choice — has said herself. That’s probably because she’s awaiting the increasingly contentious Senate confirmation hearing for her new post.

Yet the DeVos family influence has certainly been evident in Nevada, a battleground state for school choice.

The Nevada Federation for Children gave $66,500 in campaign contributions leading up to the 2016 election — mostly to state Republicans, the party that supported the Education Savings Account program that’s now in limbo.

The national federation has been closely involved with two school choice programs here, according to the group’s national communications director Matt Frendewey — the education account program and the Educational Choice Scholarship program that gives tax write-offs to businesses that contribute to scholarships.

“We’re focused on advancing school choice, and first and foremost to the least among us,” Frendewey said.

Frendewey noted that the organization wants to make sure that parents have choice in a model that best fits their state.

“It’s not a matter of opposing traditional schools or opposing one system or trying to be anti-public schools,” he said. “It’s a recognition that there’s some great public schools out there, but for too many kids — and oftentimes it’s those who are in economically depressed situations — the schools have been systematically failing for years.”

That sounds like a familiar argument for two of Nevada’s contentious initiatives: the education account program that establishes school vouchers, and the Achievement School District that converts underperforming schools to charters.

If confirmed, DeVos would certainly become even more of a lightning rod. She’s already garnered plenty of criticism from traditional public school advocates, including the teachers unions that stand to lose from such programs.

“She has lobbied for failed schemes, like vouchers — which take away funding and local control from our public schools — to fund private schools at taxpayers’ expense,” National Education Association President Lily Eskelsen García said in a November statement. “These schemes do nothing to help our most-vulnerable students while they ignore or exacerbate glaring opportunity gaps.”

But Amanda Morgan, public and government affairs director for the Educate Nevada Now group that’s fought against the education account program, said that DeVos shares the group’s value that every child deserves a fair chance to succeed.

“I think that we’re all coming from the same place,” Morgan said. “Even if we have different strategies on getting there.”