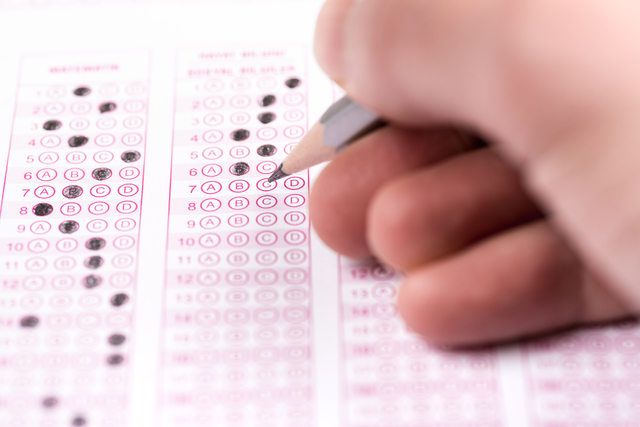 If the Achievement School District survives, poor test scores could mean some schools will convert to charters. (Thinkstock)

This week, I put myself in the shoes of roughly 150,000 students across the Clark County School District: I took part of the Smarter Balanced test.

It was an unnerving trip back to eighth grade.

I tackled a math portion and quickly realized linear equations were a fuzzy memory. It took me roughly 45 minutes to complete the 33 questions on the computer-based exam as I struggled to figure out the possible values of “x” in x3 = 375.

But imagine the testing experience for students and teachers, particularly at this critical time — if the Achievement School District survives, poor test scores could mean some schools will convert to charters.

And this year, achievement data are now 20 percent of a teacher’s evaluation. Next year, it’s 40 percent.

Sorensen teaches seventh-grade science, so his students are not tested in his subject — the Smarter Balanced test is only in English and math for grades 3-8. Yet he still says the tests rob him of valuable instructional time.

And though Douglas County has different demographics and challenges than the massive Clark County School District, he can still see things from a different perspective.

“If I taught in a poor neighborhood in Clark County, I’d be really, really worried about how my students were going to do,” he said.

Rebecca Meyer, the district’s director of assessment, said part of the way to address testing anxiety is to change the way they talk about assessment.

“Using it as a tool for communication about progress — knowing that there’s a path of support — versus this punitive measure really changes how students feel about testing,” she said.

So far, state and local officials say administering Smarter Balanced tests has gone smoothly. It’ll be the second successful year of administering it in Nevada, an improvement from the testing fiasco of 2015.

The testing glitches that year — when Nevada first switched to computer testing and Smarter Balanced — resulted in multi-million dollar settlements, not to mention a halt in accountability ratings for the year.

“The fact that Nevada successfully tested last year really speaks lots for the work that the districts got done to establish an infrastructure that can support the testing load required,” Zutz said. “Based on the experience last year, (we see) no reason not to expect success this year.”

I didn’t calculate my practice score — partly because I didn’t want to see how badly I flunked eighth-grade math. But right now, students across Nevada are facing the test with real implications.

4
VICTOR JOECKS: Biden talks frequently about unity. But he’s silent on how Democrats polarize the country for political gain.

5
Woman accused of attacking man with blowtorch in Las Vegas